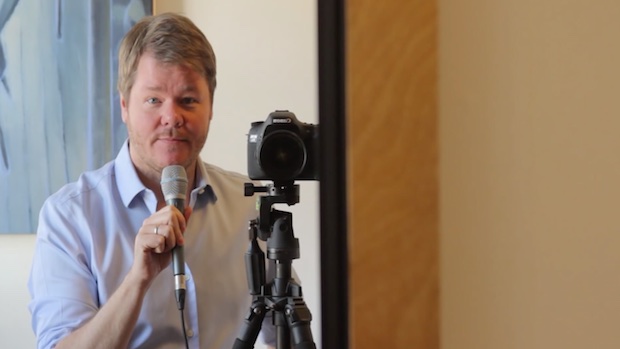 Everything is a Remix, Kirby Ferguson, VHX

Kirby Ferguson’s four-part web series, Everything is a Remix, was a brilliant blend of form, content and delivery system. A discussion of not just the legal issues surrounding fair use and appropriated content but also the nature of creativity itself, Ferguson’s work scored hundreds of thousands of views, launched a TED talk and established this savvy director at the forefront of the DIY web content creation business. With his new recently launched series, This is Not a Conspiracy Theory, he is aiming to make that web content creation business more of a, well, business by switching from free to a subscription model. Ferguson Kickstarted the early development of the project and is now charging $15 for the entire series. Subscribers can stream or download each episode individually, and, when the series is complete, watch them all as one complete movie.

Like Everything is a Remix, This is Not a Conspiracy Theory uses various forms of archival footage and Ferguson’s inviting voiceover to walk us through its topic’s history and intellectual foundations. But if the production and distribution of Everything is a Remix neatly fit into the internet’s fair use ethos, This is Not a Conspiracy Theory seems almost oppositional to the web. Tracing not necessarily conspiracies but the development of the conspiratorial mindset, it’s unlikely to be linked to on Prison Planet, Info Wars and other sites for alternative current events and near histories.

In addition to conspiracies, This is Not a Conspiracy Theory has one other subject matter: the economy of web series. Alongside the episodes are video updates on the project’s financial progress. Ferguson intends to work 55 hours a week to produce and release one episode every four months and to earn a salary of $42,000 a year doing so. So far he’s raised about $36,000 from 2,160 subscribers. How to make the project better, faster and to boost its revenue are topics Ferguson is frankly discussing, making This is Not a Conspiracy Theory a real time case study as well. Below, we ask Ferguson five questions about his project. Watch the first episode below, consider subscribing here.

Filmmaker: When did your interest in conspiracy arise, and at what point did you decide to make it the subject of your latest web series?

Ferguson: I love the idea of conspiracy theories — that they try to reveal the reality that’s right under your nose — but they’re pretty much always disappointing. They’re poorly sourced, poorly argued, and generally wrong. However, unlike many skeptics, I have some affection for the genre’s aspirations and I’m not much interested in ridiculing it. I’m attempting to do the same thing as a conspiracy theory — to the frame the world in a new way — but I think I’m using solid materials and techniques. I’m not trying to give people a specific conclusion, but rather a tool of mind that they can use to interpret the world.

Filmmaker: What lessons — business, community, artistic — did you learn from Everything is a Remix, and how did those affect your decision to develop and launch the new project?

Ferguson: The huge thing I learned was that I could honestly follow my interests in a story while still appealing to a large audience. I thought my potential audience was way smaller than it turned out to be. I also learned that having a popular free video series attracts plenty of opportunity but it’s still a precarious lifestyle. You’re very dependent on what the wind blows your way. For the new series I chose to sell it and trade off a huge amount of viewership in exchange for income. It’s not yet a living but that income really helps.

Filmmaker: What sorts of technologies and front-end solutions are you using to connect with audiences?

Ferguson: VHX and Vimeo On Demand are my two platforms for the selling and distributing the video content. Twitter is my most active social media outlet and we also have a new site which will be delivering regular free content.

Filmmaker: The internet is a haven for conspiracists, so the title of your webseries is almost one of counterprogramming. To what audience are you directing this series? Conspiracy fans, skeptics, fans of your first series…? And what direction do you see the series going in some of the later episodes?

Ferguson: It likely appeals to skeptics most and there’s been plenty of carryover from Everything is a Remix. But honestly, this is a realm in which I’m fairly impractical. It’s so difficult to write something this large scale that has a strong argument and is entertaining and interesting for me to work on for an extended period. The potential market is a variable I just can’t work into that equation. I think this is an area in which creative interests should rule, because success is always an iffy prospect.

After Episode Four, the realm of conspiracy will get left behind and I’ll start to show the future is mostly not intentionally planned by anyone and is much more profoundly influenced by seemingly inanimate forces like technology, rules and institutions. Somehow I will make this material fun.

Filmmaker: You recently announced your financial goals and the raise so far in a status update, making This is Not a Conspiracy Theory perhaps as much of a work about the possibilities of new business models as a show about conspiracy. What assumptions did you make going into this series about support, and how are those assumptions being challenged?

Ferguson: Yeah, there’s two kinds of videos I put out: episodes and updates. The episodes are the installments of the documentary and they’ll get joined together into a film when they’re all done. But because they takes months to make, in between I post updates about what’s going on. They’re like a making-of featurette that plays out while the film is still being made. So the finances are a realm I’m trying to improve and I spoke frankly about that in the last update, but I won’t necessarily continue talking about that much.

I have to admit, I thought my previous success would convert into more sales, and it helped a lot, but it is just very difficult getting people to pay for things on the internet. You need to be a businessperson as well as an artist, and I’m just now starting to address that shortcoming.

Filmmaker: Finally, you’ve mentioned a new project you and your wife will be doing. Can you tell our readers more about it?

Ferguson: Absolutely, it’s called Loop and it’s a free, monthly-ish series about our life as a creative couple running a small media business. So it publicizes This is Not a Conspiracy Theory, but I think it’s something that could interest an independent audience as well.

In the show we state challenges — goals we’re going to try to hit — then we give live updates through social media over the next thirty days on our results. After that we report back in a video on our results and share what we’ve learned. The reason it’s called Loop is because there are five themes to the challenges — cash, quality, marketing, admin and giving back — and we cycle through these repeatedly, trying to keep making improvements. The series should launch in early 2015.