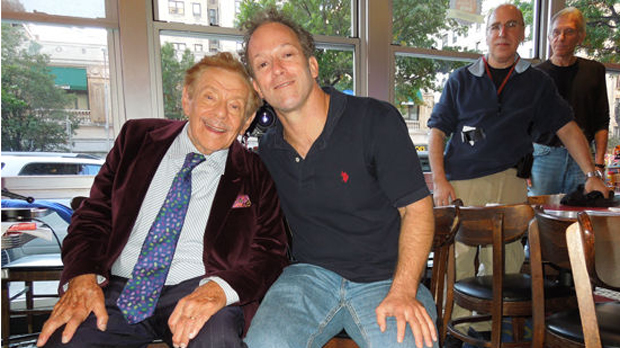 Making sandwiches may not seem to make for compelling cinema, but that’s exactly the activity around which documentarian Erik Greenberg Anjou (above right, not left) sets his newest film Deli Man. The film goes beyond that, of course, exploring the ways in which deli food and deli culture are a fundamental aspect of American Judaism. Anjou’s previous two films, A Cantor’s Tale and The Klezmatics: On Holy Ground, dealt with the same themes by exploring different components of Jewish life; Deli Man may feature a more lighthearted tone — evidenced by the proliferation of veteran Jewish comedians in the film — but the questions it explores are no less integral to the Jewish experience. If anything, they are perhaps even more pertinent given the number of other Americans who have enjoyed deli cuisine, a classic brand of American comfort food, over the years. What gives the film its weight is the rapid disappearance of delis not just in New York but across the country, victims of gentrification and homogenization.

Filmmaker: First, I’m interested in how you came to this topic. Your two previous films were about Jewish music, including sacred music. How do you see delis within the context of Jewish culture?

Anjou: I’m interested in a question that has a very elusive answer: what makes a Jew a Jew? Particularly in a post-World War II and American context. What is that hook, that spark, outside of a codified religious commitment that roots us to tradition? On consecutive visits to Houston, Texas I had met deli man Ziggy Gruber. I’d also been introduced to a book by David Sax named Save the Deli. There was a staggering statistic in that book, citing the monumental disappearance of the Jewish deli — some 150 stores currently exist in all of North America. In the 1930’s there were thousands of kosher shops in the five boroughs of New York. So…why? What happened? Replace the word “deli” with the words “cantorial music,” or “klezmer music.” The staggering diminution, the ghosting of the old neighborhood block, is the same. So, I’m on my own trail, exploration of cultural reclamation, and I met Ziggy in Houston. Here’s this youngish guy who is a master of his craft who’s fueling and sustaining this reclamation in his own way, through delicatessen food, and he’s putting asses in the seats. I said, “That’s it! Time to start fundraising.”

Filmmaker: So you’re focused on different expressions of the culture. But there’s also a way that food figures into spirituality, or, at the least, community and fellowship (as in the ritual of “breaking bread” with someone). Films like Babette’s Feast and Eat Drink Man Woman are built around that; do you think the same concept entered into your thinking while making this film?

Anjou: Those are gorgeous, accomplished films. I wish I could say they helped me make mine about a Jewish deli, but, no, I didn’t consciously reference them. The lore, the allure, of delis is so strong — from family, the biz itself, the chain of Jewish comedians who convened there… At the core of the word Deli is Community. Connection. My hope — and thanks for referencing those movies — is that whereas Deli Man may be a look at “Jewish” food, the film’s premise reflects the same ethnic longing and underpinnings as those of other cultures.

Filmmaker: Maybe those aren’t the best films to reference, but there’s also arguably a subgenre of films about running restaurants — Jiro Dreams of Sushi, narrative films like Big Night, Today’s Special, and of course Tampopo. What’s different about the deli industry from the culture surrounding five-star restaurants or fast food chains?

Anjou: Jiro Dreams of Sushi is a beautiful film, and beautiful to look at. Big Night is a small masterpiece. But, I’m embarrassedly not a foodie. Any good film is ultimately character-driven. For me, deli is the medium, not the message. Jay Parker in Queens or Ziggy Gruber in Houston put forth the same amount of thoughtfulness and excellence in preparing and delivering their food as any five-star chef. The difference would be attitude, of customer and server alike. A waiter at Jean Georges isn’t going to challenge or chide you. Provoke your server at a worthy deli? Good luck, bubbele.

Filmmaker: Can you tell me a bit about your production process? Delis seem like an intriguing milieu to explore, but how did you transform that concept into a cinematic narrative?

Anjou: I think our production process — how to make sense of it given budgetary woes and their concomitant stress — is probably consistent with a lot of other documentaries. I did as much research as possible, meeting and pre-interviewing deli men and visiting their stores. Alongside this research was, yes, budget. I’m New York-based, as is my principal crew. So how to create and budget time for substantial production slugs in Houston? For several days in L.A.? As the film evolved, it became clear that its emotional high point wasn’t going to unfold in Manhattan, but in Budapest, Hungary. So, how the hell am I going to make that happen when I’m still paying off my devoted crew for past shoots? A lot of challenges.

Documentaries aren’t scripted, they happen in the moment. You miss the moment, you miss the film. In hindsight, my hope is that Deli Man will seem “obvious.” But making it wasn’t obvious at all. It took three and a half years. In the editing room, I was blessed with the collaboration of Lisa Palattella, who I worked with on the Klezmatics documentary. Lisa isn’t “just” an editor, she’s a storyteller with her own rigorous narrative skill set. Editing this film was a beast. We had a largely talky and talking-head picture that we wanted to shape as a traditional three-act narrative and never have it feel wooden or lethargic. The nature of deli wouldn’t allow it. We’d get creamed — or at least bludgeoned with a hard salami in the kosher joints.

Filmmaker: How are you handling the marketing of the film? There seem to be niche audiences who would be interested in Jewish-American culture or food; how are you trying to access them, and how are you reaching out to a broader documentary film audience?

Anjou: As a marketing guru once said, “Niche the niche.” I’m thrilled to be working with Cohen Media Group to distribute Deli Man. It’s really exciting for a documentary like this to get a theatrical release — it’s a big compliment, and affirmation. There’s an active circuit of 100+ Jewish film festivals that showcase films such as Deli Man. There’s food platforms and like organizations, TV and cable. The heart of the film really speaks about generation-to-generation culinary and cultural transference. The surviving delis are largely those which are being perpetuated by the sons and daughters of the deli men themselves — the same deli men who have pleaded with their kids to become doctors or lawyers or accountants so they wouldn’t have to go to bed after an eighteen-hour work day smelling pickling brine. The Jews aren’t the only folks who are concerned about sustainability and perpetuity. So alongside a great team, we’ll try to introduce Deli Man to as many groups and individuals from various backgrounds as possible. Remember that old advertisement — “You don’t have to be Jewish to love Levy’s.”