Drive, He Said: A Most Violent Year 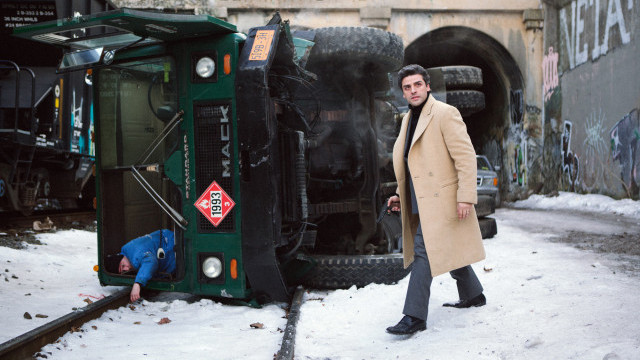 The guy’s a tease. Up until the end of Margin Call (2011), the debut feature of A Most Violent Year director J.C. Chandor (All is Lost), our moral compass in the story of a New York investment firm at the onset of the 2008 financial crash is brainy risk analyst Peter Sullivan (Zachary Quinto). The young MIT graduate is so upright that he not only disentangles the masked electronic numbers signaling impending doom for those who can least afford it but also allies himself with the mid-level powers who prefer to forestall than cash in. In the penultimate sequence, once he does a 180 and joins forces with the sleaziest of the corporate powerbrokers, we are unable to fully detach ourselves from identifying with him. Chandor questions our humanity when he demolishes Sullivan’s.

Chandor jerks the viewer’s chain right from the start of A Most Violent Year. The title is not a misnomer, but it is intentionally misleading. It refers to 1981, when the crime rate in New York reached an all-time high. It came just after the city’s insolvency in the ‘70s and the resulting cuts in services, as well as the disintegration of the Bronx precipitated by the conceptual heartlessness behind the opening of the Cross Bronx Expressway. It marked the apex of the pre-crack purchase price for heroin and witnessed the Crown Heights riots and the rise of the Guardian Angels.

Ironically, this Dreiser-and-Lumet-inspired concoction barely touches on the gist of the problem, the burglaries, assaults, and homicides that caused the graphs to spike. The lead couple played by Oscar Isaac and Jessica Chastain attempt to build their lives distant from society’s grime, though seep in it does. And most of the film’s scant physical violence takes place off-screen. The film’s focus is on other forms of violence. Take economic: Crooks hired by the competition hijack trucks tanked up with expensive heating oil (does anyone recall OPEC’s near-shutdown of the oil supply in the ‘70s?) In fact, the injuries suffered by drivers are less painful than the financial blow. And political: According to ambitious Assistant DA Lawrence (the ubiquitous David Oyelowo), who is bent on cracking down on the industry, the companies are force-feeding one another a taste of what they have been doling out to consumers. Yet this zealous enforcer of the law ends up celebrating the potential for power arising from détente. As in Margin Call, there’s profit in the spoils.

In yet another theme repeated from that film, a protagonist takes the high road. Here, though, he tosses off noble sentiments in spite of an ethical history that is less black and white than gray all over. Chandor and Javier Bardem parted ways over the script, because, as the director claims in an interview, the Spanish actor insisted on a more clearly differentiated moral conflict. Enter Isaac. His Abel Morales is a Latino immigrant who has successfully reinvented himself as a polite, controlled and slightly haughty entrepeneur. DP Bradford Young lights this self-assured man and his backdrops as if he were, in Chandor’s words, “creating his own tableaux.” (The part is a far cry from Isaac’s turn as the titular folk singer with a chip on his shoulder who didn’t quite make it in the Coen Brothers’ Inside Llewyn Davis.)

Morales began his career driving for the Standard Heating Oil Company, married the mob-connected boss’s daughter, Anna (the even more ubiquitous Chastain), and bought the business. He becomes the embodiment of the American Dream, to which his Breueresque suburban manse, well-appointed wife, and dapper wardrobe attest. (Chandor demonstrates his fealty to the project through John P. Goldsmith’s production design and Kasia Walicka Mamones’s costumes — pricey cashmere coats and unsubtle jewelry that smack of new money.) Like his biblical namesake, Morales is righteous, but upward mobility has left cracks in the facade. Besides price gouging, he poached a rival’s turf early on and has always distorted his outfit’s records.

The most disturbing detour from Morales’s self-professed ethos of ethical propriety is his mishandling of the driver Julian (Elyes Gabel), a more recent arrival from Latin America. He quashes his opportunity for advancement, a deserved move into sales in light of his long recuperation from a broken jaw during a theft. Then he sells him out. Julian becomes the sacrificial lamb in a politically motivated barter with Lawrence and the cops after a botched heist from which the traumatized driver flees with an illegal weapon that he carries–understandably, given his past experience. What do you call this particularly vile form of Social Darwinism, in which double-crossing one member of the community accelerates the rise of another? Antisocial Darwinism?

Later Morales advises the perplexed man (“I tried to do things right”), who is unable to digest his predicament: “I know what you wanted but you have to forget that now.” Julian is Morales’s double, the failure he might have been, the shadow that reminds him that his is the luck of the draw. The fix the driver finds himself in is resolved with consequences so unpleasant that they take you completely by surprise. If there were an Oscar for best actor in a single scene, Gabel should win for his mad soliloquy on repentance and despair.

Morales may be the film’s principal, but Chandor’s empathy is with the bedraggled Julian, trapped in an inescapable loser’s web not of his own making. “America for Me,” composer Alex Ebert’s song over the final credits, is a fragmented, gut-wrenching lament set to a beat machine from the rare point of view of a secondary character, one whose American Dream has turned into a nightmare.

Besides Morales’s angst over robbery, the other plot point driving the narrative is his near-futile effort to raise the money necessary to annex the Hasidic-owned Old Bayfront Terminal adjacent to his landlocked property. If successful, he gains riverfront access and a sizable increase in storage capacity. If not, he loses everything: The fellow has both government and industry breathing down his neck. Anna’s savvy twists rather than turns the tables in his favor, once again putting his convictions to the test.

Bewigged in blonde, Chastain plays to perfection this sassy, smoke-ringed update of Stanwyck’s Phyllis Dietrichson in Wilder’s Double Indemnity. She can’t resist challenging her husband’s masculinity. When he wimps out of putting a deer his car has hit out of its misery, she shocks him and us with a loud bang from the pistol she has tucked into her designer bag. A gun being the phallic signifier, Morales fails on the discharge front. Anna even calls him a “pussy.” A man in a business as schmutzig as heating oil in the early ‘80s is not expected to back down when it comes to guns. They pop up so much here that collectively they can be considered a character. Like Julian, the other drivers start packing heat. Another gun figures prominently in an otherwise picture-postcard-perfect scene. When a human is at the other end of his gun, Morales faces a dilemma both psychological and moral.

At once heavenly and infernal, A Most Violent Year is the revisionist neo-noir many have been waiting for. In Margin Call, Chandor shoots New York in a cold style appropriate for a narrative about machinations among the white-collar privileged. He inserts aerial views circling the tall buildings of high finance. If Margin Call valorizes the vertical, A Most Violent Year embraces the horizontal. The film is grounded. Young’s widescreen shots of the city are flat, filmed from street level, even if some include the full height of skyscrapers. Visually, it is frequently very dark, the action typically taking place in barren industrial enclaves. Ebert’s exceptional score sounds ominous chords. Chandor has himself done some successful reinventing.