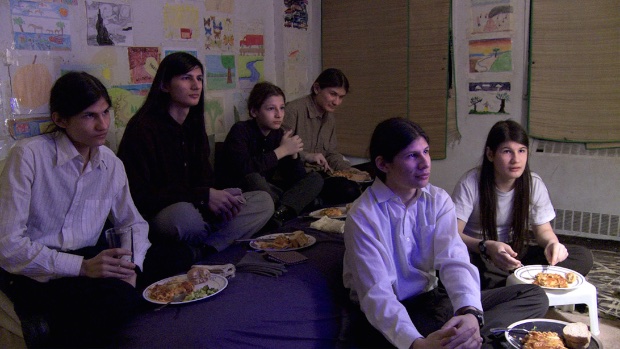 We all grow up with our own peculiar “kid logic,” a warped worldview shaped by the limits of our childhoods. We think our parents are normal. We think everyone is like us. But we know there are things beyond our own experience — countries we’ve never visited, people we’ve never met — and we build images of those places in our minds. Then, we grow up, and if we’re lucky, we get to go somewhere. We visit those countries, and meet those people. Gradually, the reality of new experience replaces the pictures we had painted with our imagination. We learn how things really are, for better or worse.

The experience of the Angulo brothers — profiled in Crystal Moselle’s documentary The Wolfpack – was something else entirely. Raised hermetically in a cramped New York City apartment, all six boys were forbidden access to the outside world until well into their teenage years. But they were allowed to watch movies. Lots and lots and lots of movies. So they began to reenact the movies on a home video camera, rebuilding them with props and costumes fashioned out of what they had handy in their house. Eventually, one of the brothers escaped, bringing them all out into the outside world. The Wolfpack follows what happened, and how they changed.

The Wolfpack premieres Sunday, January 25, in the Documentary Competition of the Sundance Film Festival

Filmmaker: How did you find out about these boys?

Moselle: I was walking down First Avenue in the East Village when these six striking young boys with long hair ran past me. My instincts kicked in, and I chased after them inquiring where they were from — there was something very different about these kids that I couldn’t put my finger on. They said they were interested in getting into the business of filmmaking, which I loved. Shortly after that we sat together in Washington Square Park, checking out cameras and talking about movies.

Filmmaker: What made you sure that this could actually be a movie?

Moselle: I have never in my life been so passionate about something — I wasn’t going to stop until it was finished. I just knew. So many people along the way told me that it wasn’t possible, but I didn’t listen.

Filmmaker: How did editor Enat Sidi come into the project? Can you talk about ways in which she changed the film, and how the story changed during the edit?

Moselle: I had tried to work with a few editors before Enat, and it just wasn’t right. We reached out to her to see if she could recommend a junior editor who was great. After hearing the story, she became interested in the project. We were thrilled. Instead of approaching the film in a literal way she focused on emotion. We started building scenes and sequences in a way that invoked the feeling that we wanted to create, rather then a timeline of “this happened, then this happened.” She stripped away so much that was extraneous and brought out the true heart of the film.

Filmmaker: What were some of the challenges — if any — of earning the boys’ trust? Was there any concern on their part that you were there to make fun of them, things you felt you needed to hold back?

Moselle: It wasn’t a straight road earning these guys’ trust. I was dealing with adolescent teenagers with a particular upbringing that had been based on fear. I don’t think they were ever concerned that I was making fun of them, but they wanted to know what the film was going to be and the intention behind it. As time went by, the bond grew between us and they came to trust me. Once we figured out the story we were going to tell, there was no holding them back.

Filmmaker: There’s something that happens to everyone when you’re growing up, which is that you start to realize that what you think is normal isn’t, that you realize how specific your background is, and have to learn who you are in a much greater context. The experience of these boys seems like it must be some surreal, extreme version of that. What’s their relationship like to the footage of themselves now, considering they’ve been in the outside world and exposed to media for several years? Are they still finding their way in the real world?

Moselle: Since their only reference to the outside world was film, at first they found everything surreal. They didn’t just go out into the world; they went out into NYC. It was fascinating to watch how quickly they were able to assimilate, with limited fear of the unknown. The older brothers are now out getting jobs in creative fields and making their dreams a reality. They were so hungry for first-hand experience all those years, and now they are getting it in full. The boys that have watched the film so far have commented and laughed at how naive and different they were in the beginning. They also were surprised to find out how their brothers had expressed living though the circumstances individually. It’s a pleasure to see them realize how far they have come as individuals and as a family. It’s an ongoing process for them, but they are soaking it all up so beautifully.