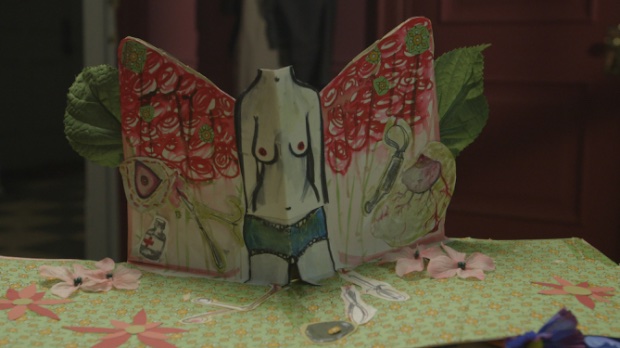 Bringing the turning pages to life is cinematographer Catherine Lutes, who below talks about the Canon C300, realizing the film on a tiny budget and accenting special visual moments.

Lutes: Stephen Dunn the director is a good friend of mine, and we had done another short film (Good Morning – directed by Stephen Dunn and Peter Knegt) with absolutely no budget the summer before, so I think he knew I was up for a fun project with interesting content that didn’t necessarily have much budget behind it. We also got lucky with timing as I had just finished a feature and had some free time and he was just about to go shoot his first feature. So we took advantage of a small window of time and just went out and shot them over a weekend.

Lutes: Working on such a small scale (the films are pop up books on a table) and wanting to bring movement to the films was a challenge with the budget we had. But a friend and fellow cinematographer, Alan Poon, came onboard with a mini motion control unit that we used to get some movement. We were using it more as a real time jib, slider unit than for too many controlled computer-programmed movements, as we didn’t have much time for that. But we did do some programmed moves, which really helped keep things steady and bring some nice smooth movements. We had also debated shooting the books on plain-colored backdrops at one point, and we thought putting them into a space that had a context would help bring some intimacy to the stories. Thankfully, our producer, Holly O’Brien, had access to a few existing TV sets, and we were able to bring some fantastic production value, and add some depth and lighting to the background by shooting there, which really helped add a nice personal touch to the stories.

Lutes: We shot on a Canon C300 with old Nikon prime lenses. Partially the choice was made because of budget, but I also use that camera often to shoot docs and shorts, and I think it can be a really great camera for the right project. I like using the older lenses to add a bit of softness to the image. When you are doing something small with very little crew it is a really powerful tool that is super easy to manage and still gives you a great image.

Lutes: In general I tend to lean towards naturalistic lighting. I like lighting things with a sense of heightened realism, but every project calls for its own style. With these films we wanted them to be a bit poppy, but to focus on the books. Because we were working on such a small scale, and each page of the book had its unique shapes and elements to work with, it was tricky to build in a lot of shape with the lighting, and we went mostly with a soft overhead feeling. But I did find a few moments to add in a special light, or a cue just to heighten parts of the storie, or showcase the crafting of the pop up books. Also, it was nice to have the background sets to light in order to add a bit of depth and show the uniqueness between the three books. In one of the spaces the story takes place at a hotel, so we did a few car passing light gags that were fun and added some nice depth to the image.

Lutes: Much of the look was baked in. In the DI we really just added some saturation to bring some poppy-ness and life to some of the elements in the books. Because we shot in the Canon C-log mode we brought back some color but kept things fairly straightforward. Unfortunately I wasn’t able to make it to the session, but thankfully I had worked with our guys at Andino Productions before, so I think they had a good idea of my general approach to things and what I would like or dislike.