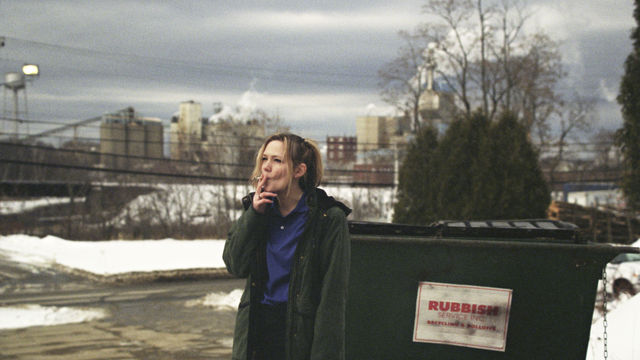 A frosty night alone inside an unheated school bus puts a hypothermic gradeschooler at death’s door. The multiple protagonists in model ensemble Bluebird milk the mishap, each in their own way. In an oddly similar fashion, director Lance Edmands works — let’s say plays — his audience. He short-circuits a chilling overview of the mishap’s immediate impact in favor of charging a profound visual essay on the power of love — ongoing, terminated, or altogether lacking.

The titles of the two mournful vintage pop songs most prominent on the soundtrack evoke cataclysms, in theory echoing the emotional toll on those most affected by the potential impending death of a child. The lyrics tell a different story: They lament lost love. Take “The End of the World,” a C&W hit first recorded by twangy Skeeter Davis in 1962, sung in a rowdy bar by trampy Marla (Louisa Krause), the boy’s reckless single mother and the most troubled of all.

Why does the sun go on shining?

Why does the sea rush to shore?

Don’t they know it’s the end of the world,

Cause you don’t love me anymore?

Or “Tragedy,” a 1959 number covered to great success by The Fleetwoods two years later. We first hear it in a seemingly innocuous scene in a five and dime. While Marla is shopping, the part-timer daughter of the unintentionally culpable bus driver obsessively turns on the activation key under a whole shelf full of snow globes — one of which will play a pivotal part in determining the course of the former’s estrangement from her comatose son. Just in case you sense closure by the end, however, the ballad rears its ambiguous head once again over the final credits.

Kissed by the snow

All that’s left is the dark below 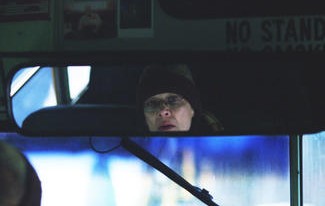 Nature as metaphor for vanished love suits the film’s story and setting: a small town hugging the mountains in snow-covered Maine. It also taps into Edmands’ cinematic crusade against counterproductive human interference with its essence. He starts the film with text from Thoreau’s The Maine Woods, which goes so far off the deep end adulating raw, savage nature that the poet ventures outside his own body, then attaches it to the elements. The film is bracketed by shots of men logging and the local paper plant pouring salt on the wound. Unfortunately, the economy of the depressed locale has long depended on an industry that deforests as an ignoble means to a commercial end. The filmmaker and inimitable DP Jody Lee Lipes depict the entire process widescreen in gorgeous, grainy, underexposed 35mm.

The catalyst for the plot pops up within five minutes of the opening sequence, which has efficiently introduced us to the five residents it will most affect. We know right away that driver Lesley (Amy Morton) is a kind pushover after she insists a hatless boy take her knit cap. Marla smokes next to the outdoor trash bin of the dive where she waitresses. Signifiers in place. Richard (John Slattery), Lesley’s husband, drives a specialized crane for the plant. We visit him and daughter Paula (Emily Meade) in their unpretentious warm home. Thanks to production designer Inbal Weinberg, the furniture and objets d’art are right on the mark for a blue-collar residence in this neck of the woods.

Now the defining moment. When Lesley checks for kids or items left behind after the bus has emptied, the tiny creature of the title flies inside, perches briefly, then takes off. The bus driver is “distracted,” she recalls later. At the beginning of work the next morning, she spots in the rearview mirror a shoe hanging over a seat. It belongs to the doomed Owen, whom she missed during those few seconds the bluebird broke her concentration. During the montage of frantic transport to the hospital and notification of family, we meet another character, the resigned, responsible Crystal (Margo Martindale), Marla’s mother and Owen’s grandmother and chief caregiver.

Love? In Lesley and Richard’s household, it’s on a permanent vacation. The sizzle went out of their marriage long ago. She knows he’s been having an affair. There is also tension between Richard and Paula, who chastises him for his infidelity, not only of the sexual variety. She screams, “You think it’s Mom’s fault and that kid’s gonna die!” Poor Paula. After she gives herself to her guy, he hints at school that he is not the faithful type either.

Marla barely acknowledges her son. She blames the kid she gave birth to at 17 for having lost a music scholarship and the opportunity to build a different life somewhere — anywhere — outside the city limits. She defends her decision not to be at the bus stop to await Owen and not to answer her cell when her mother calls to check. “I can’t keep track of every little thing!” she admonishes Crystal. She had been in the local bar and messing around with some fellow.

When Lesley comes over to apologize, Marla gets nasty before suddenly dropping her blasé posturing. “I just want to be with a real person!” she cries out through tears. She finally opens her heart just a crack for the boy. All we know about Crystal is what Marla tells her restaurant co-worker (Adam Driver) in his mobile home between puffs of a cigarette and guzzles of beer: “She had a lot of bad shit happening in her life.” We can only imagine what she forfeited, voluntarily or not.

A terrible mishap on a yellow school bus is not the only resemblance to Atom Egoyan’s brilliant The Sweet Hereafter. Once again, an ambulance-chasing lawyer from outside punctures a tenuous circle, in Bluebird an inadvertent perp, her family, and the victim’s mother and grandmother. His goal, like that of Marla and the plant in general, is strictly mercenary. As if facing possible impoverishment in a lawsuit weren’t enough, Lesley is booked for the crime of not being “responsible” by cops who take her fingerprints and mug shot.

To be sure, Edmands makes the film his own. The feel is much more local and provincial in Bluebird than in The Sweet Hereafter. The ambient C & W music (Conway Twitty, Patsy Cline, Joe Tex, for starters) inside bar, diner, and vehicles captures the mood of isolated outposts like this one. Updating a norm from classic Hollywood movies, he highlights atonement. (The exception is Paula’s immature bf, but do you expect sensitivity from a high school boy?) After both Lesley and Richard have fully undercut their jobs and reputations, they express mutual regret, the type you hear from longtime couples in exile from each other. 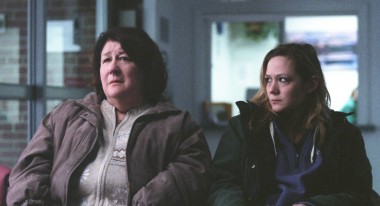 The director is clearly inspired by the great ‘50s Hollywood filmmaker Douglas Sirk (Imitation of Life, Tarnished Angels). He must have viewed on multiple occasions one of Sirk’s masterpieces, All That Heaven Allows (1955), another story set in midwinter New England, in which Rock Hudson plays a Waldenesque natural man to Jane Wyman’s proper country-club widow. The plaid in Bluebird matches the signature apparel of Hudson’s Ron Kirby. In fact, L.L. Bean is one of 13 businesses credited in Bluebird for product placement. Among the similarities between Edmands and Sirk: blocking, palette, gloomy piano, and attention to the behavior of fragmented people — moments of revelation, during what the latter famously termed the interstices of life, such as holidays, hospital scenes, and funerals.

They both make excellent use of cliché, as do all the best melodramatists. In Bluebird, however, cliché and nuance cancel each other out. For example, Edmands has obviously coached his actors to go for subtlety. When Paula’s boyfriend ignores her plea in the cafeteria for help, his eyes stray almost unnoticed toward another object of desire at the same table. The most significant instance is Lesley’s foreboding glance downward at the moment the bluebird flies away.

Morton’s entire performance, though, is nuanced, her tragedy traceable on a minimally expressive face. Low-key, withheld: Whatever you choose to call her style, it is among the most affecting acting I’ve seen over the past year. Yet the downplayed gestures do not threaten the balance of the group. The performers have varied approaches to their craft, but they merge to convey a total much stronger than the sum of its parts.

One formal trope that Edmands embraces to brilliant ends is slow tracking, either out from, or toward, a person or event, altering both scope and context. Edmands began as an editor, but he had to have realized (correctly) that cutting into those scenes would undermine the intended result. Whether you compare the film to The Sweet Hereafter or All That Heaven Allows, this recurring strategy is pure Edmands. The effect is poignant. He has a soft touch, even when Richard turns over a truck loaded with logs or smashes the face of a co-worker. Ever gentle, he leaves off-screen a car crash as well as shots charting Owen’s affliction.

I like to see continuity of support, but after Edmands attended Sundance’s Writer and Director Labs and producer Kyle Martin its Creative Producer Lab, the Sundance Film Festival rejected Bluebird. It’s probably the best sloppy seconds that have gone to Tribeca, notoriously weak on American indie premieres. This may well happen all the time, but technically and dramatically, Bluebird is so fully integrated that I think the abused word organic applies. Are mature themes and sophisticated structure outre? I’m trying to imagine Martin down on his knees, pleading with a confident Edmands, “Would you just add some god-damned flaws?”