Not a Deleuze Lecture, but What? Thom Andersen’s The Thoughts That Once We Had 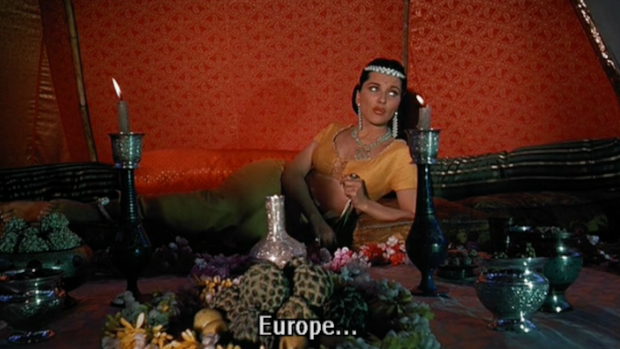 The Thoughts that Once We Had

Gilles Deleuze, Los Angeles Plays Itself, REDCAT, The Thoughts that Once We Had, Thom Andersen

I’ve heard many mistake the voiceover in Los Angeles Plays Itself as belonging to its writer-director Thom Andersen when it’s actually Encke King. A fair assumption — King speaks in a first person voiceover in a rather curmudgeonly monotone, fitting for the film’s occasionally cantankerous examination of the relationship between the physical spaces of Los Angeles and the way Hollywood films have portrayed them. The real Andersen is a more elusive character. His voice is more casual but less direct, his articulated knowledge of his own projects is tempered, bouncing around a given topic than directly addressing it. He pauses a lot as if he’s itching to get away from the crowds; he’d rather have the movies speak for him.

This might be problematic if you are going to speak at the world premiere of your new film, as Andersen did last Friday when The Thoughts That Once We Had played to a sold-out audience at Los Angeles’ REDCAT Theater. Los Angeles Plays Itself garnered the CalArts professor a cult reputation outside those who had seen his film history documentaries on Edward Muybridge (Zoopraxographer) or the blacklist (Red Hollywood). His newest project, however, is something much more indefinable, as well as exponential in scope: a personal vision of 20th century cinema refracted through the writings of philosopher Gilles Deleuze.

Even for hardcore cinephiles, understanding Deleuze is not an easy task, whose work is often relegated to graduate seminars and academic conferences. Those who have probably picked up Andre Bazin’s What Is Cinema? are much less likely to have paged through Deleuze’s Cinema 1 and Cinema 2. In academic cinema studies circles, Deleuze is an atom bomb — he entered film discourse in the late 1980s at a time when theoretical approaches to understanding cinema (the so-called “Grand Theory” tradition) were being upstaged by the new formalist methods developed by David Bordwell and Kristen Thompson. With his impossibly wordy prose, the French Deleuze also rejected the traditions of psycho-analytical and semiotic approaches to understanding cinema. In its place, however, he created a more elusive theory of cinema as a space where “thought” could be produced. His most famous thesis is his splitting of the history of cinema between the “action-image” (character-motivated action, defined by Classical Hollywood) and the “time-image” (contemplative cinema defined by filmmakers like Ozu and Antonioni). His work then becomes something of a grand synthesis of Bazinian realism, Brechtian discourse, Bergsonian philosophy, all written in a way that has captured passions of many scholars (and frustrated countless others).

At the premiere, Andersen attempted to downplay the influence of Deleuze on the work, commenting, “It’s not a lecture,” but the project evolved out of a yearly seminar he has taught on the film philosopher. The Thoughts That Once We Had (a title coming from the Christina Rossetti poem read in Kiss Me Deadly) isn’t a linear tour through Deleuze; Andersen called the quoted passages a “structuring device” for the director’s own history through the movies. It recalls Godard’s Histoire(s) du cinéma, but without the collage effect of the former work. Boldly, Andersen has forgone voiceover, a crucial element to his past films — the clips and textual quotes from Deleuze must speak for themselves.

The film begins with Deleuze’s “affection-image” and the faces of silent cinema — Griffith, Von Stroheim, Von Sternberg — which he weaves to those in Godard, Cassavetes, and Costa. Andersen then considers World War II through documentary images of the Siege of Leningrad and bombings in Vietnam (using footage from Joris Ivens’s 17th Parallel), before then highlighting the absence of these images in Alain Resnais’s Hiroshima Mon Amour. One of Andersen’s more successful bits is to remove the voice of the characters’ refrains (“You saw nothing in Hiroshima. Nothing”), instead using them as intertitles in communication with the images, the blank spaces acting as placeholders for the absent footage of the bomb.

If one of Los Angeles Plays Itself’s merits was its rigorous argumentative structure, The Thoughts That Once We Had prides itself on being a meandering look through the 20th century through film. There are clever connections — a scene of Jeanne Moreau walking through Paris streets in the 1960s is sewn to the opening of Hou Hsiao-Hsien’s Millennium Mambo, while Chaplin’s protest gag in Modern Times is juxtaposed with the wrongful conviction in Errol Morris’ The Thin Blue Line. These relationships are key to the Deleuze project, where cinema repeats certain gestures again and again, but in Andersen’s conception of them, they felt more like surface play.

More successful was a sequence demonstrating Deleuze’s concept of firstness, secondness, and thirdness through three comedies. Andersen quotes Deleuze’s strange schema: firstness is pure being (Harry Langdon’s turtle-paced comedy, emphasizing his blissful expression), secondness as the forces between objects (Laurel and Hardy’s gag wars, in which each action necessarily leads to the next), and thirdness as something as only existing in relation between firstness and secondness (the many double entendres, physical gags and mistaken identities of the Marx Brothers). Andersen then jumps to the violent murder at the end of Masahiro Shinoda’s Pale Flower (in place of Deleuze’s choice of Hitchcock) to show how the film’s murder works as an expression of all three states. However, my discussion with audience members unfamiliar with Deleuze after the screening indicated they found this sequence particularly hard to follow.

If the film isn’t a history lesson, what is it? It certainly showcases some of Andersen’s favorite films and filmmakers (he claimed his working title was Great Moments from the Cinema): American film noir, various Godard films, a tribute to the “underrated” (according to Andersen) Marlon Brando, and Fritz Lang (the audience particularly ate up Debra Pagent’s erotic dance to a snake from his rather underknown two-part “Indian Epic,” The Tiger of Eschnapur and The Indian Tomb). The film ends with quotes from Deleuze’s hope to restore a “belief in the world” through cinema, using the “As Tears Go By” sequence from Made In U.S.A. But what does Andersen want his audiences to experience? During the Q&A, Andersen appeared anxious about the response, admitting, “I don’t understand the movie myself.”

The Q&A was a bizarre affair, poorly led by REDCAT’s Steve Anker and Berenice Reynaud, who continually questioned him about a version of the film he had shown two months before to a private audience at CalArts. Andersen’s responses felt less mysterious than simply evasive. He chided an audience member for using the phrase “can you talk about” in a question, and then mostly responded to other questions by naming the films various clips came from. Most of all he acted non-committal — when asked about one of the film’s declarative statements about the nature of cinema, Andersen retreated, muttering, “It’s just a thought that occurred to me.” Anker and Reynaud acted surprised at the lack of questions, while a majority of the audience hustled their way out after having not seen a sequel to Los Angeles Plays Itself.

The Thoughts That Once We Had is a smaller, more personal project than anything Andersen has attempted, even down to the amateur style of the essay (there’s nothing about the production separating it from today’s YouTube supercut, which perhaps simply speaks to the access of technology today). But even with the personal bits Andersen includes — notably an anecdote about his first movie love, the soundtrack to To Have And Have Not — I came out feeling I knew less about him, as well as his relationship to cinema and Deleuze. If Los Angeles Plays Itself became such a defining work for the authority of voice evident throughout, it is harder to place Andersen in The Thought That Once We Had. It’s perhaps fitting that a man whose public persona remains elusive has matched it with a film that does the same.