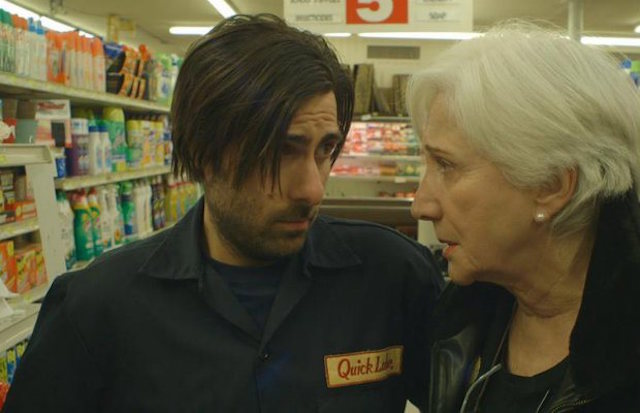 7 Chinese Brothers, Bob Byington’s latest, takes its title cue from an REM song, so the familial rapports on display might not be exactly what you suspect. Jason Schwartzman stars as Larry, a boozed-up, bedraggled sad sack, who punctuates his big gulp binges with extended visits to his grandmother (Olympia Dukakis) and her supervisor (Tunde Adebimpe) in a nearby nursing home. Things start to look up when he takes a gig at the local Quick-Lube, where he develops an instant crush on his boss, Lupe (Eleanore Pienta), even if her interests plainly lie elsewhere. Filmmaker spoke to Byington about his satirical treatment of a blue collar demographic, using women as a proxy for stability, and external solutions to internal issues. 7 Chinese Brothers world premieres in the Narrative Spotlight section at SXSW this Sunday.

Filmmaker: Your films tend to be much more concept driven, rather than the result of a telegraphed plot. Do you typically write from the characters on out, or do you have ideas you want to address? What’s your entry point for the script?

Bob Byington: This is a 14-year-old script. I saw a movie called Hearts of Atlantis and went home and said, I can do better, and wrote the script over the course of the next six days. The script went through a rewrite as part of the Fox Searchlight development program. We were going to make it in 2004 but it fell through.

Filmmaker: Both 7 Chinese Brothers and Somebody Up There Likes Me take a satirical stance on ‘blue collar’ jobs, but the workplaces are not set pieces as they are in so many other movies — they are clear determinants in the characters’ lives. Why did you choose to set the films at an auto shop and restaurant, respectively, and what appeals to you about portraying a technically lower class demographic at a humorous face value?

Byington: I guess there’s a connection, but the steakhouse waiters make way more than Larry! I really see no connection between their jobs and his. And the auto shop locale came more out of an unconscious area than anything else. I have never had much money and have had bad jobs, and most of the time I was sort of fantasizing about not being at the bad jobs while I was there. I’ve been told the crew on my movies does the same thing.

Filmmaker: Jason Schwartzman really carries the movie, he’s in every scene, and takes center stage to such a degree that we’ve perhaps not seen from your other films. Did you write the role specifically for him, and can you speak about the casting process?

Byington: Jason read the script and came on board, and it’s easy to attract cast once you have someone like him committed. Tunde, I’d been talking with for years about it, and I’m relieved it worked out for him to do it. Eleanore I saw in a movie called See You Next Tuesday, she was great in it and in this.

Filmmaker: A recurring trope in your films is the man who looks to a woman for some semblance stability. Here, Larry tries to find it with Lupe, but really receives structure and comfort from his visits to his Grandma, though he might just be better off he quit drinking. Is there a reason your protagonists look to external solutions rather than internal ones?

Byington: Not that I know of, that’s an interesting observation. I have certainly looked for alcohol to solve my problems, despite being relatively certain that it, like suicide, is a short term solution to a long term issue.

Filmmaker: The airy, (natural?) lighting of the film gives it almost a filmic, romantic look that works in welcome contrast to its protagonist and story. How did you decide on the aesthetics of the film with your d.p. Adam Ginsberg?

Byington: Adam is a better person to ask. I chose the camera and I gravitated toward two of the prime lenses we were using, and we tested the lighting at all the main locations, so we had a pretty good idea what the movie would look like, and I’m glad that it looks like that.