Why the Art of Observing Life is Enough 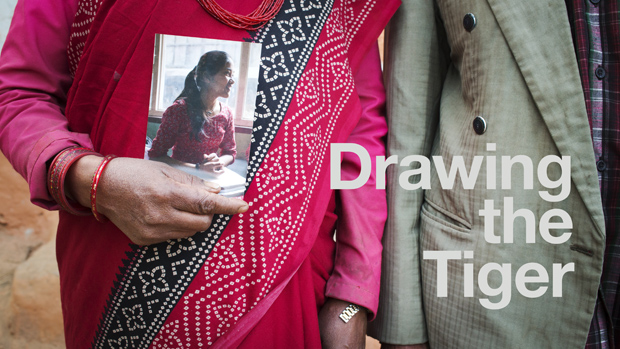 The following guest essay by filmmaker Amy Benson, about how sad, unexpected developments changed the course of her documentary, Drawing the Tiger, coincides with a Kickstarter campaign to raise funds for the film’s completion. Please visit its Kickstarter page to learn more and consider donating. — Editor

My husband, Scott Squire, and I started filming what is now Drawing the Tiger seven years ago. It began as a ‘social justice’ documentary; we imagined the tagline would be, “The best thing we can do in the world is educate the girls.” We knew the story we were going to tell… you know it too.

We had a beautiful, charismatic subject who was on an epic trajectory, fixing to become the very avatar of globalization’s upside. She would graduate and go to university and medical school and return to her village to let the women know how not to have so many babies. She would break the generational cycle of poverty!

We truly believed we had a film that would empower women in developing countries by creating a tidal wave of people in the West giving funds for tuition, books and uniforms. 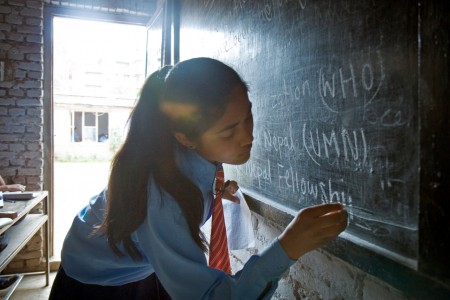 Then, our protagonist, Shanta, a 15-year-old girl from a tiny subsistence farming village in the Nepali hills, took her own life between school and chores one day. Her education did not make her and her family’s life better. It made it worse.

We were devastated personally and set adrift professionally. We no longer had the requisite happy ending to our film. Documentaries live and die by unexpected outcomes, but this tragic “plot twist” not only wrecked us emotionally — it undercut our film’s “fundability” very dramatically.

We had to continue the film; it is our job as documentarians to tell the whole story. We couldn’t let this one go. Once we came to terms with Shanta’s death, our project gained depth.

Our film’s old message: Donate money to this very real problem and you can be part of the solution.

It’s much less a slam dunk, and more truthful, more nuanced, for having to contend with the death of the main character and interpret Shanta’s family’s soul-deep confusion over opportunity and loss.

There is no overt call to action. Must there be?

Coming up with solid answers for the inevitable “Audience Engagement and Outreach” questions on grant applications is tougher now. Our documentary is not going to shut down SeaWorld.

It’s not just us. Not just you. Early this year, at the Cinema Eye Honors, I had the good fortune to meet Albert Maysles. He held my hand sweetly and told me how everyone loves his work, but no one wants to pay him! His films are not “sellers.”

And yet, his movies are documentary touchstones. They are admired as art and an essential part of university film courses. Grey Gardens and Salesman have no call to action, no reach-for-the-wallet moment. The filmmakers were not trying to “save” Big and Little Edie, nor trying to end the hardships for bible salesmen.

Grey Gardens, in the 1975 trailer, is described by the narrator as “One of the oddest, most beautiful stories ever created: A love story!”

I admire films like this, films that have no angle. Films that are an observation. An observation of humans being human. To me this is enough. It is fascinating.

I know we are not alone.

October Country by Michael Palmeri and Donal Mosher — a film that has perhaps had more influence on me than any other in terms of craft (and if you have not seen it yet, you should) — is the observation of Donal Mosher’s family in upstate New York. It is about the family cycles we cannot escape; it even suggests we might carry these cycles from our dead ancestors. It is about family and dysfunction and how it relates to the American Dream.

It is so rich, in a Grey Gardens kind of way. A beautifully crafted lyrical exploration of characters I relate to, feel compassion for — admire. I have this family I have never met in my psyche now. I think about them. I never think about saving them; just having this window into their lives has changed me in some unquantifiable and meaningful way.

This is why I love documentary.

While editing Drawing the Tiger with our intuitively, spiritually storied editor, Fiona Otway, I often thought of my downstairs neighbor and dear friend, Susanna Bluhm, who is an extraordinary painter. While we moved pixels around on a timeline, Susanna, a floor below, mixed colors for her canvas and created strokes.

Fiona was doing similar work with the palette of our hard drives full of footage from Nepal. I think of our film as a big painting. One of those ones that you look at for a long time. I hope anyway.

So, after seven years we are almost done with this piece of art that was completely impractical in time and money to make.

This is the reason the gods gave us Kickstarter. We are currently in the middle of our second campaign, this time for finishing funds.

And, ironically, Kickstarter is where we are discovering that our unfundable, down-the-rabbit-hole documentary just might be a powerful tool used to ignite critical conversations about the complexities of western development. Our backers are eager to talk about the film, and they haven’t even seen it yet. Complexity gets folks talking.

As documentary filmmakers, we have a lot of ground to cover: Humanity. It’s real big. This art is worth it.

“Up there [on the screen] is where you practice what it is to be human. What a wonderful thing that is.”
—Albert Maysles, in Marina Goldovskaya’s film The Art of Observing Life (2013).