“To Remove What Feels Electronic in the Image”: While We’re Young DP Sam Levy 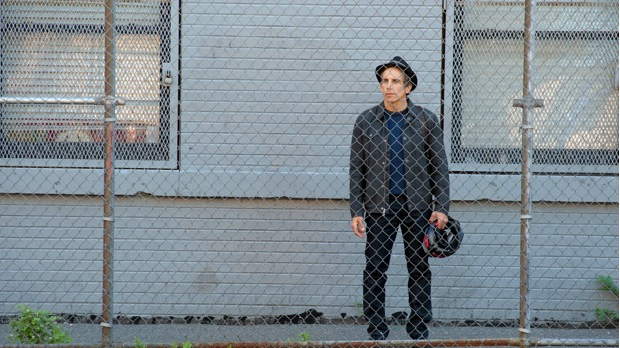 While We're Young (Courtesy of A24)

by Matt Mulcahey
in Cinematographers, Interviews
on Mar 27, 2015

Early in writer/director Noah Baumbach’s latest effort While We’re Young, the film presents a montage of its 40-something protagonists (Ben Stiller and Naomi Watts) transfixed by the glowing screens of their digital devices, juxtaposed against a younger couple they’ve recently befriended (Adam Driver and Amanda Seyfried) basking in the analog glory of board games, vinyl and VHS. To be a contemporary cinematographer is to embrace both worlds of this montage: the analog and the digital, the new and old, the 6K camera and the perfect imperfections of the vintage lens.

While We’re Young cinematographer Sam Levy talked to Filmmaker about that balance, his continued collaboration with Baumbach and the bittersweet experience of being part of the final film print made at Technicolor New York.

Filmmaker: While We’re Young marks the third film you’ve shot for Noah Baumbach in three years, following Frances Ha and Mistress America. Both of those films were made on a much smaller scale  — Frances Ha was even shot on a Canon 5D. Did those stripped-down productions affect the way you approached the larger-scale While We’re Young?

Levy: The idea was to use the same approach, but with a larger group of really gifted people concentrating on what’s in the frame and anticipating what will be in the frame tomorrow and next week. So, for example, now we had an amazing production designer, Adam Stockhausen, and an amazing costume designer, Ann Roth — all of these really gifted, hardworking filmmakers and their support teams. So now there’s this amazing layering to the visual language that occurs that is just different from when it’s a small group of people, but the foundation is exactly the same. There would be times where we’d be looking at certain scenes in While We’re Young and Noah and I would say, “Well, we wouldn’t have added another light if we were doing Mistress America or Frances, so let’s not do it here.”  Even though the physical production was different — more crew and more equipment — it still came out of a place of, “Let’s only have what we need and not anything extraneous.”

Filmmaker: Noah has described Frances Ha as owing a debt to the French New Wave and Mistress America as an homage to screwball comedies. What are the cinematic forbearers of While We’re Young?

Levy: Frances comes somewhat out of Agnes Varda and Francois Truffaut and While We’re Young comes out of some of Gordon Willis’ color films from the ’70s like Annie Hall or a movie like [the Conrad Hall-photographed] Fat City. Photographically, you could liken Frances Ha to an old silvery black-and-white print and While We’re Young to a Bruce Davidson chrome photograph from the ’70s. That’s how I like to look at it. They’re both shot digitally, but inspired by the look of the photochemical process. There do exist 35mm prints of both (Frances Ha and While We’re Young), which I helped supervise and create. Actually, the last 35mm film print that Technicolor New York ever made on its last day of existence was a print of While We’re Young.

Filmmaker: In attempting to achieve a ’70s-inspired look for While We’re Young, did you use 1970s-era lenses?

Levy: I used Zeiss Super Speed Primes, which depending on the set were largely manufactured between the late ’70s and the late ’80s. The set I used was manufactured in the early ’80s, but I didn’t choose them to get an older look. I chose them because they’re extremely fast — they’re a T1.3 — and they’re also not very expensive to use, which on any production is always helpful. One marked thing about them which I love is they have an extremely sharp falloff in the way that an image that’s in focus rolls off to out-of-focus. When you compare it to some newer lenses, which have a softer roll-off, the effect that it has is that on a 50mm lens at like a T2.8. If you’re holding two people in a medium to wide frame they appear very pronounced — they really stand out from the background and not in the same sort of way as when the focus is extremely shallow and the background is very soft. It’s just a different look where the subject feels very present in the frame. Those lenses can be tricky and they can be a little unfriendly to faces if you aren’t careful and if the light is a little too hard, but I just really love what they do.

Filmmaker: After using a DSLR for Frances Ha, you moved up to the ALEXA Plus for While We’re Young. What led you to that choice?

Levy: We shot with the ALEXA Plus using 2K ProRes rather than ArriRAW. I’ve done quite a bit of testing and I actually prefer the lower resolution format of ProRes because to me it’s a little bit softer. When you enlarge up to theatrical projection, using ProRes softens it just a little bit when used in tandem with these Zeiss lenses that I like and some other techniques in the digital intermediate. All of these things are techniques to keep the image from looking too electronic. Even with a camera as great as the ALEXA, which has this very mellow look, it’s still an important part of my process to remove — in an organic, in-camera way — what feels electronic in the image.

Filmmaker: Though it was a film shot with a very small footprint, Frances Ha had a surprising 50-day shooting schedule. What is your process with Noah like in terms of what you chose to shoot?

Levy: Noah gives me the script. Once I’ve had a chance to read it a few times, we get together and we go through the entire script and make a first pass at a shot list even though we don’t know any of the locations yet. We do it in his office and I bring a graph paper notebook and we’ll start to draw blocking that’s completely theoretical. It’s a lot of fun to map something out when you have no idea what your location is going to be. I’ll read the script to Noah and he’ll walk around his office and put the blocking into motion right there. So that’s the first pass — a completed shot list, beginning to end, every single scene. Then once we get into actual official prep, we go through and do a second pass and by the time we do our second pass we usually have about half of the locations. By the time we get to the tech scout with the entire crew, we have a very precise shot list.

We try to do as many scenes in one shot as we possibly can. In While We’re Young, there’s a short scene before Cornelia (Watts) and Darby (Seyfried) go to a hip hop class where they’re walking and Cornelia is explaining how she tried to have kids. They’re walking toward the camera for a good 50 yards and they cross the street and we dolly with them as they turn the corner and then we do an iris rack and it’s probably about three pages of dialogue. We decided well before we found that location that this scene would be a great candidate for a oner. A decision like that comes from “What scene are we coming from and what scene are we going to?” We were going to this hip hop class, which turns into a montage, so it made sense to just be watching and listening during the walk-and-talk.

Filmmaker: There are similarities between the four lead characters – all are artists in their own way and both Stiller and Driver’s characters are documentary filmmakers. Yet the worlds they inhabit are drastically different. How did you convey those differences visually?

Levy: The younger couple lives in this airy loft that’s full of daylight and the older couple lives in this more subdued, compact environment with two-toned tungsten and daylight. Josh and Cornelia (Stiller and Watts) live in kind of a railroad apartment, so we used the windows at either end and then in the middle there’s a kitchen where we used a tungsten practical light to give a mix of gold and silvery blue. At Jamie and Darby’s place (Driver and Seyfried), they’ve got this cool loft with enormous bay windows so we just used an HMI to push daylight through those windows.

Filmmaker: The worlds of the younger and older couple collide at a Chinese restaurant when they share a meal early in the movie. As Stiller and Watts become energized by their new friends, the camera itself becomes energized, circling around them.

Levy: We shot that scene at this great old Chinese restaurant on 6th Avenue in New York called Charlie Mom. It was a very deliberate choice to put them at a circular table and to put dance floor down and let the camera rove around as they try to impress each other.

Filmmaker: Another sequence I enjoyed is the film’s “Analog vs. Digital” montage in which the older couple plays with their digital trinkets while the younger couple plays Risk and watches The Howling on VHS.

Levy: We referred to that as the “technology montage” when we were working on it. I really love that montage too. Noah writes such brilliant dialogue and it’s very precise, but it’s great fun in that sequence when there is no dialogue, just (purely) visual storytelling. The information needs to be clear, but we’re able to push the image a little bit more than you could if you were shooting two people talking to each other. For example you see Adam Driver picking a VHS tape of The Howling, which he then watches. That particular shot is really dim and I really love how it looks. If that had been a proper scene where he was talking to somebody, we would’ve had to light it differently.

Filmmaker: The film’s climax features a confrontation between Stiller and Driver’s characters inside Lincoln Center. That climax opens with a slow, Altman-esque zoom as Stiller enters the room. It’s a shot very much in keeping with the ’70s vibe you spoke about earlier.

Levy: The movie makes a big tonal shift at that point – Stiller wants to confront Driver and it almost becomes like a conspiracy movie during that scene, something like The Parallax View or All the Presidents Men. So when (Stiller) enters, that zoom is your transition into that tonal shift.