Shakespeare in the Park: On the Set of Matías Piñeiro’s Hermia & Helena 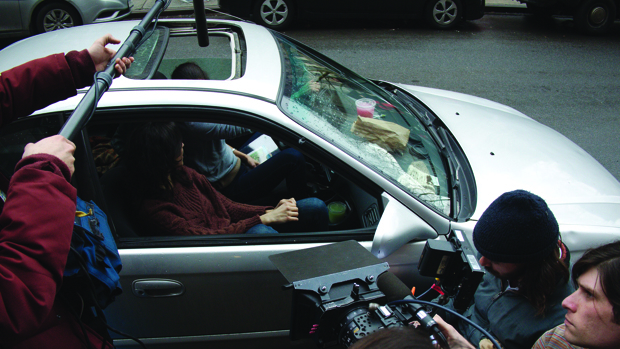 Matias Piñeiro, first from right, on the set of Hermia & Helena (Photo by Graham Swindoll)

Argentinian director Matías Piñeiro’s last three films have started from a Shakespearean source text: As You Like It for Rosalinda, Twelfth Night for Viola, Love’s Labour’s Lost in The Princess of France. In all these structurally playful and formally rigorous works, troupes of actors are working on new productions, and the films are given further continuity by a recurring ensemble cast and crew including actress Augustina Muñoz and d.p. Fernando Lockett. In Piñeiro’s newest production, Hermia & Helena, a young woman (Muñoz) comes to New York on a fellowship for a new Spanish translation of A Midsummer Night’s Dream, though her interest in meeting up with a former lover she hasn’t seen in years (and meeting a father she’s never known) serve as equally compelling motives.

The production began last September in New York City, with the fragmented shooting schedule (to capture passing seasons) continuing in Buenos Aires in December before returning to New York in spring. This partial relocation is a logical transition for Piñeiro, now a New York resident for the foreseeable future. His producer is Graham Swindoll, who met Piñeiro in his capacity as an employee of Cinema Guild, which distributed Viola and The Princess of France. A first-time producer, Swindoll doesn’t seem excessively frazzled on day 13 of the near-final batch of shooting, He’s taken two weeks off to shepherd this shoot home (Melanie Schapiro was the on-set producer for the Argentinian portion of the project), and — after days of 16- to 18-hour shoots upstate in Hudson — this is nothing.

When it came to raising Hermia & Helena’s small budget, it helped that all of Piñeiro’s productions to date are in the black, with Princess hitting profitability by the time of its Locarno premiere, thanks to a combination of finishing grants and presales. “Even if the films aren’t funding everybody’s lives completely, they pay for themselves and allow you to pay for the next film,” Swindoll explains. “We’ve talked a lot about the production style of Rohmer and Hong Sang-soo — very small crews, low budgets, productions that don’t require you to go a lot of places or get special effects or set pieces or costumes. If you can work within those constraints, you can have a lot of aesthetic freedom in what you do.”

Today’s shoot is on the periphery of Columbus Park, a tiny space in the part of Manhattan where Chinatown transitions into the City Hall area. A lot of the production has shot around here, as well as in Piñeiro’s Alphabet City apartment and purposefully anonymous parts of Brooklyn. The plan is to execute one of Piñeiro’s characteristic long shots, his preferred mode for scene construction, rather than conventional editing and coverage. This one is a three-page conversation between Muñoz and Mati Diop, to be shot in a friend’s gray Honda.

When the car pulls up, Piñeiro opens up the trunk and finds a beanie. “We can use this,” he says, and puts it on the dashboard. The actresses disappear and return with bright pink and green Slushees. “Too much?” Muñoz asks. Piñeiro likes the gaudily colored beverages and adds them to the dashboard mise-en-scene. (They’re left untasted until the shoot is over and quickly deemed vile.) While Lockett sets up his camera, the actresses get in the front seat. Piñeiro sits on the railing, script in hand, while talking through the scene. When the door is closed, he sits on a case outside the door, not more than a foot away from Muñoz.

The camera is a Sony F3 with Zeiss Ultra Prime lenses, used previously on Viola and The Princess of France — affordable, not too large and available for rent in both New York and Argentina. The scene requires tiny but carefully timed rack focuses and pans within the confined space of the front seat. Piñeiro cues each movement with a nod while keeping his eyes trained on the actresses; whenever Muñoz turns her head, she’s looking right into the eyes of her director, who’s just out of the frame. The relationship between Piñeiro and his cameraman is symbiotic, Swindoll says: “They both know the kinds of shots the other one likes,” which helps work move swiftly. After five takes, there’s a keeper. The soundman cues up his track, and Pineiro listens and watches, rocking back and forth while tapping on the headphones. With the take’s success confirmed, a few more are done minus camera for wild track.

The entire shooting schedule for the day has been met in just over two hours. “We’re going fast,” Piñeiro says. “I thought it would be much harder.” With unexpected time left, the decision is made to steal a shot of Muñoz exiting from the subway. Discussion ensues between Piñeiro and Swindoll about which subway station she could emerge from while being consistent with the earlier scenes, and they settle on the Delancey-Essex station on the Lower East Side. Splitting into cab and walking groups, Muñoz and the crew reconvene outside the station.

The challenge is to find someplace Muñoz can dispose of a paperback of Lady Chatterley’s Lover that’s integral to the plot and, fortuitously, there’s a large plant clay pot right outside the station entrance. Working swiftly, Lockett finds the right angle to capture Muñoz’s ascent from the subway stairwell and then rapidly pan down to the plant. Chinatown was relatively deserted and disturbances few, but the LES is in the lively throes of evening rush hour. Still, there are no distractions or rude bystanders — it probably helps that the tiny production looks more like a student film than something worthy of gawking at — and this potentially tough shot is swiftly dispatched. “What else can we do?” Piñeiro wonders, and quickly sets up one more shot of Muñoz crossing the street.

The feeling of remarkably unfrantic production and quick control obtained is fairly remarkable: without storyboards (albeit with a lot of work with the actors beforehand), Piñeiro has executed some fairly minute camera movements in record time. With only a few more scenes left to shoot (there may be a day or two in Montana, pending financing), Helena is on track to begin postproduction, with an early 2016 festival launch the goal.