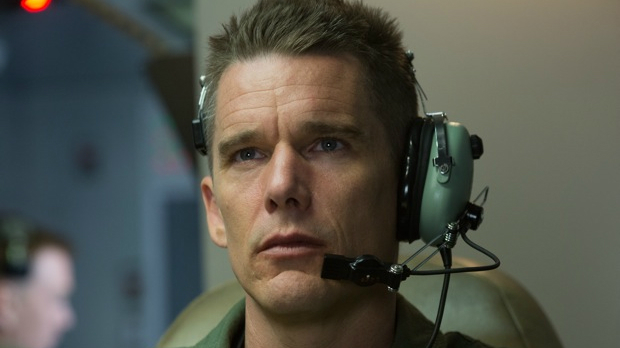 The soldiers can barely agree to disagree. They are primarily ex-pilots but a few video gamers have recently thrown into this mix that operates drone strikes from the safety of temporary metal trailers on a military base outside the rhinestone city of Las Vegas. The year is 2010; the U.S. drone program is at a new high. Some of these armchair warriors have increasingly strong feelings against the manner in which drones are deployed in places like Afghanistan, Yemen, and Waziristan; others feel that anything goes to keep America safe following the events of 9/11; and a couple are practical and ambitious enough to borrow from each point of view.

The one thing about which they unanimously concur is the horror of the plight of one female servant in an Afghan home whose routine beating and rape by a rogue Taliban soldier they observe on large monitors through the sharp lens of a drone camera. (“He’s a bad guy,” the most jingoistic member of the group says. “He’s just not our bad guy.”) It’s a no-brainer. She is a noncombatant, and the repugnance would be universal. (Note that the nastiest individuated person in the film is not an American soldier but an Afghan.) 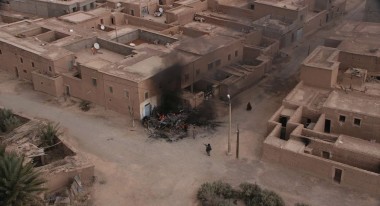 Judgment does not require a position on the issue of drones and the different ways they are deployed. The scenarios, repeated several times, become in Good Kill significant as points of action. Will anyone step in? Would that same person get involved if the victim were a child or other non-combatant knowingly assassinated as built-in proportional collateral damage of a strike intended for a designated target? No, the disgust of the sight of a vulnerable mother losing all sense of dignity at the hands of a nasty countryman far outweighs the stink of the larger picture, a CIA-driven policy of signature strikes (blasting crowds) and follow-ups (blowing up first responders).

The question becomes: Would an intervention on the woman’s behalf become salvation for those who carry out the assigned actions? (The parallel between violations of an unprotected woman and an undeveloped country is hardly subtle.) If one of the group believes that it does, is the risk of punishment or demotion worth soothing a troubled conscience? The dilemma is at the heart of Andrew Niccol’s potent film, and might just offer Major Thomas Egan (Ethan Hawke) a path to redemption. In his mind: The politics and arbitrary decisions of the administration that are delivered through the (unnamed) CIA are far too complex to equate a sin one might be able to do something about with daily irrevocable strikes in which military efficiency is primary, ethical considerations checked at the entrance to a drone. (The only job variation is occasional monitoring of a spot so that boots on the ground might sneak in a few hours of shuteye.)

Tom, a simple, strangely awkward guy (out of the blue, he asks Colonel Jack Johns, terrifically played by Bruce Greenwood as a war-weary model of machismo falling outside the loop, “Why do we wear flight suits?”), who refuses to curse and appears to harbor a hidden religious worldview, has served a couple tours of duty as a fighter pilot in Iraq in Afghanistan. He has always seen himself as a pilot. Life is not the same jerking a joystick and deciding on the exact moment of impact of a drone strike from 7000 miles away. “I miss the fear,” he tells bored wife Molly (January Jones), in front of the red-stoned home that is a clone of every other residence on a suburban block heavily populated by military families.

The task is boring for former pilots. In one ridiculous fantasy flashback, Tom flies his jet, his mask covering his face, while his plane does 360 degree turns in under an open sky. Yet that is how he romanticizes the profession he has lost, permanently on account of infractions — such as after he deliberately loses the computer link before a determined strike that he takes exception to.

In the Niccol-Hawke collaboration Gattaca (1997), the principal desire of Hawke’s valid perfect Vincent/Jerome is to be shot up from ground into space. In Good Kill, the goal is merely to return to the altitude cruised by his beloved fighter plane. But in the interim between years of production, more drones than jets are being constructed. Tom is already dated, but Vincent/Jerome just may stand the test of time. 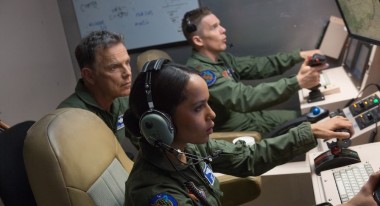 Tom is honest with Molly: He used to be fun, life was more fun when they were not together every day, when they had to condense the joy of togetherness during his R&Rs. Leaving an office rife with tedious tension for a home plagued by arguments is not his idea of freedom. Even now, the only time we hear pounding, liberating rock music is when Tom drives alone in his ’67 Firebird around Vegas — sometimes with no destination in mind. This is as unrestricted as he is going to be. (The National’s resonant “Afraid of Everyone” is fitting accompaniment for the final credits.)

Like the noxious, seemingly unresolvable situation with the violated Afghan woman, problems on the domestic front are lightweight compared to the larger issues the film explores (in informed detail). Yes, day and night Tom faces a type of desert sturm. Yes, he drinks too much, has a terrible temper, and lies in bed looking miserable, but these troubles begin to feel tacked on whenever we move back into the arena of policy and its execution. Do we care enough about Molly and her lifestyle? (January Jones is physical near-perfection in a vanilla American sort of way, but she lacks oomph. Hawke at least exudes charisma.)

Tom is necessarily secretive about his job, until circumstances dictate that he elaborate. At the same time, he recounts a repressed episode from his pilot days when he exceeded what was necessary and obliterated an entire clan in calculated stages. Overall, do he and Molly share anything anymore? She accuses him of not talking and showing little interest in going out with her just to share an activity. He doesn’t want to have sex with her. His only libidinal interest is colleague Vera Suarez (Zoe Kravitz, appropriately subdued), only slightly less for her phenomenal beauty than for her outspoken stand against some of the more egregious CIA policies. Suarez dares ask their faceless contact at Langley, “Isn’t that a war crime?” She tells the others in the trailer that they are now doing exactly what terrorists do, and in the process breeding a new generation of radicals. How long can she last?

The danger of a film with two claustrophobic settings — the trailer and the house itself — is redundancy. Niccol masterfully varies his shot types and editing patterns to maintain dynamism in a film with a fair amount of verbosity. 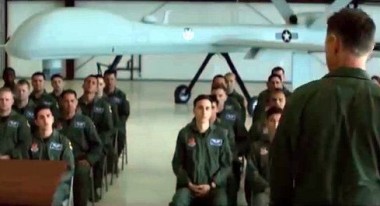 Often he uses film negative, the way it actually appears on monitors through night goggles. He contrasts the manufactured green lawns of Las Vegas with the parched brown desert in the Middle and Near East. (“Out of necessity, this war has become borderless,” the faceless CIA liaison tells the pack after drones have entered sovereign Yemen. On the monitors, Morocco subs for all of the places they strike.) Cuts to explosions occur at the beginning, middle, or end of a sequence. (Guitar chords might be relatively loud or exceedingly soft, mournful.) They titrate the degree of dramatic force. Aerial shots predominate, especially in the target zones — a drone’s-eye view — but also in Las Vegas itself. Its glitz offers a striking counterpoint to the emptiness in the poverty- and war-stricken areas where our soldiers aim.

The deck is stacked: The rich win, no matter what other factors come into play. Hawke’s lined face is manna: With a furrowed brow or an intense stare, he can change the mood of a scene. Except for a couple of base offices, the only space interrupting Tom’s monotonous life is the liquor store where he stops — too often — to buy a bottle, be admired for his stripes by the teen salesboy, and hit the slot machine during a rapid exit.

Unfortunately, the climax of Good Kill is not its end. It’s very clear at what point the film should conclude, but someone at the studio decided that, as logical as that would be, some people might not get that last-minute uplift. It makes no sense, especially coming when it does. But I long ago learned to ignore the last bit of many films, which end up suffering narratively offensive additions or substitutions. Up to that point, however, this is an engaging, well executed movie that is food for thought and — thanks to Niccol, DP Amir Mokri, and editor Zach Staenberg — itself worthy of a medal of valor.