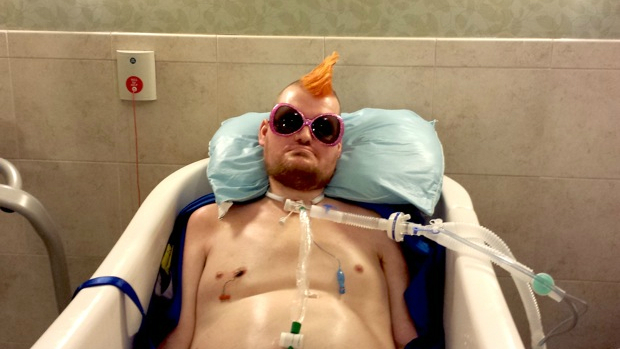 Waiting to see TransFatty Lives at the Tribeca Film Festival, I was in line behind a woman who didn’t know what she was waiting to see. The couple in front of her were filling her in, telling her all about the filmmaker/subject of the film, Patrick O’Brien (once known as DJ TransFatty), his “journey” with ALS (Amyotrophic Lateral Sclerosis) and how the terrible disease had affected their own lives. It wasn’t a downbeat conversation in the slightest. They had discovered O’Brien through his online videos, posted over the course of ten years, documenting his worsening condition not with depression and pity but with raw humor and a gusto for life. These videos were an inspiration to them. Much of that footage had made it into the final film, they informed the woman. Despite becoming completely paralyzed, Patrick directed the film to completion, communicating through a computer that tracks his eye movements. “Oh wow, that’s amazing,” the woman said. She sounded genuinely excited. But when those folks turned around, the woman spoke low to her husband: “I didn’t know the movie was about this.” She sounded worried, unprepared for the emotional ride that was sure to come. “I thought it was about food.” Maybe she misread the second word in the title as a noun. “Well, it kind of is, right?” asked her husband.

No, it’s not. But it’s also not a “disease film.” It’s simply a movie about what happens to a guy and how he deals with it — it’s just that what happens to him is possibly the most harrowing thing that can happen to someone. And the guy just happens to be funny, fearless, willing to document everything, and (perhaps most importantly) a brilliant filmmaker. The result is a masterpiece of first person cinema. But still, I can understand this woman’s apprehension. I had some too.

I went to film school with Patrick O’Brien. My first impressions of him? Dismissive, flippant and kind of arrogant. That’s before I saw his work. When I watched his film, a short called Born Again Porn Star, my view of him changed entirely. The way I remember it, the film was shown last in a long night of end-of-the-year work midway through school. My film had played and received an enthusiastic response just minutes before. I was still high from it. I wanted to leave with that high. It didn’t happen: Patrick’s film was simply in another stratosphere from the rest of our work, both content-wise and cinematically. I felt like a fourth grader after hearing a classmate’s poem. “His daddy must’ve helped him!” I wanted to yell. Yes, he had help. Everyone has help when they make a film. But the the author was unquestionably Patrick. The bar was raised so high that it wasn’t even a matter of trying to reach it. Jealousy would have been preposterous. Instead, I felt a true appreciation for this seemingly fully-formed artist. Most of us didn’t know what we were yet. At best, we managed to somehow pass something off as acceptable juvenilia. This was different. Patrick wasn’t arrogant, I realized. He was driven. He was confident in his choices, in his odd tastes, in his art, and he had an unquenchable urge to express that.

The last memory I have of Patrick from this time was following our thesis awards ceremony. Instead of a short film, he had a trailer for a feature he was hoping to make. It was playing on a loop in the lobby of the theater. I remember him pulling the cinematographer Ellen Kuras over to the screen to watch it — literally pulling her by the arm. I watched her as she viewed the trailer. My eyes moved to Patrick. He was watching her too. The look on his face wasn’t “Please like me,” it was “I can’t be denied, right?” It would be nearly 20 years before I learned to what extent that was true.

When I heard Patrick had ALS, I looked him up and saw a video he posted. Maybe it was one of the videos that had inspired that couple. I couldn’t finish watching it. He was still in the early stages of the disease but It was just too hard to see this guy — who I’d always known as an artistic juggernaut, a constant creator — cut down so horrifically in the prime of his life. I felt a little angry that he was filming himself so intimately while struggling with the disease. In a way, he was forcing me to deal with it, and I didn’t want to. Messing with the audience had always been a component of Patrick’s work. He pushed boundaries of decency and acceptability. I felt like this went too far. I felt this way because, deep down, I counted him out. After seeing TransFatty Lives, I’m ashamed of that feeling now.

Ten years of seemingly constant documentation of his continually worsening condition is what makes up the material of TransFatty Lives, but thanks to Patrick’s personality and his overall approach to the disease, the film never has a weight that’s too much to bear. In less skillful documentaries with illness at the center, filmmakers capitalize on the emotional stranglehold they’ve placed on the audience. They keep you there in that position and pound you with sentiment until you’re a weepy, slobbery mess. Tragedy, and sometimes true triumph, are build into these stories. O’Brien doesn’t let these baked-in elements drive the train. He has a totally unsentimental approach to the disease that has gripped him for a decade. The cornerstone of O’Brien’s approach is expressed by him in the film: “What if it’s a BEAUTIFUL disease?” On paper, this is ludicrous and kind of morbid. In the film, the question keeps reverberating and, magically, it isn’t ludicrous at all. The beauty lies not in the disease itself, but in the purity of life that demands to be lived as a result of the disease.

The road to the film’s completion was long and (surprise surprise) difficult. O’Brien, despite paralysis, steered the post-production through various versions with the help of numerous loyal contributors. These valiant collaborators culminated with filmmaker Doug Pray (Scratch, Levitated Mass), who was shown an early version of the film just to get fresh eyes on it. “I watched it and I was like ‘Oh my god, there’s some really powerful stuff in this film,’” says Pray. He gave O’Brien three pages of notes. Then O’Brien asked the question the busy filmmaker was hoping he wouldn’t ask: “So, can you do it?” Doug Pray showed the film to Lassi Jarvi, who edited a few of Pray’s earlier films. He had a similar reaction to the material. Doug remembers, “It was one of those things where it was like, ‘Wow, should we do this? Should we just help this guy with a movie?’”

So began what Doug Pray calls “one of the most remarkable collaborations I’ve ever experienced in my life.” The first thing Pray and Jarvi did was pull apart everything and write it all up on index cards, screenwriting style. They took pictures of those cards, recorded their ideas, and sent them to O’Brien at the Leonard Florence Center for Living in Massachusetts. He listened to those recordings, looked at the pictures and then wrote back emails to California. “Once we felt like we were all on the same page, there was a sense of trust,” says Pray. “There was some moment when we realized there’s no turning back. There’s no way you can say to someone like Patrick, ‘Oh, I’m too busy.’ It just doesn’t work that way. It’s such a powerful project.” They sent sequences to Patrick and he sent his feedback in emails — some 600-800 messages, according to Pray. “Many of them were one word. ‘Hey Patrick, did you check out the new intro? What do you think?’ ‘Dope’. Or he would say something like ‘Not feeling it.’ He could be tough. It was hard. It was hard for him, too. Imagine being paralyzed and sitting in a bed in Boston, and there’s two guys in California who you haven’t even met, ever, and they have your baby that you’ve been working on for ten years, and they’re working day-in and day-out on it and sending you edits.”

O’Brien finally had the team he needed to hone the material in such a way as to be palpable to an audience, yet still keep that “in your face” style that’s a hallmark of his films. “If the work would prove itself then we knew everything would be okay, “ says Pray. “If he saw an edit that Lasse did and he was like ‘Holy shit, I love it,’ we were like ‘Oh, thank God.’ And for every two of those there might be one we had to work on more.”

The sheer volume of footage accumulated over the years allowed the story to be told in fascinating detail. Even people who want their stories documented have moments way too private or rough to consider recording. Patrick is the opposite. The more raw, the more rough, the better. A moving example of this approach is a moment perhaps three years into the disease. He is struggling to breathe and his sister is recording him, at his insistence, while they await the paramedics. “Film yourself,” Patrick orders, in a voice drastically slowed down by the effects of the disease. When she does, we see the fear on her face. “How do you feel?” he asks her. “Stressed out,” she answers with intense worry. “I don’t want a trach [tracheotomy] yet,” he says numerous times to her and to the paramedics who show up. Soon we realize that what is being documented is the last time Patrick will be breathing on his own. It was more than a powerful scene. For me as a filmmaker, it was a revelation. To witness his driving need to express himself, to trust his art at the possible moment of his death, was overwhelming. And to experience this at the triumphant Tribeca premiere, with Patrick in attendance, was extremely moving. His trust paid off.

I sat behind the woman and her husband who were ahead of me in the line. I was curious how they’d react to the film. They sat there motionless, like the rest of us, just like Patrick up there in the forth row. In the dark movie theater the effects of the disease are of no consequence. We’re all unmoving. Just our eyes and ears are needed. The journey happens within us. But then it ends. And the lights come on.

I asked Patrick O’Brien that question in an email. Here’s his reply.

“Everything is material. Everything has potential. Storm the studio! Raid the Radio Shack! In terms of my next film, I’d like to do something quick and dirty. I need to pleasure myself. TransFatty Lives took a lot out of me. Dark times in my head that we had to go back to. The editors of the film, Doug Pray, Lasse Jarvi kept dragging the past out of me, like getting cath’d. (Catheterized)

Peter Rinaldi is a filmmaker and writer in New York City. Twitter: @peter_rinaldi