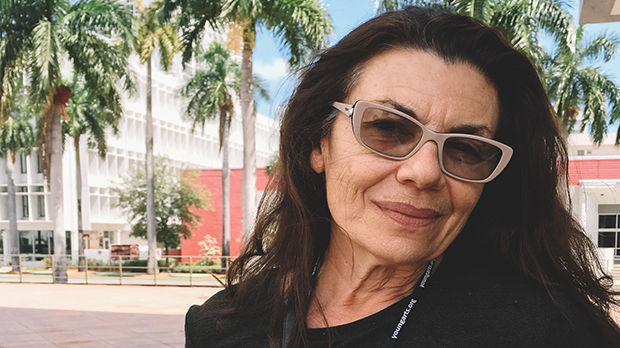 Maggie Steber, Photography, She Does Podcast

Maggie Steber is a prolific documentary photographer who has worked in 65 countries around the world focusing on humanitarian, cultural, and social stories. For over three decades, Maggie has worked in Haiti, an experience that has impacted her emotionally and personally and led to her book “Dancing on Fire.” She has received the Leica Medal of Excellence, and recognition from World Press Photo Foundation, the Overseas Press Club, Pictures of the Year, and the Medal of Honor for Distinguished Service to Journalism from the University of Missouri. Her work has been featured in National Geographic Magazine, The New York Times Magazine, Smithsonian Magazine, AARP, The Guardian, and Geo Magazine among others, and is featured in the Library of Congress and in private collections. In 2013, Maggie was named as one of eleven Women of Vision by National Geographic Magazine, publishing a book and touring in an exhibition in five American cities. Maggie talks here — in a conversation excerpted from this week’s She Does Podcast — about her love for history, a near-death experience covering conflict and her opposition to making poverty porn.

Just Say No to Poverty Porn
This happens a lot in Africa and Haiti, where people come and there’s something kind of sexy and easy about poverty to photograph. It’s not that you shouldn’t photograph that, because that’s the reality of people’s lives, but I became aware after just working in Haiti intensely for about six months, that I was not showing Haiti. I was showing a portion of Haiti. There was this very vibrant daily life, extraordinary culture and exquisite beauty. I realized that I wasn’t giving Haiti a fair shake, and I became very aware of that. Our images are powerful things and so if all you ever see about a country, or a beleaguered people, is this tragedy then you think that’s all they are. It’s amazing how people will let you into their lives if you really are interested. If you’re just there for a picture, forget it. In fact, please don’t go if that’s all you’re trying to do in a country, is document people who are suffering, just because you’re trying to build a portfolio. Please don’t go. If you really are sincerely interested and beyond ‘getting a great picture,’ people will tell you everything about themselves, and it enriches your own life.

Learn From The Locals
Whenever you go into a new country or a new place to work, do all the research you can do. Look at the literature, look at the art, read the history, and then go in like a baby, like you know nothing and let those people teach you. Even if you’re someone who only takes pictures as a tourist, go and sit down and talk to people before you shoot them with a long lens. Really take advantage that you’re in a different culture and go talk to that little lady selling candy on the corner. Because she has a story. And maybe she’ll invite you home if you’re lucky, and give you a meal and you’ll meet her family and your life will change.

Educating The Next Generation
I really love to teach. I tried a stint at full time university teaching and I loved it for the first two years and the third year I was so ready to leave. I think of myself as this wild horse running across the plain, and once and a while I like to come into the corral and help the farmer plough his field. I love workshops, they’re like intense, short love affairs. And a lot can happen in the week. I mentor a lot of young people all over the world. People will email me and if I have time I’ll look at their work and comment. People I don’t even know. Because nobody ever did that for me and I’m determined to be somebody who is generous in this business because it’s much harder now.