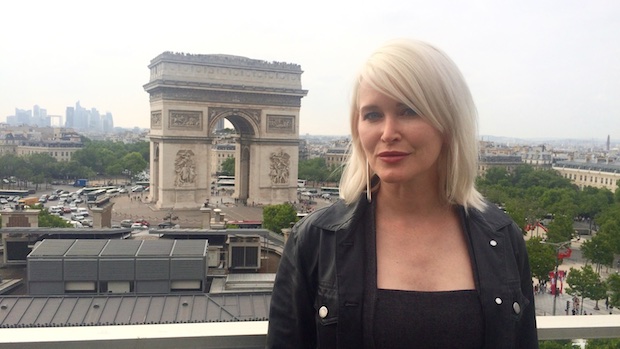 Recently released by WellGo USA, The Road Within is the directorial debut of screenwriter and actress Gren Wells (A Little Bit of Heaven). Starring Robert Sheehan, Dev Patel and Zoe Kravitz, the film tells the story of three escapees from a psych ward (Tourette Syndrome, OCD and anorexia sufferers, respectively) on a transformative road trip. It won the Audience Award at the Champs-Élysées and is currently available in the States on digital platforms.

Filmmaker: How do you think your next film will be different than your first?

Wells: I think you start to define who you are with the second film. You start to have a track record. With The Road Within, as well prepared as I was, I was learning the whole time. I asked a bunch of filmmakers what they wish they knew before their first features and they all said, “everything.” Now that I’ve been through it, the mystery is no longer there. So on the next film, I will be even more prepared. I want to stick with my strengths.

Filmmaker: What are your strengths?

Wells: Creating a happy set, not showing weaknesses in terms of feeling tired, being the dogged leader, and most of all, working with actors. I love the shit out of actors. All my best friends are actors. I want to do another acting piece about people.

Filmmaker: What’s your relationship with the actors on set?

Wells: For me, it’s important — and I told all the actors this — that if they’re upset, to yell at me afterwards, not on set. We pay actors to wear their emotions on their sleeves, so we can’t get mad at them when they exhibit those emotions. But, there is a time and a place. And on a set with hundreds of people, let’s get the work done, and then, get upset later.

Filmmaker: Rather than standard auditions, you had informal meetings with actors. What were you looking for?

Wells: I looked at it like music. When there are too many notes, you don’t hear the music; it just sounds like noise. So I had to make sure the actors weren’t stepping on each other’s notes. When I met Robbie [Sheehan], there was a spastic energy, but something very soulful about him. He could rest. And when I met with Dev [Patel], I knew he had the right kind of frantic energy for the character. And Zoë [Kravitz’s] energy was on the opposite end of the spectrum.

Filmmaker: And how did you all work together during the shoot?

Wells: Because we had rehearsed so much, the shoot felt almost like a play. There wasn’t much experimenting on set. There were moments of specific guidance, but we worked through all the major problems beforehand. If anything, it was just fighting daylight to get through the days. Our crew was awesome, but tiny. We had only one camera, lots of stopping, re-lighting, turning around. It all takes so much time.

Filmmaker: Are you looking forward to working on bigger budget movies or do you like the bare-bones filmmaking?

Wells: There’s nothing romantic about a low-budget movie. Granted, the crew got their days for pension and health, but people would have made more on unemployment. The more money you have, the more toys you get. I’d love a crane someday! It’s not that I’d go over-budget if the story didn’t deserve it. You should always work within the confines of the story and who the actors are.

Filmmaker: You mean the scope of a movie can depend on the level of stardom in the cast?

Wells: Whether people like to admit it or not, actors are worth a certain amount in the marketplace, just in terms of pre-sales. On this movie, before we shot day one, we were already in profits because of foreign sales. You can’t guarantee that people are going to make money, but you can guarantee they won’t lose money. And that’s just smart movie making.

Filmmaker: What else have you found to be smart movie making?

Wells: If your budget is five million but someone says I’ll give you three, you make the movie for three million dollars. You need to accommodate — cut some days, rework the script, whatever it takes. If things are tight, look for pages to cut. On this movie, we shot the script I wrote, but cut about 15 minutes. Next time around, I’ll continue to ask myself what I absolutely need and what I could potentially lose.

Filmmaker: Why did you decide to direct your own script?

Wells: I came to L.A. to direct, but when you write a script, you can either sell it to a studio or you can keep it to yourself and it may or may not get made. It’s tough to make a movie and no one tries to make a shitty movie, but a lot changes from script to screen. I’ve realized that if I want to keep my vision the same, I have to write and direct. Well, not necessarily write, but definitely direct. Directing is where it all transpires. The script is vital, but the tone is in the directing.

Filmmaker: Why did you move from New York to L.A.?

Wells: It was the blizzard of ’97. It was so bad! Also, I’m tough but not abrasive, and being in New York is a tough environment. It hardened me, or at least my exterior, so it was hard for me, as an artist, to access my emotions or feel truly myself. I do get road rage in L.A. though.

Filmmaker: Your husband, filmmaker Brent Emery, produced the film. How was working with him?

Wells: You have a short-hand with the person you live with. One of the first days of shooting, I caught myself waving off something he said. I immediately realized the dismissal, and asked him to repeat the note so that I could actually listen, and then decide whether or not I wanted to take the note. I married him because he’s brilliant with incredible ideas, so when we are working together, it’s important to actually listen to those ideas. I found that it worked really well when we treated each other on set with more formality. Ultimately, he was the reason the film got made and I wanted to honor that. Not to mention, it was so nice to know I had someone always in my corner, on any given day.

Filmmaker: You’ve described Tourette Syndrome as an orphan disorder because not enough people suffer from it to get major funding. You’ve also talked about how it’s generally misunderstood as a disorder. How have audiences received the film?

Wells: We knew it was playing well with young people because we had enough money for one test screening in Pasadena and they went crazy for it. We premiered at the Los Angeles Film Festival and that audience also loved it. And then we premiered internationally in Rome and the entire jury was 13-17 year-olds, and they completely got the film, awarding us with Best Film in the youth section. But then we screened in Napa and I was so nervous because I didn’t know how it would play for an older audience. But they also embraced it to the point where a little old lady came up hugged me after a screening, saying this film was going to change people’s lives. But I was most nervous when we went to South Korea because we had sold the territory and the distributor would be there. The censorship there is pretty severe so I had no idea how the audiences would respond. But they all laughed and clapped and cried so I was hugely relieved.