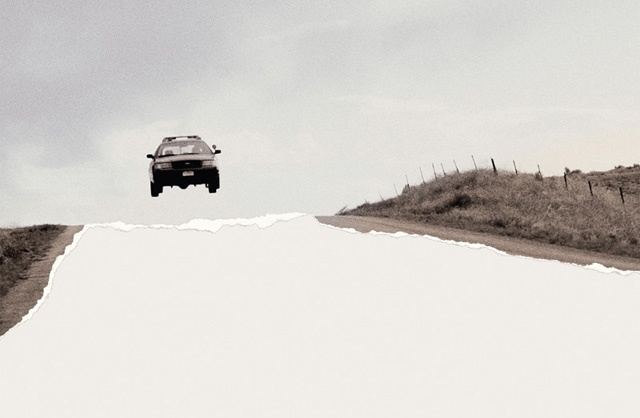 by Howard Feinstein
in Filmmaking
on Aug 7, 2015

One day non-discerning encyclopedists will politely dismiss the new top-of-the-line Cop Car. It is Jon Watts’s second low-budget feature (after the spooky 2014 Clown) made prior to his surprise anointment as director of the upcoming Spider-Man “reboot” (Spider-Man: The New Avenger?), which once again visits Peter Parker during his high school years.

That angle is off and condescending. It makes perfect sense that Watts was plucked from indie obscurity to run the show for a pull-out-the-stops studio production loaded with stars, not newbies and B-list actors/executive producers; spectacular CGI and highest-tech editing instead of jerry-rigged FX and less sophisticated montage; and a union-scale crew, rather than a circle of longtime movie pals.

Watts has the gift of balance. He imaginatively fuses the innocent world of awkward minors and the tarnished sphere of transgressive adults. (In Clown, the adolescent son of the damaged protagonist displays symptoms of budding psychopathology.) His movies explore the psyche of the pre-adult male. Each film is cynical. Both are laced with black humor. 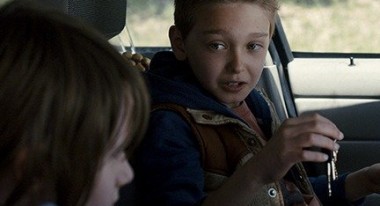 These bar mitzvah movies document initiation, the bursting of the cocoon that protects kids from the temptations and moral compromises of adulthood. Rapid-fire thinking demanded of a grown-up replaces the leisurely slacking off of youth. It’s like a snake shedding its singular defining skin to reveal the new coat of many colors that preps it for entrance into a more complex environment where choice is an option. When a crisis looms, they can decide to keep joshin’ around or, adult-like, rise to the occasion. Can they pass a demanding rite of passage?

The two sheltered 10-year-old buddies in Cop Car — wiry, energetic Travis (James Freedson-Jackson, star quality written all over) and doughy, sluggish Harrison (Hays Wellford) — reduce the universe’s moral selection simply to good guys and bad guys. Over the course of a day and an evening, we witness the gradual but shocking expansion of their worldview. These small-town-Colorado prairie boys who just might be well-raised Mormons come face to face with the specter of maturity. Time for casual daydreaming is reduced. There are fewer glib commentaries on the paths they traverse.

Make no mistake: Travis and Harrison are no angels, probably never have been. The boys are proto-adults, makin’ the best of a bad situation. They are not all that different from the real bad guys they are forced to take on. When they cross the line and take an extended joy-ride in a seemingly abandoned police vehicle, they are only looking to alleviate chronic boredom. They are not considering resale or blackmail; rather, they think they are playing a game nearly as innocuous as any in their PE curriculum. It’s all about turf, competition, and just plain ol’ lettin’ loose. Unfortunately, things just don’t go according to plan.

Cop Car impressively feeds off a sizable chunk of the generic spectrum. Watts is a highly focused multitasker: He cleverly tweaks each genre all the way through the film. Thanks largely to the handiwork of editors Megan Brooks and Andrew Hasse, the interwoven moods and styles come off as credible, and as seamless or self-consciously prominent as the filmmaker desires. 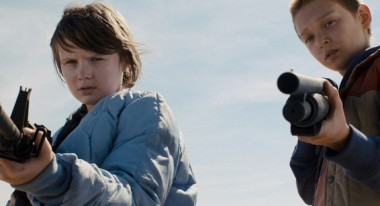 It should be apparent from the title alone, but, next to coming of age, the salient genre is the road movie. Make that the mini-road movie. Just after the film opens, the vast, arid, and empty space on screen is pierced by the two boys walking through, poking branches into prairie-dog holes, tossing rocks, and crawling through the occasional barbed-wire fence. They are absent-mindedly passing time in the boonies that both define and confine them. Mountains far in the background ease some of the austere sameness.

Watts has said that Gus van Sant’s languorous Gerry (2002) is one of his favorite films. In both Gerry and Cop Car, potential harm challenges young men in huge, isolated outdoor spaces, even if Gerry’s more extended long takes and narrative stasis take it much further outside the mainstream than Cop Car. There’s a dissertation topic: “Gerry, Jon Watts, and Spider-Man.”

Travis and Harrison’s idea of letting go, of anarchy at 10, is to take turns shouting out cuss words, although, having been programmed according to a subjective code of conduct, they self-censor where the f-word is concerned. Like most afternoons, ennui begins to fester. Their luck changes when they stumble upon the vehicle. Sizing up the situation, the boys hesitate, then each runs to touch it before quickly returning to his partner’s side. They muster up the courage to go back, open the unlocked doors, and climb inside. Voila! They discover the keys.

They make the leap. “This is our cop car now!” Harrison shrieks. Neither has ever driven, but how much risk can there be experimenting in such a tremendous patch of almost unpopulated land? So they do. At least Harrison does. His is not continuous linear driving: It is film travel. A to B, cut; B to C, cut; C to D, cut, with no destination in mind and no significant markers along the way. (Who cares, really, when it’s widescreen in color?)

Instead, the sensation of movement is rooted in the withheld energy inside an ellipsis. There is some differentiation — a beautiful flight through the air, higher and higher velocity, increased weaving back and forth across a paved country road — but the former scheme foregrounds the power of pure motion. That is, until they get stuck in a muddy rut, then crash through a gate. Throughout the ride–and the entire film, in fact — composer Phil Mossman provides an ominous low hum or plucky guitar strumming. The latter accelerates when the action deems it appropriate.

The drama heightens when Watts cuts to a police pick-up truck, which Sheriff Kretzer (an anachronistically mustachioed Kevin Bacon) is driving to the spot where he had left his now missing auto. Another genre holds forth: the thriller. The baffled, sweaty lawman pulls a tortured, bloody corpse with its hands tied together out from the back of the truck and pitches it into a large, secret cemented hole in the ground.

Intercut with the two kids driving for fun, this subplot has a very high grisly quotient. Something is off: The cop car does not serve its public purpose, the sheriff is corrupt as hell, and the boys have gotten themselves in big trouble. Rifles come into play. Watts does not provide much of a backstory, although we glean some of it from a few inserted scenes — such as the Sheriff going home to flush thick bags of coke down the toilet (when he is not maniacally snorting it).

Watts leavens the ugly signs of violence. The attention on free-spirited youth undercuts it for certain. The manipulative Kretzer, speaking in ambiguous copspeak, contacts Travis and Harrison by police radio. He offers them safety, then loses his temper and scares them to death. The boys don’t fully grasp the back-and-forth hustle. They are more at ease with the agenda-less language of the Hardy Boys.

Comedy softens the painful blows. Cop Car falls into the genre of farce. The Sheriff does a southwestern variation of John Cleese’s Silly Walk from Monty Python, overdoing the gestures and facial expressions (the steely stares, horrifying). The boys discover in the trunk another of the sheriff’s prey, a bound, injured whacko (a terrific Shea Whigham), who also happens to be a master manipulator, and untie him in an act of mercy (“I think he’s a good guy.” “Yeah, let him out.”) He turns on them. (His creepy description of the harm he will inflict on the boys, their mothers, and their pets should they double-cross him is priceless.) Searching in vain for a place to hide in a wasteland from the advancing Kretzer, he bounces back and forth across the road clad in a ridiculous bathrobe. His tics are as broad as the sheriff’s.

This is Method acting, silent-movie subset. The amusing performance overkill well serves Freedson-Jackson and Wellford’s naturalistic interpretations. Except when responding to unexpected joy or impending danger, the boys play things down. The young thesps make Watts look good, capable of handling tough stuff on set and off. Don’t doubt him.