Elisabeth Moss in Queen of Earth

In his compact, unnerving new chamber film Queen of Earth, Alex Ross Perry packs a potent, inventively off-key punch with his combo of a brilliant pre-credit emotional breakdown scene and the baroque calligraphy of the main title and the credits themselves upon its completion.

He holds the face of the anguished Catherine (Elisabeth Moss) in tight close-up in the former, her hair mussed, tears and mascara forming rivulets that slowly cascade down her cheeks. Her interior pain is palpable. Off-camera, longtime boyfriend James (Kentucker Audley) tells her it’s all over, justifying his infidelity and assailing her “suffocating overreliance.” Some of her sassy retorts are so loud and high-pitched that they make it nearly impossible to watch without changing volume control. The single variation in the set-up follows. She looks almost directly into the camera, as if it were James and us, and screams, “Go!” as the atonal sound of bells and xylophone swells on the soundtrack.

At that moment, her beaten-down, almost otherworldly countenance forms the backdrop for that ornate, feminine script, written in the style of Hollywood melodramas from the ‘50s to the ‘70s. Perry uses Teddy Blanks’s Versaillesque font for the remainder of the credits, pre- and post-, as well as for the labels marking each day of Catherine’s week-long vacation, visiting and catching up with old friend Ginny (Katherine Waterston) at her absent parents’ Hudson Valley faux-rustic lake house. 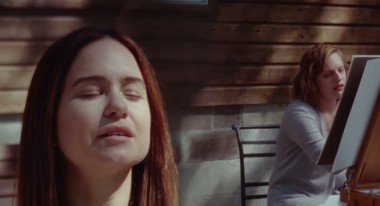 The gestalt, however, announces something more ominous: a revenge-filled psychological thriller about the descent into madness of an unanchored, hysterical woman, a popular genre in the ‘70s. We witness right off an end and a beginning. Catherine has just lost to suicide the artist father (with whom it is implied she had a traumatic relationship) she was extremely attached to, and whose business affairs she managed. He validated her, as a person and as an aspiring sketch artist. His loss precipitates her derailment; James’s departure hastens it.

A young woman who defines herself through the men in her life, she is a model of codependence. She tells Ginny, “The only two people that really cared about me abandoned me.” She sees herself as both victim and center of the universe. “Not everything’s about you,” Ginny snidely responds. Catherine’s very first line in the film, however, after James has dumped her, is a self-centered, “How could you do this to me?”

The previous summer, Catherine and James had visited Ginny as a loving couple. Already the long relationship between the women had become infused with jealousy, and they made no bones about it. They had grown past the phase of loving youthful friendships. The presence of other men is the catalyst for much of the discord. “What would happen if you broke up?” Ginny tactlessly asks Catherine and James over breakfast. The rift culminates upon Catherine’s departure, after she apologizes for not spending more time with her host. Ginny’s acerbic response foreshadows the nerve-wracking events of the following year: “Maybe someday I won’t be there for you when you’re going through this shit, and we’ll be even.”

The film moves back and forth between past and present. While Catherine tries to recuperate from her double loss, Ginny revives a short fling from the year before with tart-tongued neighbor Rich (Patrick Fugit). She has become merely cold to Catherine, whereas Rich, who seems at times a mouthpiece for the cruel things his flame cannot verbalize, is constantly in her face.

Having taken more inappropriate comments than she can bear, Catherine confronts Rich over dinner with a litany of his faults, calling him not only on his personal shortcomings (“you are weak and selfish”) but also blaming him for the problems of the whole world (“you are why depression exists”) and the underlying reasons for her father’s taking his own life. Moss’s delivery is flawless. Catherine has by then so advanced toward psychosis that just a few minutes later, upstairs, she meekly asks him, “Why don’t you like me?” He has a thick skin. “You are a rich, spoiled brat,” he answers. “You will never be your father. I’m convinced that if you weren’t related to him, he wouldn’t have gotten close to you.” She grabs him in a manner that subtly shifts from come-on to chokehold. I’d call that ambivalence.

Watching Catherine head toward the edge does little to encourage Ginny to bridge the gap between them. Either as a way of healing their rift or just being vindictive, Catherine works from time to time on a sketch of Ginny — which is only revealed at the end of the movie. No spoiler here. In the sequence, a lovely one at that, which recalls their former tightness, they sit side by side, one after the other discussing similar love affairs from the past. Undermining a bit from the bonding is the fact that Perry’s fine DP, Sean Price Williams, fixes his camera more on the listener’s than the speaker’s face, as if to say that there is no one truth operating here.

Ultimately, Catherine slides into a fantasyland in which reality and mental constructions become inseparable. She assumes that Ginny has poisoned a salad that she brings to her up in her balcony room, where she spends much of her time in bed. She is so irritated at the sound of Ginny chomping on potato chips that her mind magnifies it and turns it into a war chant. Ginny discovers that Catherine’s multiple phone calls, full of laughter and chit-chat, have no one on the other end. The low point of the insanity takes place at a party Ginny gives, in which Catherine, having fallen to the floor, hallucinates the guests as monsters grabbing at her Repulsion-style.

Here though, as in several other scenes, Perry pulls out of psycho mode and cuts to shots from Catherine’s point-of-view of these strangers again as their normal selves, though visibly taken off guard by her behavior. She now inhabits that uncomfortable zone straddling real and fantasized realms, unable to land fully in either state. The aberration that provides a through-line is Catherine’s certainty that her facial bones are grinding under her skin. She is appalled at Rich’s suggestion that it just might be psychosomatic.

The reference to Polanski’s Repulsion is one of many cinematic nods — maybe quotes is a more apt term, especially because Perry stops short of carrying them to their logical conclusions — just as Perry’s Listen Up Philip contains numerous literary homages. Fassbinder is one of the director’s heroes. He borrows from Martha. He compares the claustrophobia in The Bitter Tears of Petra von Kant, originally a stage play and set in one room, to the suffocation in Queen of Earth. But he opens up the latter. The women and the guys go out to the lake and sit outdoors, and they interact within an architectural landscape that Perry breaks apart with camera angles and shot types. We see stills of a window frame or part of a stove, and only a couple of shots of uninterrupted interior space. The strategy keeps the narrative from becoming monotonous, but it also echoes the increasing fragmentation of Catherine’s brittle mind. 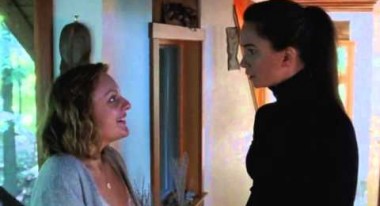 One major difference between The Bitter Tears of Petra von Kant and Queen of Earth is the question of class. The dominant Petra is a verbose, self-made bourgeois fashion designer, while her submissive-slave assistant is a mute working-class woman who is far from her equal (although the power dynamic changes). Both Catherine and Ginny are from well-to-do families, with expensive educations on their resumes. In many ways Perry has more of a European sensibility than most of his domestic peers, but as far as politics and ideology go, he is as American as they come.

He mentions in interviews Woody Allen’s Interiors as an inspiration, especially because that serious downer was completely unexpected from a comic. This translates into: Listen Up Philip was funny; this isn’t, and I hope it provokes you. Comparisons with earlier films about female bonding and disentanglement are obvious, among them Bergman’s Persona and Altman’s Three Women and Images.

The shoot itself makes for an interesting story. Based on advice from friend and producer Joe Swanberg (Moss shares the credit), Perry went small: a single location, chronological order, a quick shoot (14 days), and cast and crew staying together on set. Ace composer Keegan DeWitt worked from dailies immediately after they were shot to expedite the production, so he was more involved in the creation of mood than most musicians can be. Light piano and a droning sound are particularly effective in maintaining the eerie ambience.

Editor Robert Greene had his work cut out for him, interweaving the two time frames. Occasionally the past is an exceedingly short insert in a present-day sequence; at other times the two temporalities are on an equal plane, taxing us a little (we get help from Moss’s haircut during her joyful period) but successfully visualizing the effect of the past on the present without relying on exposition alone.

Moss steals the film. How can one face be capable of so many forms of expression and contortion that ease so smoothly into one another? She creates a character who in an hour and a half of screen time passes from civilized sanity to certifiable craziness. She has said that had they filmed in the conventional way, according to set-ups already in place, she could never have made the transition. However she does it, the performance seals her ever-growing reputation as one of the finest actors working today in film and — I haven’t forgotten you, Mad Men addicts — on TV.