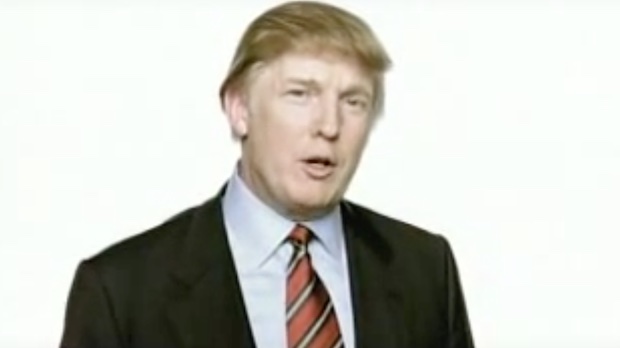 by Scott Macaulay
in Filmmaker Videos
on Sep 7, 2015

In this interview clip from a shelved Errol Morris project, businessman and now presidential candidate Donald Trump muses on the meanings of Orson Welles’ classic film, Citizen Kane. Trump doesn’t diverge from critical orthodoxy about the film, but it’s still interesting to hear him take away the standard lesson that money isn’t everything. Still, as Jason Kottke notes, Trump can’t just help himself from throwing in conversation-ending misogynistic aside.

The Movie Movie, an aborted project, is based on the idea of taking Donald Trump, Mikhail Gorbachev and others and putting them in the movies they most admire. Isn’t it possible that in an alternative universe Donald Trump actually starred in Citizen Kane?

Here is the beginning of the screenplay.

A vast, labrynthine warehouse filled with floor to ceiling shelving as far as the eye can see. An aging ARCHIVIST (in his early nineties) is standing on a tall library ladder, reaching up to a high shelf, twenty, maybe even thirty feet up.

The shelves are filled with rusting film cans. (Could they be filled with silver-nitrate prints ready to burst into flames?) The archivist shifts one can on top of another, making his way into the middle of a pile.

His rheumy eyes searching. He blows dust off a label. And then the Eureka moment. He’s found something.

With the can in hand he makes his way slowly through the vault. He puts the reel on an aging Movieola and on the screen a scene from Citizen Kane flickers into view. It is one of the lost scenes from Citizen Kane, one of the scenes that has Donald Trump in it…

THE DONALD, a man in his early fifties with a spectacular hair-do, is reading a newspaper at breakfast…