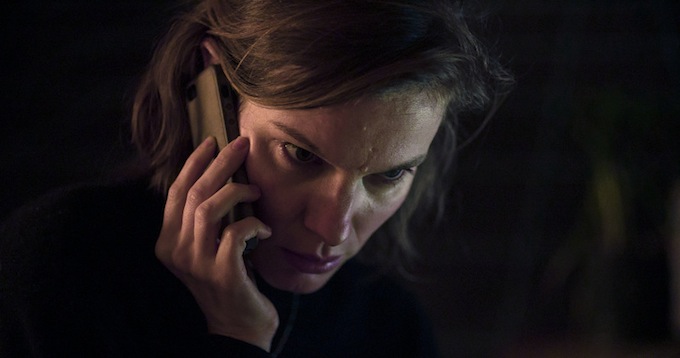 by Sarah Salovaara
in Festivals & Events, Filmmaking
on Sep 15, 2015

A world premiere in the Vanguard section at TIFF, Harrison Atkins’ Lace Crater traffics at the intersection of supernatural horror and that lo-fi millennial genre proliferated by its producer, Joe Swanberg. During a weekend trip to the Hamptons with friends, Ruth (Lindsay Burdge) has an unexpected dalliance with a burlap wrapped ghost, resulting in a strange STI that no doctor can diagnose. Ahead of Lace Crater‘s TIFF premiere tonight, Filmmaker spoke to Atkins about his interest in sci-fi tinged love stories, and his collaboration with Swanberg.

Filmmaker: The geography of the house in the Hamptons is central to establishing the dynamics between your characters. Did you write for the place, or scout it?

Atkins: That location actually belongs to the artist parents of a good friend of mine. When he took me to visit the house on a weekend trip, I was struck by how beautiful and cinematic it looked.  And when, months later, I started to write the script for Lace Crater, the film was always set there. I’m not sure what we would have done if we weren’t able to shoot there.  It felt integral that the film unfold in that exact place!

Filmmaker: How did you come to collaborate with Joe Swanberg, on Lace Crater, and his producer Alicia Van Couvering, on your short work?

Atkins: Well, I went to college at Northwestern University in Chicago, and saw Joe around a lot. I got to know him a little bit better when I needed to cast a baby in my senior thesis film. My professor recommended I reach out to Joe, since his son Jude had been born pretty recently. So I did, and Jude was perfect, and Joe was so cool and down, and I guess we just stayed friends. My first job out of college was on his film, Drinking Buddies. And that’s where I met Alicia Van Couvering and Andrea Roa, who were producing that film. I moved to New York soon after the shoot and kind of fell in with Alicia and Andrea, sort of interning or something, but mostly just hanging around their small production company in Greenpoint. At one point I wrote this weird little script and sent it to Alicia, thinking maybe she’d give me notes or something.  But instead she was like, “This is great, I want to help you make this.” And that became Chocolate Heart.

Joe came onboard Lace Crater relatively early in the process of developing that film. I had seen him around at film festivals and we had kept in touch. But I was describing the film over the phone to him one day, kind of trying to figure out how to get the project together, and he was like, “Maybe I can help you get this going.” Very soon after, his company Forager stepped in — and then we were really moving. I think we shot the movie like six weeks later.

Filmmaker: Your short Chocolate Heart portrays genitals as arms and a talking toilet who quantifies a sexual experience as being on the receiving end of a shit. In Lace Crater, Ruth has sex with a ghost. What appeals to you about exploring these “alternative” renditions of consummation?

Atkins: I’m really interested in human intimacy, or more generally, I guess I like to explore the way people get close to one another. Humans are so complicated, and manifesting real intimacy with another person can be so deeply intense and confusing; I’ve always found something about that emotional territory very cinematic. I think a lot of my films explore or recontextualize the terrain of asymptotic intimacies. And surrealism has always seemed like a useful tool for unpacking or reframing the experience of loving and being loved.

To me, Chocolate Heart is all about deconstructing sex — revealing it as an absurd, alien performance. And I think Lace Crater is operating on a similar wavelength, but uses more of a horror-film formal language to weaponize the uncanny psychological territory of a new sexual intimacy.

Filmmaker: Your other short Blissful Banquet deals with some supernatural elements and a character who constructs paramors out of wood. Would you say that Lace Crater bears some sci-fi influences, and how difficult is it to realize those effects when working in a lower budget range?

Atkins: I like science fiction a lot, because I’m interested in films that present completely alternate realities and logics. To that extent, I think Lace Crater does kind of engage with the formal traditions of sci-fi, though I’ve never really thought of it as a science fiction film. Special effects always present an interesting challenge, especially because we try to keep things practical. That means some meticulous pre-planning is required! My friend Ben Gojer executed the make-up design and practical special effects on Lace Crater, and we had a bunch of marathon phone conversations over the course of pre-production wherein we cognized everything together and talked through the way the effects gags could work.  Nonetheless, it’s always a bit of an experimental process. And it’s been said before, but I think budget constraints do force you to be a bit more creative in solving these kinds of puzzles and challenges.

Filmmaker: You’ve edited all of your own films to date. How much of post informs your writing process and vice versa as you approach each subsequent project?

Atkins: I love to edit because I’m interested in the formal language that tells stories as much as I’m interested in the stories themselves. So throughout pre-production and shooting, I’m always completely engaged in the way things will cut, and how scenes will be constructed in the edit. I’ve found that it actually helps the process move a lot faster, both on set and in the edit room. But it also allows for a greater degree of control and precision, which is useful for capturing really specific rhythmic and tonal stuff. While writing, I do tend to build edit gags into the script, or write notes to self about the way things will cut. But to me editing can also be a very experimental part of the process, and I try not to plan so much that I become disengaged from the chaos.