If only life stopped placing hurdles in their path, two heavily overqualified pals who study grad-school-level science in LA might complete an intensive private project so dear to them that they have shoved everything and everyone else aside. In Listening, longtime BFFs David (Thomas Stroppel) and Ryan (a superb Artie Ahr) are on the brink of completing a computerized electronic device that pushes debate on human behavior far beyond nature/nurture. Their invention skips directly to what could be called neuroture, the control of thought and action by unmediated stimulation of unguarded neurons in the brain.

Free will occupies the space between neuron function and action. Tampering with it brings determinism to the table. Telepathy is the first step in mind control, which makes our thoughts transparent. The results of distorting the natural scheme can be positive, such as cures for a variety of illnesses, or frighteningly negative. In the hands of misguided manipulators, we could become weapons. “I was only following orders” becomes normative. No excuses, no extenuating circumstances.

And herein lies the film’s ethical dilemma. Around it writer/director Khalil Sullins constructs a narrative that slips in and out of several grounded, conventional genres — most with a hint of ‘50s paranoia — which help fill out the character and lives of the two protagonists. From within these genres emerge obstacles which widen the chasm between their complex scientific mission and the quotidian. Sullins terms the film hard sci-fi: It’s a story rooted not in fantasy but in very real possibilities. 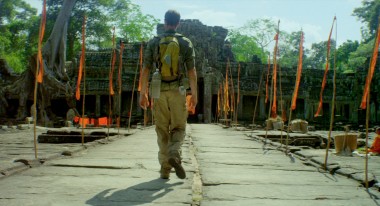 Overlaps and contradictions between the pair’s mundane day-to-day and the frisson of breaking new ground drive the story. Financial problems loom over both guys. Socially maladroit David, the brains behind the operation and owner of the garage in which they collaborate, can barely remove himself from the crammed stolen computers and work stations to go out and earn money (his home is about to be foreclosed), much less pay attention to long-suffering wife Melanie (Christine Haeberman) and needy pre-adolescent daughter Lana (Mykayla Sohn). Ryan, a gregarious, more visceral follower whose priority is pretty young women, also has trouble detaching himself from the multiple cables and gadgets to serve as caregiver for his beloved frail grandmother (Erma Sullins), his only surviving relative and the single constant in his erratic life. He is unable to pay for the old woman’s coffin.

Despite some ups and downs, they work harmoniously, experimenting with microscopic nanotube electrodes which they send via a substance injected into the cerebrospinal fluid at a precise spot in their lower backs. The idea is to attach the electrodes to every neuron in the brain. What a rush shared thoughts can be! Fully exposed, we can no longer filter them. (After David miraculously convinces his cynical waitress wife to let him connect their brains, the test backfires when she accesses his actual preference in females.)

Once they succeed, however, the young men differ wildly on the next move. Perhaps David’s ineptness in interpersonal communication becomes a blessing when he’s up against the wall. He embraces the moral position, which is not to rush things, knowing that the best — and least potentially harmful — outcome requires more time and patience. In a kneejerk reaction, manic Ryan, crushed by his inability to bury his grandmother properly, adopts a different stance.

He does not have ethical issues to resolve. The one night David takes time off for a movie date with his wife, Ryan demonstrates their still untweaked invention for a man called Matthews (Steve Hanks), the shameless head of a top-secret, CIA-like government agency, a man frustrated by his bureau’s failed nefarious attempts to create such a tool (“Kill your sister!”). With Matthews in the garage is a soon-to-be-dispatched investor. The apparatus works perfectly. Ryan is now in it solely for the substantial cash.

The fellas had only recently been joined by a shapely fellow student, Jordan (an excellent Amber Marie Bollinger), predictably an object of Ryan’s desire but also a gifted scientist who helps them fix the kinks in their device. She becomes pivotal in stretching the storyline beyond the confines of the stuffy garage. It’s not just that she becomes a threat to Melanie in the house: She also proves to be a spy for Matthews’s Clandestine Technology Office, located in the basement of a government building in Washington. 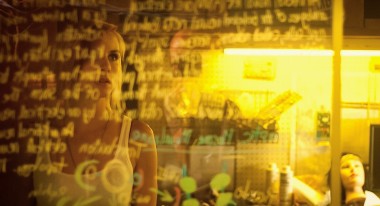 Jordan seductively plays both sides, catering to her boss while protecting her two new charges. She has kidnapped them with the assistance of tranquilizer-filled syringes and flown them to the capital, but neither is missed. Ryan is a loner, Melanie and Lana have left David, and the home is now owned by the bank. Once they begin working in D.C., Ryan buys completely into the agency’s goal of controlling the masses (“the beginning of freedom”); David, however, finds it dangerous, even regrets participating in a process that strayed from its altruistic intention (“the end of freedom”).

Telling much more about where the plot goes from here would be a spoiler. It is so unexpected and brilliantly executed. There is the realization that only mastery of one’s own brain can counteract the technology that harnesses it to dubious effect. Serious meditation, for example, can block the intervention. It’s back to nature, in the form of red-robed monks who reside in an ancient temple in the jungles of Cambodia. This is where Listening begins; most of the film is relayed in flashback.

Sullins grounds the hard sci-fi elements of the story in the actual, but at the same time he succeeds in keeping the real at bay with brilliant distancing strategies. The film is played straight, but much of it is funny, especially the exaggeration. The team injects themselves with a surreal, gigantic syringe; a 3D flicker effect, created with two cameras only a few inches apart, causes the faces of characters who have been shot up to vibrate, signaling a heightened psychological state; the agency scientists engage in arch dialogue; and while Melanie hangs upside down to allow her altered cerebrospinal fluid to drip down to her cranium, she and David hilariously and unsubtly fondle each other.

The most apparent form of estrangement is the coding of the film’s different spaces, all glorious in DP Blake McClure’s expressive widescreen cinematography. Each has not only a color attached, but also a particular movement (if any) of the camera. This formal echo of the theme of mind control — filmmaker messaging spectator — is gutsy and overdetermined but astounding in its effect. 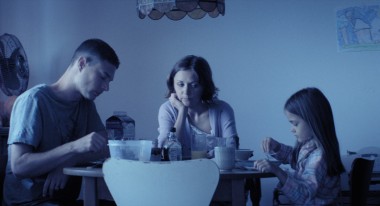 The ennui-inducing interior of David’s home is shot with a static camera through a violet filter. The garage is green, the camera hand-held, hyper. Inside the agency headquarters, the sterile white walls are broken up by reds and blues; the camera dutifully follows the robot-like employees. No color is added to the verdant jungle; tilts and pans are self-consciously soft. Howard Heard edits seamlessly and rhythmically, in spite of an occasionally contrapuntal dance with Sullins’ attention-grabbing alienation effects.

The soundtrack repeats this synthesis of the ancient and the high-tech. Composer Edward Patrick White combines the sounds of a classical orchestra and the voices of a contemporary sacred choir with electronic and synthesized music. He also inserts melodies suggesting thrillers in some seemingly inappropriate spots, but it works.

The combined psychological rush of invention and the ordeal following its completion test David and Ryan’s bromance. They love and hate each other with equal force. Parallel to their true romantic attachments and shared scientific worldview is a potent male bond that would appear to be invincible. Make that almost invincible.