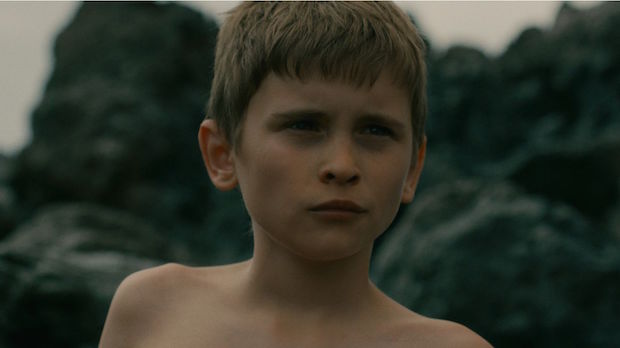 I’m not sure where to start with Lucile Hadžihalilović’s Evolution, if only because I struggling to recall another director in the time since I started keeping up with movies intensively (the last 15 years, more or less) who dropped an immensely promising debut feature, then took 11 years to deliver a follow-up. My expectations were high, met, and possibly subject to confirmation bias; still, I’m very glad she’s back. Hadžihalilović’s Innocence followed a group of young women being schooled in etiquette, beauty et al. at a vaguely sinister private institution, preparing themselves to be sexualized for a lifetime before an implicit male gaze; Evolution gender-switches the sexual fears attendant to puberty.

The setting is, again, an isolated incubation facility, this one for the grooming of young boys. Nicolas (Max Brebant) is one of many interchangeable blond youths (the vibe is very Village of the Damned) being raised by an equally interchangeable group of orange-haired mothers (?) in a dilapidated series of buildings by the coast. The real-world location is Lanzarote, in the Canary Islands; given the French dialogue, the feeling is very much of abandoned colonial holdings gone to seed but still plotting new developments that will be bad for the world. Nicolas suspects that something is amiss, the precise nature of which different reviews have variously discreet in (not) spelling out. For my purposes, it’s enough to note that Evolution is a kind of clean sweep of body-horror tropes and imagery: pregnancy as a deformation of women’s bodies and a young boy’s discomfort with his own changing body are both introduced in imagery specific about their thematics but opaque about the film’s constructed universe.

Like Innocence, Evolution is simultaneously transparent, cryptic, withholding and suggestive; the basic anxieties being teased out are clear, the rules of the narrative game not so much. The underlying ambience is one of menace, but not one that’s precisely articulable, and the film’s most unnerving imagery can only be 90% explicated, even while the triggers being toyed with are totally obvious. I’ve heard some frustration with this approach, but for me Hadžihalilović’s formal mastery and ability to find new forms for basic fears trumps all. Innocence was that very rare film that, in its ability to locate irrational/primordial terrors in banal settings, earned the overused label “Lynchian,” a term that should connote (more than any stylistic tropes, really) familiar and unsophisticated subconscious concerns that gain fresh impact through new, idiosyncratic forms of not-quite-parable self-expression.

Unlike Lynch, Hadžihalilović isn’t into overwhelming industrial noise; she plays up the carefully mixed, vaguely threatening quiet of her isolated surroundings. Her other weapons of unnerving choice are screen-filling, widescreen closeups of distressed faces (in eerie head-on blank gazes and tortured sleep grimaces), lighting both indoors and outdoors for horror-movie darkness without being overbearing, some spectacularly repulsive seafood/aquatic life imagery, and an immaculate score from Jesús Díaz and Zacarías M. de la Riva that surges sporadically, and always unexpectedly, from a meticulously detailed ambient sound mix, beginning as a barely perceptible part of the environment before coming to the uneasy fore. It’s hard, on first pass, to guess whether there’s more than the obvious to dig into here, but I’m not bothered: this is a pleasure to watch, an uneasily gorgeous surface to skate over.