The Union Between DPs and Operators 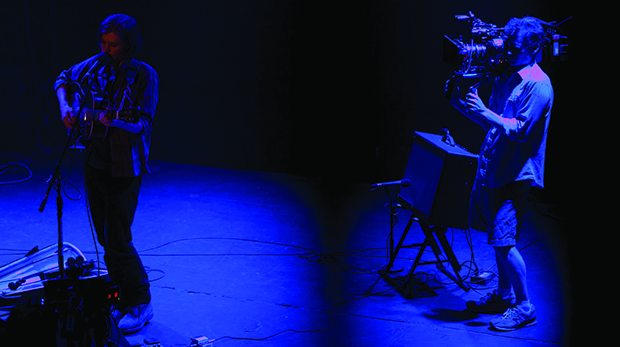 Sean Porter operating for DP John Guleserian on Song One

“And that’s when he started yelling into the phone. No, no, no!” My agent laughed a little bit as he retold the story. The union rep was on the other end of the line, and he wasn’t very happy. “Apparently I was the third person to call him about it,” he said. It was three days before principal photography was slated to begin on my current project, and IA600 had made it painfully clear that there was no way they were letting me touch the camera.

For many of us indie DPs, there has never been a delineation between shooting and operating. What do you mean I can’t operate? That’s what I do. Necessity being the mother of invention, coupled with a scarcity of willing-freebee-pro operators begging to do my early, no-budget 48-hour fly film, operating the camera has always been a huge part of what I do on set. Sure, sometimes I also light, if there are lights, and if I have the time and manpower to actually use them. However in the wake of lower budgets and faster sensors, operating has become the meat of the matter; knowing how to compose an actor in a room, move with them, to become an extension of their performance, to tell the story 23.976 times a second — that’s my job!

And then, from the union rep at the other end of the line, the salt in the wound: “When he shows me that he knows how to work with an operator, I will give more credence to his request to waive one.” Ouch. Being forced to work with an operator felt like I was being asked to paint a picture but couldn’t hold the brush. I was supposed to tell someone how to paint the picture I want? It just didn’t compute.

Being my own operator had previously never been an issue. On my first union gig I learned of this magical waiver; it just sort of made that “problem” go away. You write the union a letter telling them how important it is to the picture that you be the one behind the camera, they say okay, and for four years I stopped thinking about it. The waiver was only introduced around a decade ago; before that you always had an operator behind the camera. Directors of photography did exactly that — they directed their team. The waiver was initiated as part of a deal between the studios and IATSE, which certainly operators feared would lead to their extinction. This fear was fully realized when, in 2006, a new Hollywood basic agreement was proposed and approved that removed the requirement for an operator to be hired on feature and television work. Although pitched as a way to give directors and DPs more creative control, clearly the studios saw an opportunity to save money by dispensing of the role altogether. IA600 unanimously opposed the agreement, but IATSE pushed it through anyway, citing other benefits for their members, including higher wages. Ever since, the camera union has been clutching the waiver tightly and approving it rarely, especially on L.A. projects where operators can work and go home to their families.

I never gave it much thought, but nine times out of 10, usually on the first phone call, a producer will ask me “do you operate?” Of course this was before I had been hired, and while I saw it as a chance for me to show off that I do all my own operating, what I didn’t realize is that it was basically a qualification, not a choice. If a DP is adamant about bringing on an operator, a producer sees this as a hefty line item — sometimes one that was never included in the budget to begin with. I was telling them what they wanted to hear, and I didn’t have to give up my brush. It was a win-win.

Fast forward to my quickly approaching film. The director had brought me on largely based on the compositions and operating I’d demonstrated on other films. For the new work we had designed a small, tight-knit on-set experience, one that was constructed completely around creating the right atmosphere for the director and his actors. No marks, very little equipment. Sensitivity and energy was paramount, and most of the time it’d be just the core of us in a room, me behind the camera, working intuitively with the cast to tell the story. There’s no question he was disappointed when I delivered the news.

My first instinct was, of course, to just “bench” someone. In the past I had been a bench operator myself; you get hired because the union forces it, but you don’t actually do anything. While on that job I was among lovely people, being sidelined from the whole filmmaking process was pretty devastating. In fact, I don’t think I have ever been less happy on set. Eventually I had to change my attitude toward the whole thing and used the time to catch up on reading — a lot of reading! Now it was my call, and I couldn’t bring myself to do that to someone else. So over the next 48 hours I not only had to come to peace with the fact I was going to have to let go of my baby, I had to find someone to give it to!

In a moment of poetic irony, I reached out to my DP friend (the one I had benched for) in search of help. I needed someone good, and quick. “You have to meet Jason!” he exclaimed. “I know he’s available… He was booked to operate the movie I have been prepping, but the studio just shut us down yesterday.” Crazy. I called Jason that very moment, and he came to meet me out at location that afternoon. We hit it off, and I put him on the show.

So then what? To be honest it’s been a steep learning curve. Of course there are moments I want to be the one following that performance, making all those intuitive decisions during a take that makes it something special. But at the same time, freeing myself from the camera has allowed me to spend more time with the director. I can see what he’s responding to, how to do it better, get a plan going and be ready to implement adjustments as soon as he calls cut. We are closer collaborators, in a lot of ways. And now I get that the union wasn’t forcing me to use an operator because they didn’t want me to do it myself, but because they wanted me to understand it’s a choice; a choice that shouldn’t be dictated by producers or unions, but by my understanding of the craft and how to most effectively bring the director’s vision for a film to the screen.

This article (among other things) wouldn’t exist without the support and contributions from my wife and partner in crime, Laurie Hicks — thank you.