“It’s Great. What Are You Going to Do with It?”: Web Series Pilot Zero Point at IFP’s Screen Forward Labs 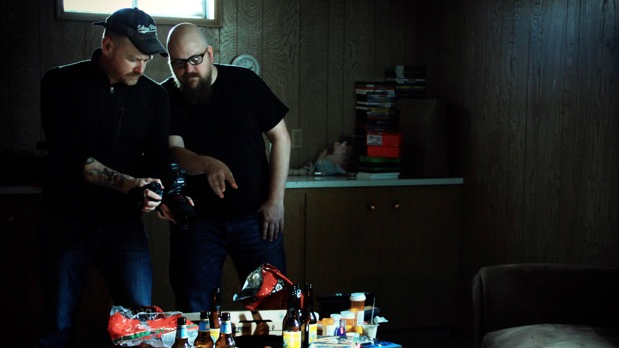 Gregory Bayne and Christian Lybrook on the set of Zero Point

by Christian Lybrook
in Festivals & Events, Filmmaking
on Nov 17, 2015

“It’s great. What are you going to do with it?”

A friend — a filmmaker and media strategist — asked this question after watching the pilot to our pre-apocalyptic thriller Zero Point. But let’s back up a sec…

Two years ago, Gregory Bayne and I set out to make a web series — 8-12 minute episodes, maybe we’d do six episodes in a season. We’d put it out on the web and hopefully people would watch. That was our original plan. But something happened along the way as we were developing it: we remembered why we wanted to do this instead of another short or a feature.

We went back to the start of what had inspired us to make a series in the first place: the “golden age” of television. Shows we love like The Killing or the Walking Dead; more recently, Broadchurch, True Detective and Fargo. It occurred to us that there was no reason independent creators couldn’t bring their sensibilities to long-form episodic content. We could create our own series that (we hoped) rivaled the best of television.

So we set out to create Zero Point. We spent two years working on the world and the characters, creating a near-future scenario where a woman investigating a disease she believes targets teens is a precursor to human colony collapse. We cast the pilot with Idaho actors (where we live) and spent seven days shooting it with a wonderful but bare bones crew. At the end of it, we had a 45-minute pilot, and a bible for our serialized show that walked people through a world where small, seemingly innocuous events lead to the epic story of mankind’s survival against its most devastating foe: its own hubris. Sounds awesome, right? We sent the pilot to some trusted allies.

Our friend was right to ask. No one we knew had really done this before. We had created something for which there was no map. Enter Independent Filmmaker Project’s (IFP) Screen Forward Labs.

This year marked the first time IFP commenced the Labs, dedicated to creators of serialized content in the online space. Ten projects were selected, some of the most innovative episodic work on the web, virtual reality and television. Short- and long-form projects in comedy, drama, experimental, musical, dance and sci-fi/thriller genres.

As a first year endeavor, IFP’s Amy Dotson and Holly Kang put together a compelling slate of panels, speakers and break out sessions. Topics ranged from pitching to financing and development to audience engagement to distribution. The slate of lab leaders who facilitated sessions included Ingrid Jungermann (creator of The Slope and F to the 7th), Michael Gottwald (producer of High Maintenance), Jennifer MacArthur (multiplatform communications, distribution and engagement strategist), and Saschka Unseld (Creative Director at Oculus Story Studio).

The quartet focused each creator team on project-specific questions: audience, platform and immediate next steps. For us, it forced us to clarify what we wanted and how we might go about it. We’re flexible and we have always held that Zero Point could play out in any number of different packages in any number of different platforms. But the lab leaders and our lab peers helped us focus on a single path instead of trying to be everything to everyone, so we put the focus squarely on television.

It was in those interactions, especially talking with other creators and learning from what they’re doing, that the lab hit its stride. Content is changing incredibly fast. Expectations of viewers are too. It’s good to look around at those doing great work and learn from them. We learned from every other content creator. In some instances, we stole from them and their experiences (in the good way) to collaborate and move all of our art forward. A rising tide floats all ships. By the end of the week, the entire fleet had moved into new water.

There still is no map. For as many opinions as we heard, we realized no one has it figured out. What we, as a group of creators, have begun to answer is that original question: “What are you going to do with it?” That answer is different for each project, but we saw how the world of independent content creation is changing from a multitude of perspectives. And as a group we moved past the “web series” to something new, ambitious and bold. (For a great take on moving past the “web series,” see Todd Bieber’s insightful article “Let’s Kill the Web Series.”)

In a land where there are no maps, not only can we create our own paths, we have to. And programs like IFP’s Screen Forward Labs are helping to pave the way.