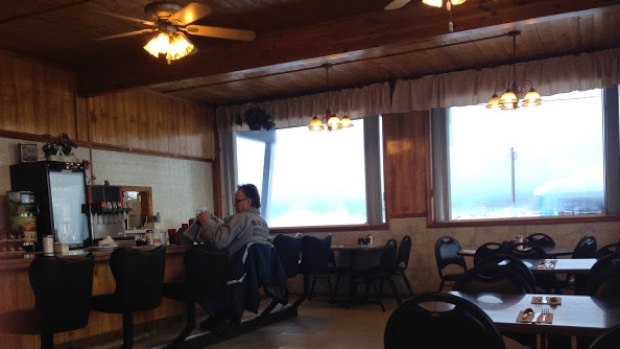 Recently I sat down with a filmmaker who had a good run in the ’70s and still has a bit of a cult following. He asked that I meet him at The Red Deer Diner, at night. The owner would keep it open after closing time.

Kids in Halloween costumes trickled out as I came in. There was Pocahontas and GI Joe. Casper ran into me, apologized, kept going. The filmmaker was already there, sitting on a stool at the counter. I joined him. We both drank black coffee. He said:

“Oh you know, the lady. She’s on Instagram. And she’s the queen bee of her group. She rules with an iron fist. But the iron fist comes in photos of her and her husband in Brooklyn, with their baby, going to the local farming place on their street, reading Jonathan Franzen’s newest novel in her old bath, commenting on how sexy her friends are, and giving the bride a surfboard in front of everyone, on a long lawn, in front of a beach house, beside a dusty Saab.”

“Is she a movie producer?”

“So what does she have to do with your dry spell?”

Spittle flew into the cream. I looked out the window. The neon light of the diner turned off, and crimson orange leaves tumbled down thru the air like high divers.

“Well, listen,” I said. “Whoever she is, she’s not your audience.”I put a hand on his shoulder, patted it, tried to calm him down. His brown leather jacket flaked off some in my palm.

“I know how a person gets deemed crazy. A large group of animals, especially mammals, that live, feed, or migrate together, they create pamphlets…” He trailed off. “You see,” he finally continued, “there’s no way to slow down the communal mind anymore. If you try to do it, they’ll kill you. But not with knives. They’ll kill you with kindness.”

“You want a milk shake or something? Maybe your friend will make you a malted.”

“What I want,” he said, “is for my movies to not be watched on a phone. And for film critics to get off Twitter. And if they don’t get off Twitter, then to put an asterisk next to their review saying that this review was written by someone whose attention span and sensibilities have been shaped by Twitter. Is that too much to ask?”

“Joe…” He called to the man in the kitchen. “Joe, can I get some quarters. It’s laundry day tomorrow.”

“Where the hell did he go?”

“Huh… He probably went outside for a cigarette. Do you have any quarters?”

“That woman with the poodle on Instagram is my daughter. She doesn’t speak to me. And she controls her sisters too. But I don’t blame her. She’s not really making her own choices. They are.”

“They tell her to go on Facebook, she does that. They tell her to go on Instagram, she does that. It’s not her fault. She was always scared of being alone. That’s all it is. It’s just people who are scared of being alone.” A gust of wind smacked a newspaper into the window. The newspaper let us see its headlines and then continued on down the road.

We both drank some more black coffee, and Joe stayed gone, and I listened to some stories, till early in the morning, about Peter Sellers, Timothy Carey and the global conspiracy to hypnotize everyone on the planet into thinking Coca-Cola was water by using superior mirages created by temperature inversions, which bend light rays down so that the false image appears above the true object.

“But you know what’s really scary?” he asked. “When you realize they are you. And you are they. And so why is your mind drying up into this over organized machine? What are you doing in this land at this moment? On this planet at this hour? Where your imagination juices are strangled. Where your strangeness must be holstered. How did the uptight part of yourself become so strong? When did we forget to water our wild?”

Joe came in, blowing on his hands.

“Where have you been, Joe?”

“Well you coulda told us.”

“I didn’t want to interrupt your sermon.”

“Go ahead, tell him,” chuckled Joe.

“Yeah I’m moving to Rome. Because of the climate and various things really. But mostly to make my next movie in the ruins.”

“So you’re making another movie after all.”

“Oh yeah. It’s a movie about America. And I’m going to shoot it at The Pantheon and Ostia and Trajan’s Columns. Because those places are what New York and Chicago and San Francisco are going to look like soon. Actually they already are that, if you look closely.”

“I’m going with the ghost of Tiberius Gracchus.”

“He wanted too much money.”

When the farmers started coming in, we got out of the way, paid our check and left. The traffic light outside was swaying in the wind.

“Oh my gosh!”exclaimed the old filmmaker.

It was a dark brine blue, seasoned with little smidgens of glowing white cloud puffs.

“Magic hour like hell. There never was a way to record that. No paint or camera or word. We’re just a bunch of dumb schmucks.” He walked around the corner and disappeared.

I walked across the street, got in my car. Someone had tucked the feather of a sea gull in my wind shield wiper. Maybe it was Pocahontas.

There are no photographs of Crazy Horse. He never allowed one to be taken. They say Crazy Horse went into the world where there is nothing but the spirits of all things. And those same people say how the spirit world is the real world behind this one, and how everything we see here is something like a shadow from that world.

I stopped at a King Kullen to get some milk. I was only drinking black coffee to seem tough to the ’70s filmmaker legend, and now my stomach was killing me. Inside, I saw the supermarket the way maybe people did back in the 1930s. There were aisles and aisles of anything you needed, anything you wanted, anything you could imagine. It was almost too good to be true.