A minor blip on a warm Chicago afternoon. No one seems to notice that an 11-year-old waif, Tommie (a precocious Oona Laurence) is grabbed and pushed into a car by a stranger, the 47-year-old David Lamb (director Ross Partridge). Her pals — two seventh-grader girlfriends from school standing beside her — don’t even bother to report the feigned abduction, which is David’s twisted provocation after they dared the diminutive, eager-to-please child, decked out in attention-grabbing stiletto heels, to bum a cigarette from this complete stranger.

Unperturbed, Tommie willingly accepts David’s offer of a road trip to rural Wyoming for nearly two weeks: Opportunity — such as it is — knocks. She’s reached the end of her rope at home. The night before, when she returned home, her mother barely acknowledged her presence while father chewed her out for demanding too much attention. Despite their indifference, however, we might assume that at some point following her disappearance her folks, who could serve as billboard parents for some run-down mobile-home park, would go to the cops, who would send out an AMBER alert.

But such assumptions are invalid in Lamb (choose your titular reference). We are not privy to much information save whatever possibilities, real or fantasized, pass through David’s head, and they slide through quickly and frequently. Not particularly malicious, he’s a man whose lifestyle and experience are far from those of the hopeless guys we see on TV’s Lockup. He does, however, realize he has committed an unpardonable criminal act. The kindness and affection he provides needy Tommie quickly disappear whenever he senses the danger of being caught in a hotel room with a prepubescent girl, or in a car crossing interstate lines (and passing through gorgeous fields of flowers and corn, near snow-covered mountains, and under breathtaking skies–stunning photography and graceful jumpcuts courtesy of DP Nate Miller and editor Chris Donlon), or in the basic rustic cabin owned by his dad in the gorgeous wilds of a remote patch of Wyoming.

Daniel Belardinelli’s original music, which includes variations on piano, through volume and pacing, and occasional flute and chimes, is perfect accompaniment to the gliding travelling shots on the road; strong singles such as the rich bluesy “Am I a Good Man?” and the Irish ballad-like “Window,” a sublime commentary on the metaphysical crisis affecting David, magnify its impact.

David’s paranoia is not merely a manifestation of social pathology: It is deeply rooted in psychological turmoil that has festered since his youth. Lying is second nature. He makes it difficult for both Tommie, sharp as she is, and the viewer to distinguish truth from embellished illusion. His tales of haunted rooms, lost relatives, and sadistic killer neighbors reveal a vivid imagination, severe dissociation from reality, or perhaps both. Is it possible some of them are true, that he could be on a cathartic path toward assuaging some guilt brought on earlier in his life? David is a slick, handsome one, the twinkle in his eye and the dimple in his chin major pluses for convincing the doubtful. But he is a tease who is adamant about being in control. 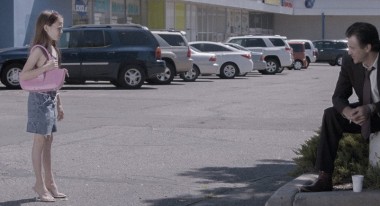 Partridge sets up a back story for David that is vague, maybe fully fabricated. We know he is in a vulnerable spot: At the beginning of the film, his bitter, ill-tempered father dies. We learn right off that David has just become divorced, a fact he hides as best he can, especially from new love interest Linny (Jess Weixler), a pretty, much younger colleague in the same office where lately he has not been carrying his weight. His performance at work has deteriorated to the point where his boss insists he take time off. Setting the stage for a joint deviation from their typical trails and haunts are an aimless David sitting in his auto in a paved parking lot, and a fed-up Tommie with a strong case of ennui hanging out amidst sterile concrete urban boxes only a few yards away.

The cigarette is a ruse, a Macguffin really, which triggers some latent impulse in David to seize the chance for some highly unusual, if highly stigmatized, unspecified, uncategorizable form of bonding. The bottom line, as Partridge tells Stephen Saito in moveablefeast.com, is “(David’s) need for love is so much greater than his logic.” Conventional filters dissolve in a jumble of mental shakeup and surfaced repression.

Tommie stays along for the ride. Her motivation shifts more and more from a desire to escape from an intolerable domestic situation to a genuine emotional involvement with David, who is able to convince his tiny, much younger partner, as he calls her, that he will keep her safe. It appears that this conflicted middle-aged man is engaged in a self-serving form of self-analysis, molding this astute but impressionable girl into a legacy of his own.

If only people didn’t intrude! Not just the nosy do-gooders the pair encounters at roadside rest stops, but suspicious old men like Foster (Tom Bower), a peeping Tom who lives next door to the cabin. Windows are a recurring motif in Lamb, whether they are for looking in or for looking out, or just metaphorical. (“Won’t you open a window sometime?” is a lyric in the song “Window.”) When David goes armed with his father’s rifle to monitor the grizzled geriatric’s intentions, he finds only an oft-repeated reference: death. Is the extensive fatalism a signal? Does David intend to die soon? Can we consider the trip as one continuous death rattle? 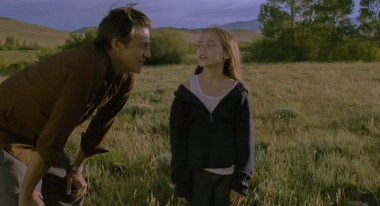 Linny is the biggest threat to the secret relationship, and to the smooth, contradictory personalities David has constructed. He literalizes a schizoid existence, moving back and forth between the rooms in the little structure where each girl sleeps, neither aware of the other’s presence. These very different couplings become a competition, a dangerous game between the David that would settle for society’s approval and the Gary — an alter ego — that nurses his personal needs. For the latter, he tempts fate to his potential detriment.

Literary and cinematic allusions: Does this scenario make the thankless girlfriend a character parallel to Shelley Winters’s schlubby, more annoying, and unconsciously interfering mother/lover in the film version of Lolita? Tommie is certainly no early maturing siren, like the girl of the title, by design or intent. And Gary is no Humbert Humbert: He’s a man of the earth, lacking the wit and pretense of Nabokov’s creation. Gary is no thinker, but he intuits brilliantly.

Gary and Tommie may get hugsy, but whether he crosses the line into pedophilia is an unresolved question, at best, for the viewer. Is his behavior towards her sexual, predatory? Or is it an expression of platonic affection? Lacking the two astonishing lead performances, the film’s courageous forays into relatively untapped territory might bypass credibility. Bonnie Nadzam’s 2011 novel, on which the film is based, is equivocal about Gary’s motives: He wants to rescue Tommie from a life of mediocrity, but he also owns up to her sexual effect on him. In the film, Partridge restrains himself from digging too deeply into either impetus, enabling us to calculate results for ourselves. All of the cuddling with Tommie, whom he’s wrapped in a blanket, his caressing her face and assuring her how beautiful she is: David goes up to the edge of transgression. Crossing the line or not, Partridge, unlike Nadzam, maintains an air of ambiguity.