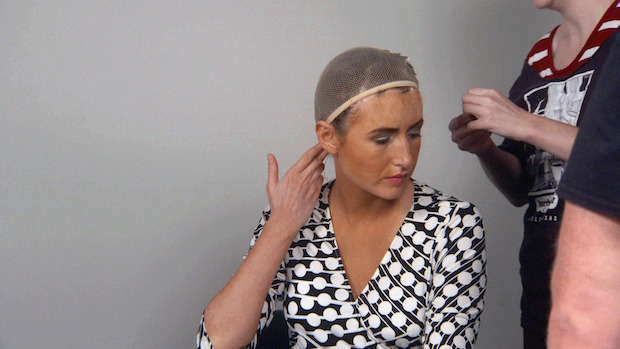 Sarasota TV journalist Christine Chubbuck shot herself live on-air in 1974 and died 14 hours later. The suicide footage exists on one two-inch tape, which is inaccessibly locked up in the vault of the former president of the Florida station (now part of ABC) Chubbuck worked at, so there are shades of Grizzly Man in Robert Greene’s Kate Plays Christine. The premise is that Kate Lyn Sheil’s preparing to play Chubbuck in a movie that will conclude with a recreation of the suicide, and the climactic question is whether the actress can go through with it. Scenes from this ostensible biopic (a fiction Greene uses to instigate the entire film; no full script was written) are integrated into the documentary footage.

Actress amplified Brandy Burre’s real life, but Kate is an entirely constructed situation: without Greene’s decade-plus fascination with Chubbuck’s story, there’s no movie. And there literally is no fiction film being made, just those snippets of hamhanded melodrama, which are mostly dramatizations of Sally Quinn’s definitive (by default) 1974 piece. In substantive part, Kate is actual journalism, with Sheil talking to local historians and friends about Chubbuck, even gaining access to not-on-the-internet footage of Chubbuck on-air in 1972. The rest of Kate is about an actress trying to prepare for a part she doesn’t understand, the real situation Sheil is undergoing; the fragmentary nature of the role is irrelevant for a conscientious performer.

Responses to Chubbuck’s suicide from cast, crew and contemporaries — a wig-maker, gun-store owner, TV station veterans et al. — can be toughly condemnatory, and that’s fair, I suppose, or at least representative of the reactions suicide often elicits. (Nothing jolted me like one of the local actors supporting Sheil saying “I think that anybody who hasn’t thought about suicide isn’t really paying attention.”) Gendered language and perspectives are a constant: when Sheil reads a ’70s news report that speculates in a semi-patronizing way about why attractive Chubbuck couldn’t land a guy (mannishness? bossiness?), she notes, “This language is slightly infuriating…but maybe also accurate.” Uncomfortable, sexist ideas phrased in the most unpleasantly ’70s way imaginable are possibly also real explanations. Chubbuck was probably clinically depressive/bipolar, etc., but it’s not unreasonable (if unsavory) to additionally speculate on how much her prolonged sexual inactivity/virginity bothered her.

It isn’t a particularly warm film. Actress was collaborative, but Kate is almost antagonistic, a movie about a performer struggling to get into a part she can’t intuitively understand in too little time. (A film about an independent film’s making, then, among other things.) What keeps Kate itself from getting too heavy or depressive is how it accommodates a spontaneous ensemble cast. The Saratoga natives Sheil encounters are open and welcoming, and the movie feels made by someone who really likes and cares about people, eager to follow stray presences and integrate sidebar portraits of them.

The peripheral players get off easy, not so much the star. Greene’s previous portraits of women under pressure (Kati with an I, Actress) were purposefully claustrophobic, but this is even more so, deliberately pushing a performer out of her comfort zone and observing the results. Both in and out of character, Sheil is always at a distance from those around her. When she walks into a gun store, she’s herself in present-day clothes, but then suddenly she’s wearing Christine’s wig and re-enacting her firearms purchase in clothing glaringly anachronistic in contrast to those in the store. (In passing, the film is a very good way to make anyone in favor of gun control feel alarmed by the store’s downright normative ambience.) The actress’s discomfort pales beside her subjects: it is a film about the fundamentally uncinematic (because tough to externalize) subject of depression, and it crept under my skin.

Unexpectedly, there is room for two Christine Chubbuck movies. I virulently disliked Antonio Campos’ debut feature Afterschool, a nightmare of Hanake-esque scolding in suffocatingly accomplished widescreen tableauxs. Having skipped follow-up Simon Killer, I thought I knew what Christine would be: another deterministic march from an ominous start to a preordained destination. But if you didn’t know who the subject was, nothing about the beginning of Christine indicates where the film will end. Because the opening scenes are funny and very period-fetishistic about the production methods of mid-’70s local news — observing the transition from 16mm to video against hideously painted anchor desk backdrops, with checkered jackets galore — I thought of Anchorman.

The closest comparisons to Christine I can think of are Elephant and Zero Day, twin 2003 post-Columbine dramas which offer up every possible explanation for why school shootings happen while refusing to definitely finger one. There’s a lot of different incidents and potential “reasons” in Christine, and by film’s end you’re as confused about who Chubbuck was as you were at the beginning. Rebecca Hall’s performance is astonishing: she’s alternately prickly smartass colleague beloved by half the office, literally wide-eyed raving maniac, awkward party floater skulking towards the door, etc. None of her identities cohere, and the movie refuses to assign one part of personality supremacy over the others. This isn’t a diagnosis, it’s a constantly fluxing experiment, and so no two scenes share the same editing/coverage strategy (form and function march in lockstep). Early newsroom scenes suggest Zodiac on a budget, with every prop meticulously sourced and more prominent for the comparative sparseness of the sets; it may not be Best Production Design, but it’s definitely Most Production Design.

Despite a title card which states that this is “based on true events” (an opening that really must be summarily banned stat), something like 8% of this accords with the record. Unless Campos knows something Greene/Google Archives don’t, this is pure fiction, eliding and adding characters, etc. That’s also interesting and unexpected, since even in heavily bastardized form no facile psychological diagnosis is arrived at. But the Big Picture stuff about Christine is thesis-y in a way that drives me off the walls. The ’70s are conceptualized as occurring in the polarized spectrum between soft rock and Watergate. Chubbuck has Gordon Litefoot and Carpenters posters on her wall, representing the false papering-over of national morale deterioration. Her first line is a time-killing interrogation of Nixon delivered to thin air, and the movie almost deteriorates into connecting Chubbuck’s death to A Generational Loss Of Innocence. Watergate media coverage saturates the film — and to be fair, if you look up the articles published about Chubbuck’s death, that’s true of the newspapers they were printed in. It’s still false drama (in my opinion!) to posit such a stark binary for what the national condition in 1974 felt like. That means that Christine, comparatively eccentric though it is, threatens to become a Statement About Its Era, which always irritates me. But it was far more compelling than I expected, and a definite evolution in Campos’ flexibility as a filmmaker; whatever its flaws, I never knew what would happen next, and that’s rare.

I can’t fault the intentions or commitment of Pieter-Jan De Pue’s The Land of the Enlightened. Shot over seven years, this is long-term embedded work. Belgian photographer De Pue balanced commercial work with repeated, months-long treks across Afghanistan, lugging cans of 16mm as he went. His main focus is a group of adolescent boys eking out a harsh survival: smuggling guns and lapis lazuli to the border of Tajikistan, robbing caravans and generally living up to their gang-like name, the Wolves. This footage is bookended by rotely dreamy landscape shots (lots of time-lapse alternated with ultra slo-mo) and broken up by considerably ruder portraits of US boots on the ground. The effect is a little like splicing snippets of Restrepo into A Time for Drunken Horses, Bahman Ghobadi’s ruthlessly miserable drama about two brothers (one handicapped) struggling to stay alive in Kurdistan: one minute you’re watching young boys tearing into a goat’s head (“Bastard! I didn’t get any brains!”), the next you’re with adrenalized soldiers shelling the landscape while yelling “Get the fuckers!”

De Pue first observed the terrain, then hired non-professionals to synoptically enact the many young scavengers he’d met. Resulting footage of young boys wielding guns and casually jacking bags of opium can be startling. De Pue’s 16mm is manifest in aggressive graininess and the occasional scratch on the negative that’s preserved in the digital transfer, which is texturally spot-on. I found myself perhaps unreasonably annoyed by the many lapses in conventional prettiness, beginning with the opening wispy voiceover telling of “the soul of the holy warrior” who wanders “the roof of the world.” This contextualizes Afghanistan in a mythological way that seems a little dunderheaded. It’s true that it’s one of a multitude of options presented to contextualize the present: there’s the recurring emphasis on American soldiers variously cooperative with or set against the local population, Obama’s voice on short-wave radio, and a Russian ballad reminding us of the lingering psychological specter of the failed Soviet invasion. But by about the 15th David Lean-esque wide shot of tiny trains of horses and caravans against the epic landscape, I wanted to scream.