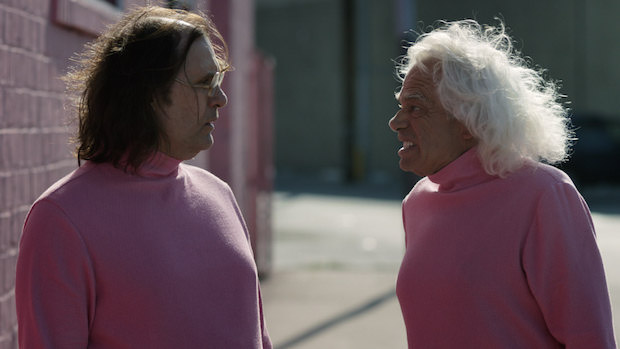 After I had spent a long time labouring over a couple of other scripts, I decided to write something fun and totally indulgent with my friend Toby. This was The Greasy Strangler. It was to be a cathartic experiment. In our heads it would feature this guy Carl, who I had cast in a short film called Crabs that Toby and I had also written. Toby and I just find Carl really funny. So we wrote the main character Ronnie with Carl and Carl’s voice in our heads. When it came to the unexpected actual production of this rather peculiar script, I then had Carl read as Ronnie many times. Carl didn’t quite gel as Ronnie when it came down to it, unfortunately, and in the end I ended up casting someone else. But I had to find a way to feature Carl in the film. He had been such an inspiration in writing the film. So, instead of appearing as Ronnie, Carl appears in the film as the mysterious shape-shifter Danny The Crooner. There are also posters of Carl plastered on walls throughout the film. The posters say that Danny The Crooner appears Tuesdays at The Emerald Lounge. And in the first scene Ronnie drinks out of a mug with Carl’s face on it, the mug also bears the legend Danny The Crooner. My son now has this very mug and drinks his coffee out of it every morning.