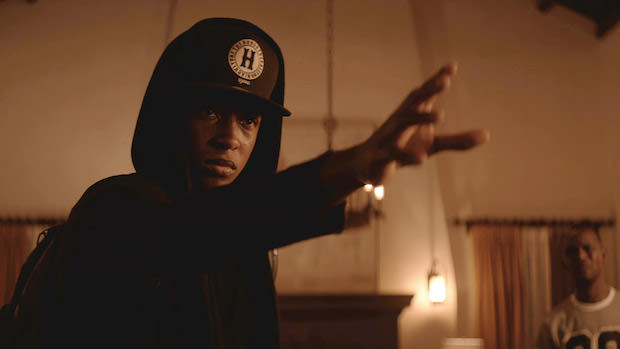 Pushing for diversity in the movie wasn’t necessarily a mandate of ours, but when Alex and I sat down to write Sleight, we wanted to make sure we depicted a world that accurately represented the one we live in. In a movie that acts as a bit of a love letter to Los Angeles, having a diverse cast wasn’t about “making a point,” it was simply adhering to some sort of cultural accuracy. We’re both enormous fans of science fiction, but we feel there are plenty of people, stories, and backgrounds underrepresented by the genre.

With this in mind, we started talking about iconography. We looked at Luke Skywalker at the beginning of Return of The Jedi. Hooded. Shrouded in black. A young man from humble origins who’s grown into his destiny, found his sense of self. With our story centered on a young magician learning to wield a new power, we knew the image of Luke was something we wanted to appropriate.

A lot of how we built our protagonist, Bo, came from thinking of him as a Jedi. Framing him that way, we found an interesting connection — the hoodie. Here we have one of the most revered characters ever created, cloaked in a hood that symbolizes his power. Now imagine you swap Skywalker out with a black kid. What do you have? You have a black kid in a hoodie. We suddenly realized we were playing with a pretty relevant piece of cultural iconography. This black kid in a hoodie has recently been both victimized and vilified but here we had an opportunity to make him a Jedi. We had an opportunity to subvert the expectation of who these kids are. Stereotype, unfortunately, would suggest Bo to be a thug, but get to know him, and you’ll realize he’s an engineer. A passionate learner. An artist. A caring older brother. A friend. A kid just trying to find his way.