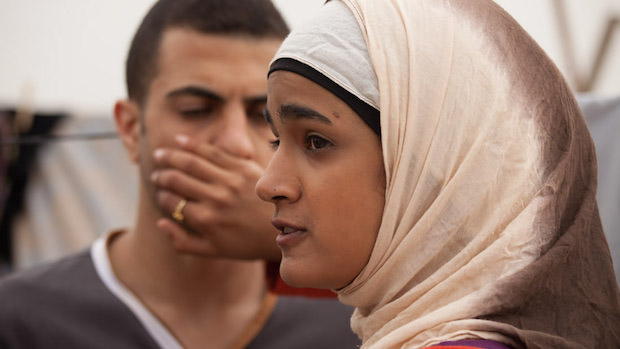 When I first started writing the story of Sand Storm, a drama about a Bedouin family from the Israeli dessert, its title was Almost 12. It was based on a short film I had made a few months before, in which the heroine was a little girl, who feels like she is being forced into becoming a woman ahead of time. So naturally, the heroine of the feature film was the same little girl. A few weeks into the writing I realized that the girl’s story is fascinating, but the real story is her sister’s, who is 18 years old, and is being forced into marring someone she had never met, while she secretly loves another. A few more weeks passed, and I realized I can’t not include the mother, who is 42 years old, and is trying to collect the shatters of her life together after her husband marries a second wife, at the center of the story as well.

So, when I finally had my first draft, the script was divided to three chapters, each focuses on a different hero, each occurs at a different period of time, and together they combined the story of the film. But I couldn’t help thinking – this can’t be it. I’m missing something. I felt like the essence of the film wasn’t there yet. So I went to a script editor. A woman, naturally. She read my draft and said – well, that was a nice try. Let’s start over. Now write a draft only about the 18 year old sister. So, I started over. For three more years, I rewrote and rewrote. Treatment after treatment and then draft after draft. I started with the 18 year old, with time reinserted the mother, and at the end the little girl received her comeback as well, this time they were all combined into one long chapter.

But something else happened during all these re-writes. In each of them, I found the essence I was looking for. And every rewrite took me in a different direction. One rewrite was about mother-daughter relationship. Another was about father-daughter relationship. Another was about sisterhood. The next ones were about determinism, the disintegration of the family unit, women’s struggle to change the rules while living in a society which is bounded by very harsh limits, a patriarchal society meeting the western world, the evolutions of generations… Every draft, I focused on something else, every rewrite there was something else I was missing, and I worked on inserting that specific message or theme into the script.

So now, when the film is done, it’s made out of all these themes. I’ve noticed that if I ever try to summarize the theme of my film into one or two sentences – I always get a disappointed look by the one who asked the question. Not because my answer is wrong, but because he or she connected more to a different theme. I find that to be one of the things I am most happy with, the fact that each viewer has a different opinion on what my initial intention was. That each viewer can relate to what is closest to him. And the most fascinating moments for me are when viewers tell me about themes I didn’t even recognize myself I had in my film. That’s when I sit there and look at them and just smile, so they won’t know they outsmarted me.