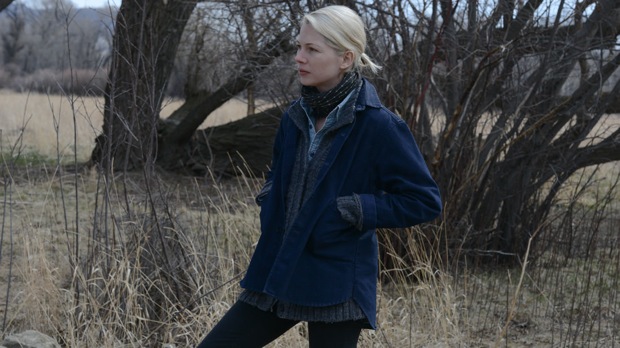 Even by Kelly Reichardt’s disciplined standards, Certain Women brings the rigor. Opening credits are laid over a overhead static shot of a train making its way from the frame’s upper right corner to the bottom left; not quite James Benning’s RR, but that gives some idea of Reichardt’s patience. The “certain women” of Montana have their stories told in three basically discrete segments (there are overlapping characters between each, but no greater cohesion as far as I could tell at first pass). Lawyer Laura (Laura Dern) represents an injured construction worker; unable to get the settlement he deserves, he takes a hostage for leverage. Laura’s sleeping with Ryan Lewis (James Le Gros, at peak beard), who’s building a house way out there for wife Gina (Michelle Williams). The two constantly snipe out of daughter Guthrie’s (Sara Rodier) earshot, who displays zero interest in country living, much less living up to the progressive life aspirations her name confers on her. (Disappointed liberalism and rural retreats: this is the Old Joy Revisited section.) Elsewhere, a struggling young lawyer (Kristin Stewart) makes an eight-hour-round-trip commute to teach school law to petty teachers. The class attracts the bored attentions and ambiguous affections of Jamie (Lily Gladstone), who has no after horse-ranch work hours life in her small town.

Reichardt’s films take place in an atmosphere of heightened quiet, and here she reaches a new level of concentration. Painterly shot compositions sometimes startle, as when Laura is introduced in bed with Ryan: as he gets ready to leave, he’s screen left, with Laura’s face reflected in a mirror on the right of a yellow wall. When he exits the frame, the composition becomes unbalanced, drawing attention to a literal framed portrait of loneliness. The second sequence less charged with dread, and the final sequence is a masterpiece of strategic use of time. We see Jamie’s routine — letting out the horses, distributing hay with a dog running by her tractor’s side, etc. — over and over; the viewing experience is repetitively hypnotic, conveying both tedium and the satisfaction of routine.

I wouldn’t be prepared to extrapolate a larger point; all the stories tap into women repeatedly marginalized, professionally and personally, but they feel so specific and tightly conceived in and of themselves that the idea of Certain Women as some sort of macro portrait of Contemporary Women seems off. As usual, Reichardt dwells in pockets of location sound that are both very quiet and intensely detailed: it’s the ambience of a horror movie where the big jolt never comes. The film is gorgeous, maximizing use of 16mm grain: a shot of the rural landscape from behind a glass window is distorted by both that surface and the celluloid, rendering Montana in pointillist fashion. It’s suprisingly apposite late-night viewing, a long exhale rather than a rapturous swoon; in its deliberately small-scale way, it feels just about perfect.

Whit Stillman adapting Jane Austen makes intuitive sense. As in Austen, Stillman’s fussily articulate characters operate in upper-class milieus where observance of oft-recondite social etiquette is mandatory. He seems to believe that manners are necessary — not because they’re indicative of morality, but because they make life more game-playing fun. It also makes sense that for Love & Friendship, Stillman would choose the novella Lady Susan as his source. Unpublished in Austen’s lifetime, this early work is an epistolary novel with no dialogue save a few big speeches, giving Stillman free rein to write as much pastiche period drollery as he wants. The results are pretty much exactly what you’d expect, which isn’t a complaint.

Widowed Lady Susan (Kate Beckinsale) is a sympathetic monster; penniless, like many an Austen character, with her continued survival dependent on prolonged visits to country houses and, inevitably, an advantageous remarriage. An unrepentant adultress, she schemes to captivate her sister-in-law’s brother Reginald DeCourcy (Xavier Samuel) while fobbing off daughter Frederica (Morfydd Clark) on wealthy idiot Sir James Martin (Tom Bennett). Public professions of maternal interest and general benevolence of motives differ sharply from her private plotting, shared with her American friend Alicia Johnson (Chloë Sevigny). In these sessions, Susan spits elegant venom and contempt for all around her, prospering until the gap between public and private becomes too narrow.

The movie takes considerable liberties with the third act; Lady Susan is no longer punished severely, but allowed to prosper to some extent. Stillman’s other additions and amendations are revealing, most notably a religious subtext that’s not in the book: a curate character is added to occasionally parse the implications of the ten commandments. (No idea what that means, save noting that few filmmakers working sneak in the normative presence of Christianity in such a non-judgmental way.) The country estate settings are predictably lushly pleasing while skirting rote Masterpiece Theater territory. As in any good period film, the servants are silent but decidedly present: clearing the country grounds, flicking off specks of dusk from the furniture in passing, listening at doors. Stillman is still a disciplinedly unfussy director, letting compact scenes unfold in medium shot. Not much more to say besides two performance notes. The bad: for once, Sevigny seems totally lost. Her main job is to admiringly listen to Beckinsale, but her facial reaction shots seem constantly a little ahead of the dialogue and generally inorganic, and at one point I spotted her looking at the floor as if unsure where to walk. I’ve never seen this deservedly beloved actress look so adrift. The good: as the heartily idiotic Sir James Martin, Tom Bennett steals every scene he’s in.

Few would make the case for Indignation as one of Philip Roth’s great novels; James Wolcott’s review bears the flip but not reductive title “The Fatal Handjob,”  and it’s a puzzling source text choice for James Schamus’ directorial debut. His adaptation is an improvement, making practical condensations that cost-effectively reduce the number of settings and characters while also eliding Roth’s most grotesque sequences — no climax of panty-raiding college guys group masturbating in dorms. The story of Newark Jew Marcus Messner (Logan Lerman) and his brief but fatal love for shiksa Olivia Hutton (Sarah Gadon) on the campus of Winesburg, Ohio is represented mostly as a series of dialogues shot in unfussy shot-reverse shot. This simple shot structure isn’t inelegant, but the flat, clean digital look kills the images’ pull, with each scene’s interest left to fall and rising in direct proportion to the players’/dialogue’s strength. One sequence (it’s the book’s best as well) is a standout: Messner standing his ground against the college’s Dean Caudwell (Tracy Letts), who ostensibly is checking in on his freshman welfare during an interrogation that turns increasingly anti-Semitic and proselytizing. The sequence easily exceeds 10 minutes, crackling with well-timed mutual animosity revealing itself in increasingly direct form.

I’d read the book beforehand to prep, which may have been a mistake: I was at all times aware of exactly which point I was at in the story, and thus how much more time there was left. The strange thing about Indignation is that its major adaptation changes seem to be aimed at people who already care about Roth, rather than those coming to the movie cold. Both the movie and book are narrated by Marcus, but the film starts with present-day Olivia, anchoring the film as a memory she shares ownership of with the protagonist. That’s a way of acknowledging and preemptively cutting off criticisms of Roth as a misogynist, but it doesn’t do anything for the film itself. At any rate, Schamus can at least uncontroversially claim the mantle of having made the only at-least-partially-successful, generally acclaimed Roth adaptation to date.