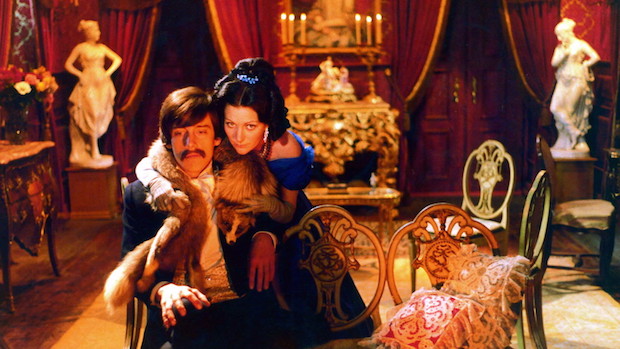 Regardless of what I’m about to say (which is basically that I loved Benilde but the other films in this series not so much), Lincoln Center’s four-day mini-series on Manoel de Oliveira is a major and welcome event. de Oliveira has long been feted by arthouse fiends as one of cinema’s untouchable masters and most rigorous thinkers, but seeing his work is not easy. The prints Lincoln Center is showing are impeccable and gorgeous; if you’re going to dive in, this is the way to do it.

I don’t know who coined the phrase “tetralogy of frustrated love,” but the movies  — 1972’s Past and Present, 1975’s Benilde or the Virgin Mother, 1978’s Doomed Love and 1981’s Francesca — do form a meaningful unit. The first two are filmed plays, the latter two adapted novels. de Oliveira’s major concern is how we define “cinema”: when a page of text is presented, isn’t this an image like any other? In differently disruptive ways, each film foregrounds the artifice of its presentational method while presenting a love story that can only end in death. Past and Present is the weakest, most tentative example, putting the thesis right up front in the dialogue: why do poets always associate love with death? The screenplay is adapted by playwright Vicente Sanches from his own work, and its general premise and tenor are compared correctly, in many reviews, to a less successful attempt at Buñuelian terrain.

Unhappy in her second marriage, a woman spends her days actively mourning her late first husband; she wants what she can’t have, and only that. A group of her friends has gathered to join her at the graveyard where a monumental new tombstone is being dedicated to his memory. This is comedy in the den-of-vipers vein, with all characters varying degrees of self-serving and duplicitous. It’s filmed very adroitly, alternating wordless sequences set with heavy irony to Mendelssohn’s greatest hits (the use of the “Wedding March” is all-caps boldfaced sarcasm) with intelligently filmed dialogue exchanges. The camera constantly frames and reframes the rooms, using mirrors to fill out who’s in the space and managing doorway entrances like a farce; the final effect is of tedious wit.

Benilde is a whole other, staggering thing. Where Past and Present feints in the direction of something like naturalism, using standard adaptation devices to render itself less “stagy” (mid-conversation cuts to different settings etc.), Benilde basically takes José Régio’s play as gospel. During the opening credits, the handheld camera propels itself through a production soundstage’s hallways, dollying in to a still photograph. A dissolve pulls the camera out, integrating it into a set it will exit from two hours later, once again reminding us of the apparatus. While within this setting, though, the camera is absolutely committed to maintaining the already disrupted illusion.

Anyone who was raised under too protectively sheltered circumstances will get Benilde on a visceral level: it’s effectively the story of a teen confined to her house, ostensibly for her own protection from the outside world, who inevitably goes insane as a consequence. It’s the ’30s, and 18-year-old Benilde (Maria Amélia Matta) has been raised virtually without same-age companions by her misanthropic father. For company, she has a hysterically religious maid and a middle-aged pair of ostensibly benevolent patriarchs in a doctor and a priest. “Aside from your father, we are your best friends,” one tells her, and that’s the last thing a teenager should hear. (Generally speaking, anyone informing you that they are your friend is a good sign to start running rapidly in the opposite direction.)

Benilde is pregnant, which she perceives as a virgin impregnation manifestation of God’s blessing; everyone else, understandably, is not so sure. Outside, there’s howling wind and rain that’s no less convincing for the early exposure of its non-existence; we’re able to better perceive how technical tools create a successfully sustained illusion we might otherwise take for granted. The film is exquisitely lit, and the sustained shots give us time to parse the details: the reflection of the room in the cookie jar, tiny heat distortions rising from the fire. This is the kind of framing in which there’s all the difference in the world between the camera being just above or a foot above the fire. Constant dramatic declamations and all, it sped by; when Benilde ended, I felt certain there were another 40 minutes to go.

I got the opposite sensation from Doomed Love. This 252-minute doorstop (mercifully, Lincoln Center has inserted an intermission where none exists) is an adaptation of Camilo Castelo Branco’s novel, made with the conscious intent of preserving each and every narrative development of the hefty novel. This is taken very far: as Randal Johnson notes in his invaluable book on de Oliveira, the adaptation goes so far as to film a duel that’s only a footnote in the text. Teresa and Simão love each other, but their families are enemies; Teresa is installed in a nunnery (“A year in the convent is an excellent emetic for the heart,” her father says) while Simão pines away. It’s clear that the film can’t end until everyone is dead, which made me eventually root for their sooner-rather-than-later extinction.

In establishing the various familial histories at play, Doomed Love is initially incredibly dense and speedy, with establishing tableuxs and resets of the location by the score. There’s an exquisite ballroom dance sequence, observing group rituals with the patient luxuriousness of The Leopard, leading to a sequence of surreptitious courtship ending in violence whose nearly illegible nighttime darkness makes you think hard to try to “see” what’s going on. Eventually, however, the film settles into a routine of endless dialogue delivered in the same few settings for reels at a time. Extreme claustrophobia set in for me, and by the end I felt like I’d been poleaxed by a truck. I admire the extreme conceptual rigor abstractly and personally couldn’t handle it. I was reminded of the feeling I had reading Samuel Richardson’s Pamela, which grinds on for well over 600 pages: will this thing ever end? This is cinema as forced binge-reading.

I can’t get very far in understanding Francesca. Sporadically droll where Doomless Love is sepulchrally intent, this adaptation (of Agustina Bessa Luis’ book) takes the opposite approach to its predecessor, freely condensing action and scenes into intertitles. It is, nevertheless, still three hours. There are more lovers who must die for the film to end and more obsessive self-stifling romantic patterns. There are some indications we’re not to take the self-serious dandies onscreen too seriously. As they talk about their admiration for Lord Byron (“Five percent of Portuguese are Byronists”) and dispense unasked-for aphorismss, they frequently look ridiculous: in a long scene at the theater, the two best friends who are the film’s subject won’t shut up after the lights go down, talking during the quieter bits of the overture despite repeated shushing. Indeed, the film opens with a mildly gutbusting image: the novelist Branco facing the camera with a mustachioed, dolorous Buster Keaton stoneface as group dancing unfolds behind him, a total disconnect between self-serious tragedian totally not feeling the hijinks around him. Francesca‘s sense of humor regularly manifests in ways that are obviously intended to be be humorous, and “Who’s dead? Another poet at this time of year a lot of them die. Dysentery of the soul gets them and they’re gone” is pretty funny. And yet ultimately I have no idea what’s going on in this movie, what it wants of me, what kind of viewer it wishes to construct etc. There are forms of frustration I enjoy; this isn’t one of them.