No More Parties in LA: Knight of Cups 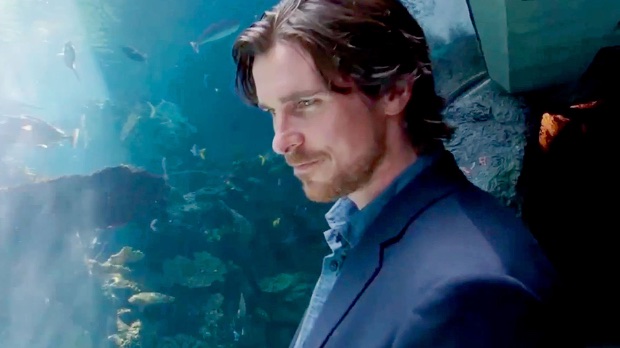 Here’s a snatch of dialogue I never thought I’d hear in a Terrence Malick movie: “My life is like playing Call of Duty on easy. I just walk around fucking shit up.” A good line: punchy, funny, mining comedy from an unexpected analogy, profanely concise and self-aware. It is also exactly the kind of thing you’d never expect to hear in a latter-day Malick film, where dialogue is nearly forbidden and vocal self-expression confined to vaporous voiceover. Malick began as a screenwriter for hire, and in Badlands (and only there) he displayed a great gift for laconic humor. For whatever reason (and it’s his life, he can do what he wants), Malick has decided that he has no interest in exploring this, and instead that everyone should express themselves in the wateriest possible way.

For Knight of Cups, actor Joel Kinnaman reported that he showed up for one day of shooting, in which he delivered a 17-page monologue. I’d love to know what was on those pages, especially since I doubt there’s 17 pages of audible dialogue in the entirety of Malick’s latest. By all accounts, the director’s working method these days is a variant on the thousand monkeys/typewriters principle, in which a battery of editors are given unfathomable amounts of footage to sort through. Judging by the brief snippets of what we hear from the extremely large cast, there’s probably an excellent comedy that could be constructed out of the raw footage. It’d be a movie about Hollywood debauchery tackled through savage laughs, and it’d be way more engaging than what we have to work with here.

To the Wonder succeeded because it inverted Malick’s desire to locate immanence in everything; it was a profoundly negative movie about a failing relationship, buttressed by a separate story about a crisis of faith. Knight of Cups seems like a negative movie at first, but it’s really a road-to-nebulous-redemption story, as signaled by the opening reading from Pilgrim’s Progress. (I can’t top number-one Malick fan Bilge Ebiri’s Twitter crack that “Christian Bale” would logically be the perfect name for the character the actor plays.) Reworking Tree of Life (and, by extension, his childhood), Malick once again gives us a professionally successful but personally troubled man, freighted down by a beloved brother’s childhood death and an explosive father’s heavy hand. In eight chapters, six of which concern relationships with different women, Bale expresses himself in the broadest possible emotional terms: “You gave me what the world can’t give — mercy, peace, love, joy.” Etc.

It was possible to tune out this verbal filler in Wonder, but there’s not much else to really focus on in Cups, until finally you’re reduced to focusing on hearing Bale sigh things like “Ah…love.” There is, yes, a lot of running around between besotted lovers, and an awful lot of implied sex, though almost none onscreen, a weird absence that’s more uncomfortable than even a bad sex scene would be. Part of the problem here is admittedly mine: I almost never recognize anybody, famous people included, so I’m sure the film’s more fun and meta-playful if you recognize players like Ryan O’Neal or Bruce Wagner; without that knowledge in my head, everyone flowed by in one anonymous stream of pretty people. There’s an argument to be made about the film’s construction. By creating and filming essentially an entire world and then subsuming it to this terrible voiceover, Malick creates the subjective experience of a distracted consciousness skimming over its own existence. The trouble is that this consciousness doesn’t seem particularly worth inhabiting or prove particularly illuminating. It is, finally, rather difficult to feel bad for a man who, wherever he roams, is given the come-hither gaze by dozens of attractive women, “perils of lust” or no. Bale moans at one point that he’s not who he was supposed to be and wonders how he lost his way; I’d suggest that the title, laid over a childhood photo and scored by a cut from Adam Sandler’s album, What the Hell Happened to Me?, would make the same point more succinctly and forcefully.

Lastly, there’s that matter of workflow. Like To the Wonder, Knight of Cups has both celluloid and digital source material to work with, and some of the imagery is Malick’s most aggresively non-film textured yet; to his credit, he’s not trying to make digital look like film, but probing what it is and could be. (That said, this isn’t exactly Blackhat, but at least he’s trying.) But because of his unique editing method, Malick is perhaps as purely a digital filmmaker on the post-production level as Michael Mann is on the visual one. It’s logical to expect him to go eventually full digital, where I expect him to keep pushing himself. As he’s obviously trying to do so here, which makes the film hard to hate; movies with far worse intentions have been made. And yet.