“The Original Pitch Couldn’t Be Said in Less than a Thousand Words”: Robert Greene and Kate Lyn Sheil on Kate Plays Christine 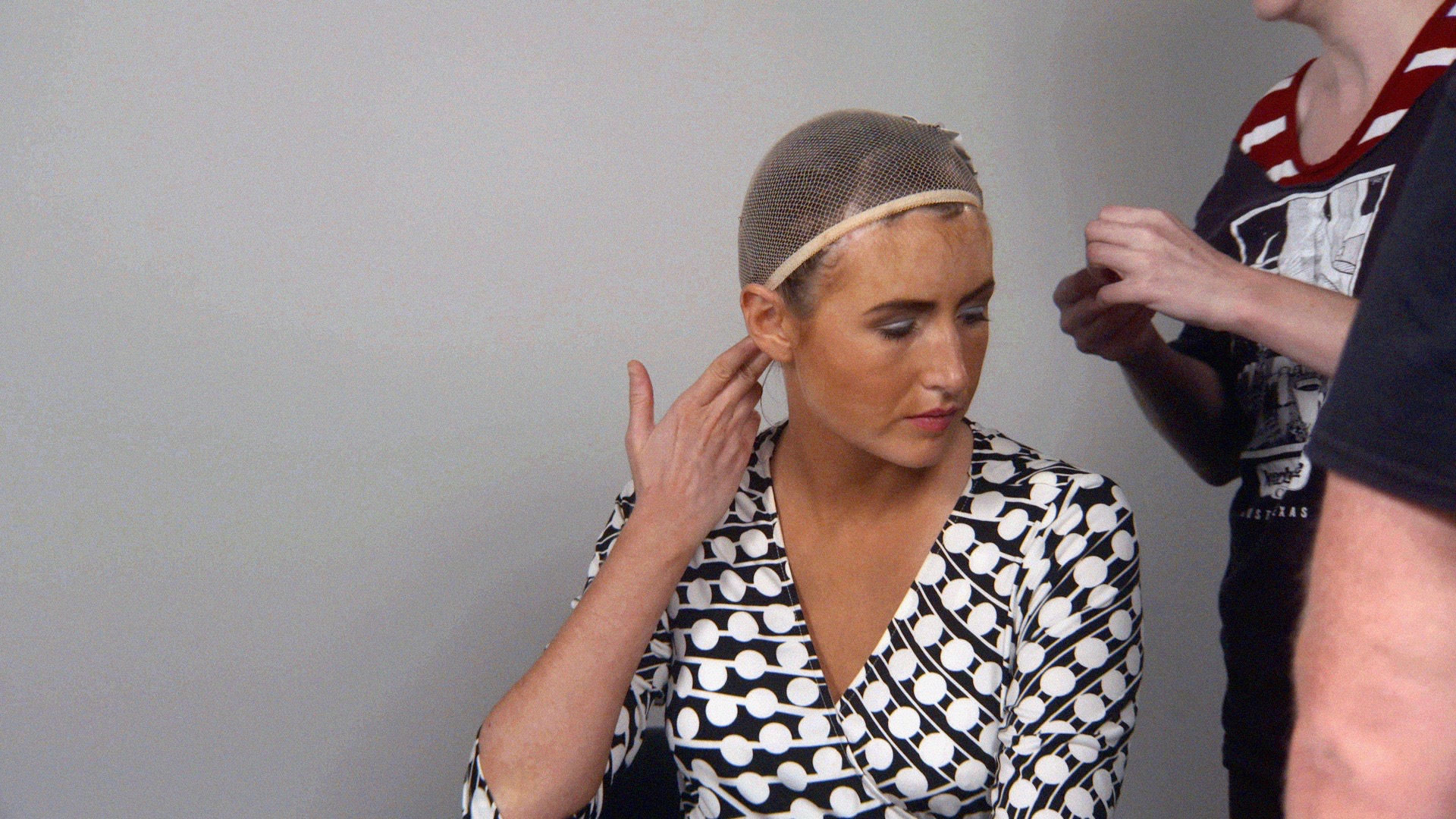 After winning the Special Jury Prize in the U.S. Documentary Competition at Sundance, filmmaker Robert Greene and actress Kate Lyn Sheil arrived in Berlin for their international premiere of Kate Plays Christine. Of the 44 titles slated in Berlinale’s Forum, Greene’s documentary is one of only three American films to have been selected to screen. The film is described as a documentary, but the nature of the project has a complicated and multi-layered explanation.

On one level, the film follows Kate preparing for a role, but the character she must assume isn’t written in a script. She’s researching to play Christine Chubbuck, a 29-year-old newscast journalist in Florida who committed suicide on-air in 1974. The footage of her suicide has disappeared from public record, and little is known about the episode, much less about the woman who shot herself on live TV. On this level, Kate Plays Christine investigates how an actor can prepare for such a role — a woman with a horrific legacy and a mysterious, largely forgotten identity.

On another level, Kate Plays Christine sets out to interrogate the intention to represent Chubbuck. The purpose was never actually for Kate to play Christine, as the title leads us to believe. Sheil was tasked with preparing for a role in a movie that she knew would never exist. It’s helpful to think of it as though she’s playing Kate, the actress, play Christine. And yet, this explanation still doesn’t fully account for other sublevels of play, of performance and performativity, and experimentation. I don’t know what is more satisfying — the ambiguity and layers of complexity while experiencing the film or having the chance to talk through Greene and Sheil’s process of having made it. Kate Plays Christine makes its next festival appearance this weekend at True/False.

Filmmaker: How does the actor/director relationship work for you?

Kate Lyn Sheil: Directing is such a weird art and the relationship between an actor and director is so strange. What is usually most helpful for me is when a director prepares you as much as possible beforehand and then kind of leaves you alone. It’s a very instinctual thing to know how to gently guide an actor, and when to step in. But the process of making this movie was so specific. And the reason Robert asked me is because we know each other incredibly well. Any reservations I may have had about doing a film in this format and exploring the life of this woman — who I’m very interested in, but who also was a real woman who took her own life — were assuaged by my trust in Robert as a filmmaker. And the relationship between us was unique in this situation. I always knew that whatever I was doing, he was doing something on his own, that at times seemed counter to what I was doing.

Robert Greene: The concept was very well-prepared, but the concept was about not being prepared. We were navigating the difference between the conceptual framework of the film and what happened when we started rolling. I was asking Kate to be herself, to act as herself, to act in scenes written purposefully bad, and to also find something real. It was like four layers of something that’s in a lot of ways the opposite of when an actor has to bring a character to life from what’s written on the page. Kate and I share a certain level of trust and mutual understanding, but this was more than a normal collaboration. Kate had to take a concept and turn it into the thing you see.

Filmmaker: What’s the root of your fascination with actors?

Greene: I’ve made four films that are in some way or another about performance and two films that are specifically about actors. I remember in college thinking how much I hated actors [laughs], and just in general, feeling like I didn’t get along with “theatre types.” But then I realized it’s really about me, and my own feelings about myself as an actor, having always wanted to be one as a kid. There’s something about being real against projecting a version of yourself that interests me. It’s about being a performer. Social performance is one of things that holds society together. We’re performing for each other all the time – not just to project who we want to be, but also, to communicate deeper things about who we are and what we want people to think of us. And I think this relates to Christine Chubbuck, in how she related to the world as a performer, in a sense. There’s this tension between the social fabrication, the deeper real truth, and how those two things speak to each other.

Sheil: I’ve only seen it once, at the Sundance premiere. I had an aisle seat so I could take off at any minute, but I had a surprisingly pleasant time watching it. I was sitting next to our friend Sean Price Willams, who shot the film, and I think his presence was leveling or took me out of my head in a way that was good. I’ve done a lot of films where I’ve been tasked with playing people who are relatively close to me, so it’s not a totally unfamiliar experience. It feels weird that people will watch the movie and potentially think they’re getting a glimpse into what I’m like as a person. Yeah, that is me walking around, so sure. It’s weird to reckon with yourself in that way, but I don’t feel that I’m really revealing that much or that the film is super invasive. There are parts of me that are very much not in film. That being said, there are some things I say in the film that are real thoughts of mine.

Filmmaker: Like when you say you’ll lose your mind if one more critic calls a performance of yours “subtle?”

Greene: When I watch the film, I do think that’s Kate, but the Kate I know would never open or expose herself in this way for anyone, so part of what you’re watching is someone trying to negotiate how she feels without giving too much, and that’s the Kate I know in real life. That’s a guarded thoughtful person and the way that’s intermingled with performance and how she’s acting is interesting.

Filmmaker: What’s the worst part of acting for you?

Sheil: I love acting, but it’s frustrating to try to be good or as good as you can be. The fact that I’m a private person but want to be observed in some sort of public way is a frustrating dichotomy for me. The other side of acting that’s involved once a movie comes out is overwhelming to me. But it’s also a luxury to even be involved, because it means you’re alright and working. In terms of the subtle thing, I’d do anything with Robert and Sean, and I love this movie, but the kind of subtle nature of the work that I felt was necessary for this film is something that I’m a little bit tired of doing in other situations. I’ve worked a lot in improvised films, and it’s been wonderful, but I want to be handed a script and given character work to do.

Filmmaker: Robert, how do you see yourself performing the role of “director” in the film?

Greene: The film is about me failing as a director on some level, but it’s not on another level because I’m enacting the whole thing. It’s weird. It’s trying to be self-interrogating without self-aggrandizing our own problems. My character as director is relevant in terms of what we’re trying to create, but if it somehow turned into The Jinx, which has a whole episode where the director is fretting over himself, then it turns into this thing I don’t like. I do understand that instinct, but it can easily dip into an ego-driven process. How much we are exposing or talking about ourselves needs to be modulated into a zone of how to understand Christine better, or at least how we can’t understand her better.

Filmmaker: Did you ever feel like you were actually failing?

Greene: The original pitch couldn’t be said in less than a thousand words, so it was kind of always a mess as an idea. While we were filming, I felt we were barely grasping onto things as they were happening, but I knew we’d be lost. I was very dependent on Sean and Kate to figure it out, and because we were so invested, I felt confident that something would come together. But editing was excruciating — to try to put the pieces together and let the concept disappear, in some ways. I felt that the film was a complete utter failure until the last second. Funnily enough, someone told me that the film did turn out to be exactly what I pitched.

Sheil: It did turn out relatively similarly in structure to the outline we had. But when we were on the ground, each new thing we shot felt like maybe this is the movie —

Greene: That’s how the documentary process works. For me, successful documentaries often embody what the people are feeling as they’re going through it, and the audience is often feeling the same thing the filmmakers and the people in the film felt as they were filming – the nature of following something. That’s super important for me to try to get across.