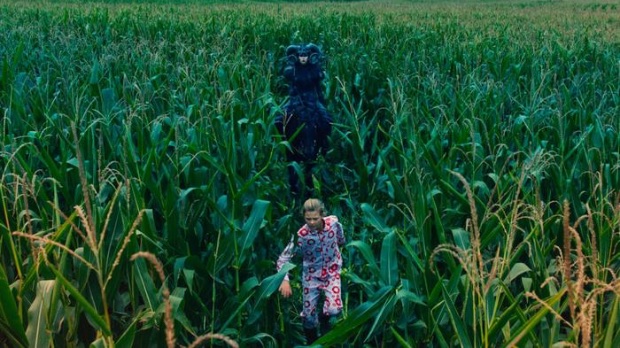 by Scott Macaulay
in Directors, Interviews, SXSW
on Feb 17, 2017

The below interview was originally published during SXSW 2016, when debuting filmmaker Anne Hamilton premiered her ’80s-set, gothic thriller, American Fable, which melds del Toro-esque fantasy with a critique of Reagan-era economic policy. The film opens today in New York at the IFC Center.

World premiering in the Visions section of SXSW is American Fable, the debut film from 2014 AFI Directing Workshop for Women graduate Anne Hamilton. Before beginning her career in film by working on the set of Terrence Malick’s The Tree of Life, Hamilton studied law and philosophy, and, as she relates below, she applied aspects of her education to her first foray as a director. Below, she discusses her career path, the political dimensions of her film and what she learned from Malick.

Filmmaker: This is your debut feature after studying law and philosophy. How did you left-turn into filmmaking, and how do you think the study of those disciplines influenced your choice of material and your approach as a director?

Hamilton: I just love philosophy, and I was the president of the philosophy club in college, so that probably tells you something about how much of a nerd I am. Philosophy is a wildly imaginative discipline because it trains your mind to see the limits of human experience in a systematic way and to come up with scenarios that test our intuitions about what the truth and the good are. The study of law is different — it trains you to be able to argue both sides of a viewpoint. I think great films do both of these things. American Fable really tests our concept of right and wrong and argues both sides for every character, and that’s part of what makes it a strong story.

Filmmaker: Why set the film in the 1980s? What challenges did that that confront the production with, and how did you surmount them?

Hamilton: Setting it in 1982 allowed me to talk more freely about an important political and social issue — the disenfranchisement of middle America — but it’s also what makes American Fable a timeless story. We don’t really see the past clearly, we romanticize it, and so you can use that to make a story that is set in the past seem timeless instead of dated, provided you handle things with a soft touch. The challenges were mostly for my production design and costume teams, but I think they had a lot of fun with it, too. All of their choices for the period are really brilliant, but subtle so that they don’t draw attention to themselves.

Filmmaker: Describe your collaboration with your DP, Wyatt Garfield. How did you develop the film’s visual schema and imagery together, and what production choices did those ideas lead to?

Hamilton: I really wanted to combine a del Toro kind of movement and playfulness with a Kubrick style use of lenses and angles, and a Fincher kind of color awareness, so we really studied Pan’s Labyrinth, The Shining and Se7en before shooting began, and came up with our own short hand language for the visuals. For example, there are quite a few shots where Gitty is running to pick up an object and we pull back to reveal it as she moves towards camera, and that became a thing we did over and over with different important objects in the movie — the chicken, the chessboard, the ax etc. It’s creates a subtle sense of unease with the audience, especially on a wide lens like the one we were using, and once we set it up, people subconsciously know this also means the object is important. I also had a color associated with each character — for example, Vera is purple and Gitty is eating a purple cotton candy when Vera shows up to show she will be influenced by her. Also, Wyatt lit the silo with a special blue green, and we slowly brought that into the house as the story progressed to show that the worlds of the silo and the family were combining for Gitty.

Filmmaker: The film is described as a fairytale thriller, but it’s set in a real moment of economic crisis that’s not too distant in American history. What kind of balance between the imaginary and the real were you trying to strike with this film?

Hamilton: American Fable is a fairytale thriller on a first viewing, it can be appreciated as just that. Under the surface, however, it’s also an allegory about the disintegration of America that’s happening right now and started during the 1980s. I think having two levels or intention at which the movie operates is a difficult but important thing to do in a film because I want there to be a pay off for a second viewing. It’s all about the layers. The balance between the two was achieved by having the magic of story happen completely through Gitty’s perspective — there’s really is only one scene where she’s not in it or observing, but it’s a quick one – and then letting the real story happen around her. There’s a lot going on that we don’t see, but it’s implied.

Filmmaker: Finally, you worked as an intern on Tree of Life. What sort of influence did that experience leave with you, and how did it affect the way you approached American Fable?

Hamilton: I worked for him in 2008-2009 as an intern, which was a long time ago now. Terry definitely changed my life when he called me and offered me the internship, and as a young 20-something who had never met a director before, I just soaked in all I could by being around him and watching his leadership style and editing instincts. My style is very different from Terry’s aesthetic, however. I think the biggest thing I learned from him was how much patience and focus it takes to lead a group of people. For a director, making a movie is sometimes like pushing a 747 full of people down a runway by yourself, and you’ve got to have a lot of inner strength to do it gracefully. Terry has that in spades.