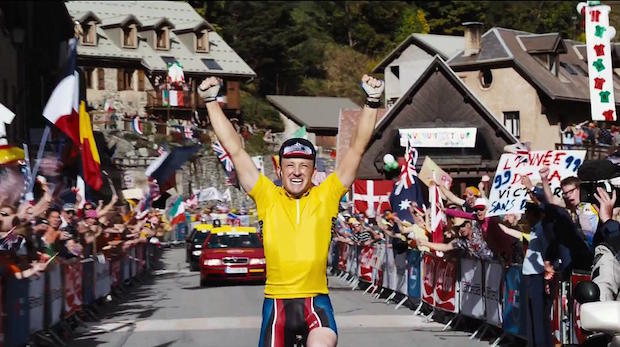 by Matt Mulcahey
in Columns, Directors, Interviews
on Mar 21, 2016

“When I’m out there, physically I’m not more gifted than anybody else. It’s just this desire. This hunger,” intones Ben Foster as Lance Armstrong in the opening narration of The Program. “My mom didn’t raise a quitter and I would never quit. That’s heart, man, that’s not physical. It’s not legs. It’s not lungs. That’s heart. That’s soul. That’s just guts.”

That’s the great fallacy of the American underdog sports drama — if you have enough heart and enough guts, you can succeed. It’s the underlying myth of Rocky and even based-on-fact tales of athletic fortitude such as Hoosiers and Rudy. It’s a bit like the myth of the American Dream itself – that anything is attainable with enough perseverance and pluck.

But as we soon discover in director Stephen Frears’ chronicling of Armstrong’s fall from grace, it isn’t intangibles but rather physiology that determines cycling immortality. While Lance Armstrong may well have had an abundance of heart and guts, what he didn’t have an abundance of were the red blood cells necessary to be an elite endurance athlete. In essence, genetics had rendered him defeated before he even began pedaling. That is, until the seven-time Tour de France winner initiated what the United States Anti-Doping Agency labeled “the most sophisticated, professionalized, and successful doping program that sport has ever seen.”

The Program never reclines Armstrong on the analyst’s couch to probe the psychological underpinnings of his need to succeed at any cost. The film’s mechanizations are more journalistic – fitting since its protagonist is the Irish sportswriter David Walsh, who helped tumble Armstrong’s house of cards and whose book Seven Deadly Sins serves as the film’s primary source material.

Frears — whose long career includes Dangerous Liaisons, The Grifters, Dirty Pretty Things, and The Queen — spoke to Filmmaker about crafting what he views as a “modern crime story.”

Filmmaker: There’s been no shortage of doping scandals in the last two decades in professional sports, even just in the world of cycling. What about the story of Lance Armstrong attracted you?

Frears: I thought it was a very good modern crime story. And sport plays such a huge part in people’s lives.

Filmmaker: What is unique about Armstrong – compared to someone like Barry Bonds, who was never particularly beloved before he was caught cheating — is the dichotomy between Armstrong’s public persona as an inspirational cancer survivor and his private persona as someone who bullied to keep his secret. Was that contrast part of what interested you?

Frears: Yes, of course. It wasn’t a simple case. It was complicated. He was in many ways heroic. He overcame cancer and he raised all that money [through his Livestrong Foundation].

Filmmaker: Rather than just being a director-for-hire on The Program, this was a project you initiated and shepherded through the production process. How did that process begin? At first you considered the autobiography of Tyler Hamilton, who was a teammate of Armstrong’s, as your source material, correct?

Frears: That’s right. We wanted to buy Tyler Hamilton’s book because he knew everything, really. He took drugs with Lance. But he wouldn’t sell it to us.

Filmmaker: In addition to David Walsh’s book, what other research went into putting the film together?

Fears: I knew nothing about cycling before making the film. I knew nothing about Lance. I knew nothing about drugs. I had to learn it all. We had a very, very skillful researcher who did an enormous amount of work and found all the people. In the end, people tell me that we got the story right. And, of course, we were surrounded by people who knew [Armstrong]. The cyclists who were working with me on the film had all ridden with him and then knew perfectly well what was going on.

Filmmaker: Did you make any attempt to speak to Armstrong?

Frears: No, not at all. Not remotely. Quite the opposite. We had to be seen to be neutral.

Filmmaker: How did you settle on John Hodge (Trainspotting, The Beach) to write the screenplay?

Frears: John was a doctor, so he understood the science involved. He knew what the effect of the drugs was. He knew where the drug came from. He knew all that medical stuff. And he’s a very good writer.

Filmmaker: Ben Foster seems to be a pretty intense fellow – and I imagine that extended to his preparation for this role.

Frears: Well, he had to get himself into the right shape. Armstrong, when he recovered from cancer, he changed his shape [to a slimmer one more befitting a cyclist’s body], like Frankenstein in a sense. And Ben had to learn how to cycle like a professional. It was very hard work for him, but he was fantastic.

Filmmaker: What was your shooting schedule like? You had a limited budget to work with considering the film’s scope – which covers roughly two decades of Armstrong’s life and hops between the United States, France, Belgium, and Switzerland.

Frears: It was quite tricky. In the end we could only make the film because we had access to archives [of race footage] and then it’s very well edited. We only staged very little bits [of the races]. It’s a huge circus, the Tour de France. It’s sort of a big advertisement for France. You couldn’t [actually shoot] a day at the tour. It’s too large an event. So we had to do it the way that we did it.

Filmmaker: I wouldn’t call The Program a particularly flattering portrait of Armstrong, but you do include a moment where he visits a pediatric cancer ward and does an extraordinary kindness. Why was that scene important to incorporate?

Frears: Well, he recovered from cancer, he set up Livestrong, and he raised hundreds of millions of dollars. It’s not inconsiderable. It’s quite impressive. And of course that also became part of the way in which he concealed what had gone on.