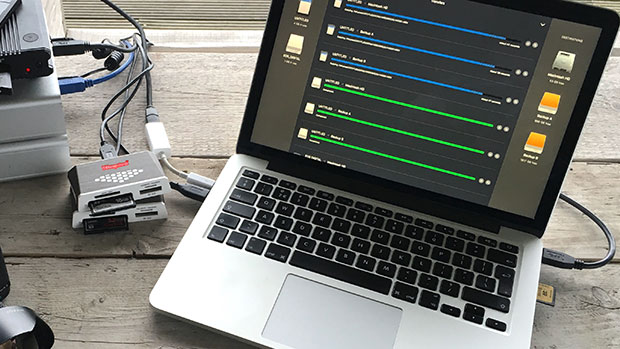 by Michael Murie
in Post-Production, Production
on Mar 23, 2016

Released this week, Hedge is an OS X app for streamlining the process of importing camera footage and making backups. Hedge will transfer multiple disks at the same time and verify each copy.

Paul Matthijs Lombert came up with the idea for Hedge, and is CEO of the developer, The Sync Factory. He answered the following questions via email.

Filmmaker: Where did the idea for Hedge come from?

Matthijs Lombert: I’ve been an acoustician and mastering engineer for over ten years. I originally came up with the idea for Hedge when working on a Dutch multicam documentary. I designed the audio workflow for it and was asked to have a look at the video workflow too. One thing led to another, and in the end we built a complete 5D with LTC-to-Avid workflow for them (in AppleScript!). That’s when we decided to find investors and build it into an OS X app.

There’s a big fear of doing it wrong when handling data because the users are creatives instead of nerds. We want to build an app that really makes your life easier and boosts creativity. It’s a long stretch to think we can do that with what is basically a Xerox app, but we’ve got more in store.

Filmmaker: How would you differentiate it from products like Adobe Prelude or Red Giant’s now discontinued BulletProof?

Matthijs Lombert: Those apps are very useful when you have a lot of knowledge, and want to dig in deep. The users Hedge has are camera operators, 2nd AC’s, data handlers — not DITs. With Hedge we focus on the user that just wants multiple safe copies instead of diving deep into the footage. Most of the time, they’ve got more to do than just offloading. 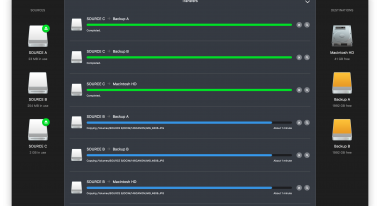 Filmmaker: How do you use Applescripting to extend its functionality (for example, to process video to create a proxy version?) Or can you do that without using Applescripting?

Matthijs Lombert: You can use AppleScript to tell Apple Compressor to create proxies, or use ffMpeg to build your own transcoder like we did with our DNxHD/MXF creator. A broadcaster uses Hedge to ingest media and a script to move files around the network where their hardware transcoders pick them up. But it can be a lot simpler than that too: we have a script that keeps the Photos app from popping up every time you mount a disk.

We’ll be launching a site very soon with examples and how-tos.

Filmmaker: What is the difference between the paid and the free version?

Matthijs Lombert: The free version is limited to two running transfers, and it queues all others. You manually start the next two when they’re done. It’s aimed at small productions with one card importing to two backups.

With the paid version, you can queue transfers which Hedge will process automatically based on the amount of disks you have connected. The copy engine is very scalable, so Hedge can do 20 simultaneous transfers as well as two. This way you can import, for example, three media cards to three backups simultaneously. Because Hedge is smart in parallel processing, the speed gain can be huge. There’s a nice benchmark in this article: Speeding up your on-set backups

Filmmaker: Anything else that you think someone should know about the program?

Matthijs Lombert: We’re a team of four, located in Amsterdam and funded by Dutch investors. We developed a lot more than just Hedge. We’re looking for ways to build all of that into Hedge without creating space shuttle software, so it might take a while before Hedge can do everything we built for that documentary.