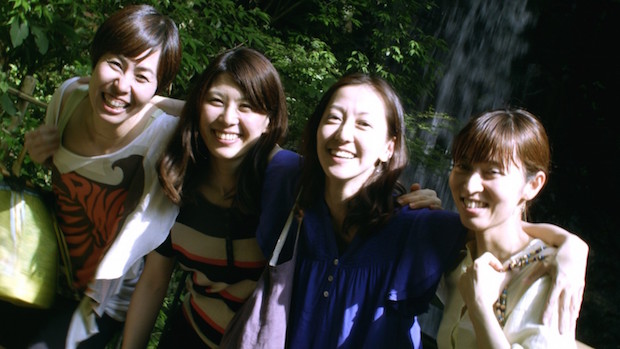 Bad news first: Happy Hour is pretty much a must-see. Given the option of watching 5+ hours on a weekend afternoon, I suspect most of us would rather not, but there are things it’s worth blowing your day up for. Ryûsuke Hamaguchi’s 317-minute drama is a mysterious movie that begins as one kind of straightforward film before mutating into something much stranger — discussing it thoroughly without spoiling it is tough. I’ll try.

Happy Hour initially presents itself as something like a shomin-geki, a term Wikipedia snippily notes is a “pseudo-Japanese word invented by Western film scholars”; Donald Richie defined it as “the drama about common people […] the kind of film many Japanese think of as being about ‘you and me.'” Think low-key family drama, day-to-day; think Ozu. The genre actually dates back to the days of silent film, but came to some kind of full definition with Tokyo Story and its famous climactic, smiling-through-the-tears delivery of “Isn’t life disappointing?” The foremost contemporary practitioner is probably Kore-eda Hirokazu, who repeatedly returns to this idiom in films like Still Walking and Nobody Knows, and the first 200 minutes of Happy Hour can feel like his work maximalized. After the intermission, all hell breaks loose, a left-turn that isn’t entirely unfamiliar; recall Kiyoshi Kurosawa’s Ozu-nodding Tokyo Sonata, which starts quotidian and normalized before losing its mind, or Katsuhito Ishii’s mondo-bizarro The Taste of Tea, which punctuates family drama with regular doses of Miike-nutsoid grotesquerie.

Happy Hour is closer in spirit to these films than Kore-eda, despite remaining fully realistic in its settings and characters. It should be noted that the first scene is pretty bad, with the kind of tackily placid score that inexplicably comes with the genre territory. Four friends ascend to a park’s peak for a picnic, their pleasure in a day outside marred by the fog around them; the line “this resembles our future” isn’t a subtle scene-setter. This four women seem like lifelong friends, but it’s hard to tell them apart when we’ve just met them and their behavior is all tuned in to the same scrupulously polite/mild wavelength and mode of expression.

The friends split, and we get to know them one by one. Sakurako (Kikuchi Hazuki) is the housewife who can’t schedule a group outing without making sure her mother-in-law (roosting indefinitely with the family) will cover her on meals; Fumi (Mihara Maiko) is an arts space manager/de facto publicist (non-profits are small!) who the narrative will take more than two hours to actually define. My favorite is Akari (Tanaka Sachie), a nurse who always knows what metaphorical time it is and tells others bluntly. The plot instigator is seemingly happily married Jun (Kawamura Rira), who will (relatively) quickly drop a bombshell: she’s getting a divorce.

Jun tells Sakurako, who struggles to keep the secret until the whole group knows. Meanwhile, the women attend a strange workshop at Fumi’s space led by Ukai (Shibata Shuhai), a conceptual artist of sorts who walks the meager attendees through exercises designed to center them in their bodies first physically, then metaphorically. It’s a strange sequence that goes on for a long time, like one of Rivette’s longer actors-rehearsing sequences but with no clear goal in sight; as various physical exercises go on, it’s easy to completely forget about Jun’s drama. (As the sun goes down, light stops streaming through the windows. Because these kinds of digital cameras can’t handle that, all the character eventually end up plunged into the kind of darkness that’s both aesthetically off-putting and completely unrelated to how anybody’s eyes actually work, which will be one of the defining visual features of this era. Anyway.)

Afterwards, Ukai and his friends join the ladies for dinner. It’s a boozy blast, with a long, fascinating rant from Akari about how science has prolonged our lives to an unnatural extent, resulting in dementia and nurses’ careers on the insurance-company line should their patients they wander off into traffic. The talk turns to divorce, and only then do we remember that Jun’s Got A Secret. The fact that she didn’t tell everyone helps isolate buried fractures within the group, whose various trajectories comprise the rest of the narrative.

Akari’s speech is epic, as is every sequence in this film, where we learn a lot about the daily and professional lives of all concerned in a way that most movies, out of necessity, compress and reduce. That Jun effectively disappears halfway through, L’avventura-style, is the first sign of a narrative perversity lurking beneath the seemingly benign surface. The second half kicks off with three positively soul-sucking sequences. First there’s the reading of a mediocre short story by a young author whose editor is Sakurako’s husband; to what extent she’s reading attraction into their relationship becomes increasingly important. The reading is succeeded by a Q&A sequence that will be excruciatingly familiar to anyone stupid enough to stick around after a screening to hear the audience’s bright thoughts, and then by a celebratory dinner in which simmering conflicts are finally articulated. This evening meal is a travesty of the first half’s exuberant meeting of the minds, but Akari’s not there; she’s at a grungy bar/club with Ukai, who moves from merely dickish to potentially violent and unstable in ways I shouldn’t spoil.

I’ll stop recapping here, except to note that I was shocked when we entered the club, which looks like any such establishment in Brooklyn (or anywhere, really): house music in the back, a small bar with a Red Bull case up front. This is not the kind of space you’d see in a Kore-eda movie, whose delicate spell would be broken by a reminder that somewhere people are behaving rudely and drunkenly, quite uninterested in quiet, everyday epiphanies. First Happy Hour excels in this area, then it blows it all up. About 15 minutes from the end, we’re abruptly narratively wrong-footed with what seems to be the death of a major character, only to be shown that it was the death of someone else entirely. This is a very strange time to start actively messing with viewers, and it made me feel like anything could happen — given another two hours, perhaps zombies would start roaming the planet and a meteor would wipe out mankind. Duration is a much-abused tool, but Hamaguchi earns every bit of his running time; if he decides to go Lav Diaz systematic with this, that would be fine by me.