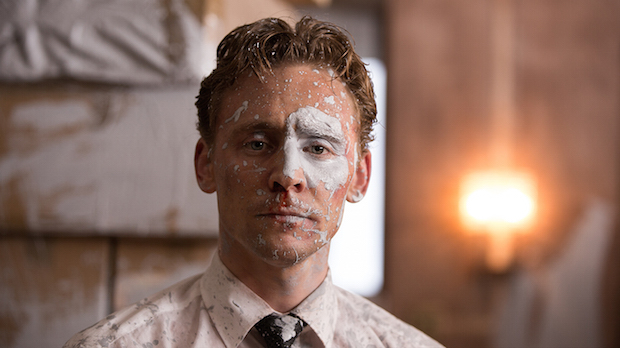 by Soheil Rezayazdi
in Cinematographers, Festivals & Events, Interviews
on Apr 20, 2016

Cinematographer Laurie Rose began his career as a feature film DP with Down Terrace, the debut film from British director Ben Wheatley. Rose has gone on to shoot all five of Wheatley’s features, including his latest, High-Rise. The first major adaptation of a J.G. Ballard novel since David Cronenberg’s Crash, High-Rise depicts a society in all-out decay. The film is set largely in a single apartment building, where tenants’ petty squabbles and decadent parties devolve into a hellish dystopian vision of mankind at its most feral. Below, Rose discusses his love of practical effects, his career with Wheatley, and how Andrew Bujalski’s Computer Chess inspired the film’s aesthetic. High-Rise will have its New York premiere at the Tribeca Film Festival this week.

Filmmaker: I imagine High-Rise represented an interesting challenge to film. Much of the building looks homogenous, but each floor is marked by the economic status of its tenants. How did you approach shooting the various levels of the building differently to give them each a distinctive look?

Rose: The homogeneity of the building was to our benefit in terms of physical build. The concrete buttressing was present throughout from the lobby to the penthouse, [which] gave us a real signature feel. The subtle interesting differences were done mainly with the dressing. We searched but the perfect building just didn’t exist anymore. We agreed that even if it did, the practicalities of filmmaking would have been prohibitively difficult.

So High-Rise I’d say was 95% built by production design. This was a new experience for me, getting involved in that process from the very beginning, where windows were and placing fixed practical lighting. One full apartment was built and redressed to represent four apartments on different floors and each floor had distinct differences based on status. We also dressed for the stages of breakdown.

The Wilders, Laing and Charlotte’s on 25 and 26, respectively, and Talbots. We did Talbot’s power-cut party last — and incidentally had to shoot the degraded version first. Because we got to it last we felt we’d seen the apartment before and that even a significant redress might not have given us enough variation. So we came up with the idea of flopping the whole apartment, supposing it could’ve been on an opposite corner of the high rise. We printed bottle labels in reverse and changed hair partings over, and we monitored a flopped image. It made the apartment feel completely different; I can recommend it as a device.

Filmmaker: One of the characters within the film, Richard Wilder, is making a documentary about the high rise. I’m curious how this footage was captured. Did you let Luke Evans run wild with a film camera?

Rose: Ben and I had seen an article about a film called Computer Chess, which had been shot entirely on period analogue video cameras. Wilder is a documentary filmmaker in the story, and so Ben went about finding period cameras on eBay, and some them even worked! We got a technician to adapt one of them with useable power and an output and the picture was just incredible — smeary, distorted, basically black and white. Luke got some cool footage from it but after some mishaps — it was a delicate and temperamental device — we ended up with a few precious shots, just enough to tell the story.

Filmmaker: The film has a pretty seamless mix of practical and CG effects. As a DP, which approach do you personally prefer when you’re working on a film?

Rose: I love practical effects, the kaleidoscope being the most notable in High-Rise. Without a real building we had studio balconies and a painted cyclorama for a skyline. We needed to develop a system to generate “silent wind” — to give the balcony some air movement when characters were outside. This consisted of a very long flexible pipe with a fan at one end. This meant we could record dialogue and have the merest hair movement, which is enough to sell the idea we are outside. We used some green screen if we ever broke the profile of the building but tried to limit that as the cost of making every shot towards a window a VFX job would quickly mount up — another reason why windows and exterior glass doors were always on a slightly different level, often above the eye-line.

The kaleidoscope was a practical effect that we could attach directly to the camera over a prime lens and hand crank. Having three clear, mirrored surfaces inside meant it would see all manner of unwanted things on set as it rotated — booms, track etc. — but the overall effect was magic. Not sure it would have had the same feel if you created it in post.

Filmmaker: You’ve shot all of Ben Wheatley’s feature films. Can you discuss your working relationship with Ben over the years, from Down Terrace in 2009 to the present?

Rose: Our relationship has been quite instinctive from the start, but as scripts and ideas get more sophisticated the prep gets more intense each time. Ben storyboards almost the entire film now as a way of conveying his visual ideas to lots of people and departments at once. This usually goes up on a wall; it can lead to thousands of frames. We go over this in finer and finer detail, plotting our approach in terms of camera style — handheld here, track there, Steadicam, cranes/top shots, etc. But ultimately it remains fairly instinctive. I can usually tell what he’s after. We like to keep some spontaneity for the shoot. When you’re in the actual space with the cast, the shots can present themselves — not always something you can or should plan for.

Filmmaker: High-Rise begins almost like one of those utopian promo videos you see for high-end apartment buildings. Of course, things get messy quick. What was your vision for managing that transition visually?

Rose: We knew it was quite a challenge to illustrate the breakdown of our society, but as is often the case we couldn’t shoot entirely in story order. So we agreed to a loose DEFCON-style system of degradation and power failure in about five stages, I think. We would try and stick to that scale as we bounced around the sets. From my point of view, it was whether it was day or night, or what level of power failure we were at during any one time. Power failure was quite a common occurrence in London in the ‘70s, so it wasn’t at all unusual for candles and lanterns to be on hand, which saved my life at times. We had some license with the idea of power failure within our building — it could potentially come and go at any time — but to positively sell the crumbling nature of the building it was a strong way of telling that part of the story.