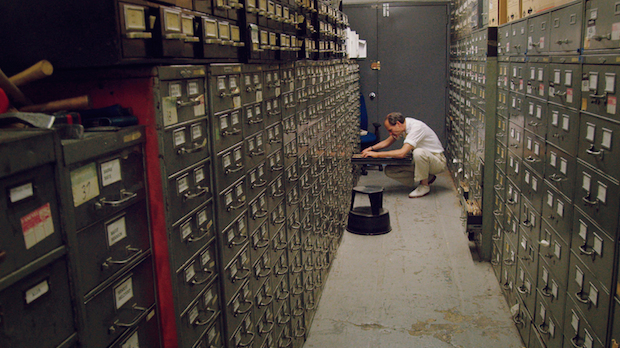 The day I sat down to write my second dispatch from Tribeca, Prince died. I took an hour to let the gut-punch settle. Most of us have that luxury, to just sit and sulk. Maybe we revisit an album or post a little thing on Facebook. We grieve that abstract grief over a person we never met. If you’re like me, you shut down and marinate in the art with a renewed appreciation.

The subjects of Obit have a much harder job. They only get a minute to mourn. After that, they set about a seemingly impossible task: to encapsulate a life in a few hundred words over a single afternoon. Obit, which made its world premiere at the Tribeca Film Festival last week, details the work of New York Times obituary writers. Had Prince died a few months prior, his death might have made the film. Bowie’s did. Far from morose, Vanessa Gould’s documentary is a profile of a fascinating profession and a handsome ode to life itself.

The film transpires as a behind-the-scenes portrait of the Times’ renowned obit desk. Gould interviews the writers who, five days a week, turn life’s raw data into coherent little stories we can read over a cup of coffee. As one of them says, “I show up in the morning and go, ‘Who’s dead?’” Gould’s camera hovers as reporters research, call relatives and pitch pieces to editors. She mixes the fly-on-the-wall work with abnormally eloquent interviews — these are Times writers, after all — and splashes of archival footage to take us outside the cubicles. As a masterstroke, we also meet Jeff Roth, an eccentric lone wolf who works in the Times’ archival stacks known as “the morgue.” Isolated from all of our other characters, he’s just the kind of bizarre personality that would get an obit in the Times.

Gould has made one of the few great films I’ve seen about writing. Sly and sprightly, Obit brings a visual energy to the act of white-collar workers typing on keyboards. She smartly sets the film within a single day. As such, the print deadlines and pitch sessions build tension as we follow the arc of an obit from “Who’s dead?” in the morning to the final product in the next day’s paper. We trace each step of the process in rigorous, satisfying detail.

I left the film without a single question about how this system works. We learn the granular details of the sudden-death obit (think: Prince), the anticipated obit (think: Kirk Douglas), and the obits of non-celebrities who have made history. For all its minutiae, though, the film doesn’t lose the larger picture of obituary writing: to make the dead live again. Obit teems with colorful anecdotes from the lives of Svetlana Peters, obscure NASA engineers and a dude who once rowed across the Atlantic Ocean for no reason. The film celebrates human achievement and human strangeness. It effuses an obit writer’s intellectual curiosity and itch for a good story.

Like Obit, Contemporary Color is a study of people at work. The film doesn’t just show us the final performances at Barclays; it revels in the months of practice, the anticipation, the greater context. The Rosses cross-cut between the concert footage and images of the teams in their high school gyms at practice. They also stage stylized sequences of the teenagers in their own spaces, outside the gym or the stadium. The film transcends the concert or dance doc formula. When the camera follows a trio of color guard performers backstage as they rush to catch a glimpse of Blood Orange’s set, we’re not really watching a concert or dance documentary anymore. We’re seeing a film about the passions of these teens.

These marginal touches add so much to the flavor of Contemporary Color. Consider, also, the cornball backstage announcer or the custom graphics for each color guard team. Both elements mimic the feel of a late ’70s NBA game, as the Rosses discussed recently with Filmmaker.

Of course no concert doc with David Byrne can avoid comparisons to Stop Making Sense, Jonathan Demme’s visionary Talking Heads film. I’m sure the Rosses know this, and they’ve made a film with as distinct a visual palette as that 1984 classic. The film employs slow psychedelic dissolves to give center stage to both the musicians and the color guard performers. We see the color guarders in wide shots overlaid with tighter images of St. Vincent and the other musicians. It’s a neat trick — it allows us to relish in both sets of performers at once, and it prevents the music scenes from feeling like indifferently shot concert footage.

Along with Stop Making Sense, Contemporary Color also recalls True Stories, the Byrne-directed musical oddity from 1986. Both films find Byrne fixated by Americana culture: the fashion, the malls, the highways. A color guard sequence would have blended right in with that earlier film. Byrne’s enthusiasm is, as always, infectious. He finds poetry in what others might dismiss as low-brow or mundane. Byrne is the perfect conduit to bring greater recognition to color guard. Like the performers themselves, he has the passion and sincerity of a teenager. Contemporary Color comes across as a big bear-hug from one generation of arty weirdos to another. Byrne, St. Vincent, Tune-Yards, and the other musicians have given legitimacy to the young color guarders. With the project and film, they say: Your self-expression is worth our time. Keep it up.

Tribeca 2016 has hosted a number of pleasures. I’ve seen Alfonso Cuarón and Emmanuel Lubezki chat like old chums. I’ve seen a vibrant adaptation of a vicious J.G. Ballard novel, a breezy take on a bizarre moment in American history, and a sports biopic that hits every cliché yet somehow still moves you. Contemporary Color and Obit, however, have left the greatest impression. Two exuberant docs on people developing a craft, the films speak to the limitless ways human beings have found to be interesting.