Vincent Lindon, Lea Seydoux in Diary of a Chambermaid

How to adapt a French epistolary novel relayed by a luscious servant from her point of view — itself a subversive proposition when it came out in 1900 — about the relationships she develops in assorted stately homes with both arrogant employers and beaten-down peers? To further complicate the project, how to insert into the mix a substantially larger contemporaneous issue: the shameful blemish on the national psyche that was the rabidly anti-Semitic Dreyfus affair? In the fourth movie version of libertarian author Octave Mirbeau’s groundbreaking Diary of a Chambermaid, director/co-screenwriter Benoît Jacquot has come up with some close-to-flawless strategies. 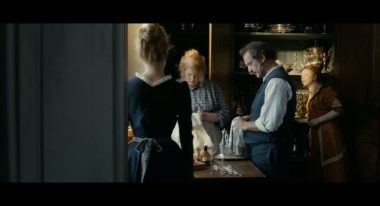 The formal analogue for the servant-master imbalance is precise, intuitive editing, arranging shots to convey a dreadfully boring sameness among the latter, but for the hapless drones, positioning them to foreground their distinctiveness. Each of the female attendants retains a sense of self in spite of the drudgery and denigration she endures over a six-day-plus work week. The sole respite is a relaxed Sunday gossip session in the basement of the local haberdasher/abortionist. A lovely, symmetrical god’s-eye-view held on these virtual inmates as they chirp warmly and fearlessly around a large circular table —egalitarianism at work—illustrates a supportive bond that is allowed such limited expression.

Wisely, Jacquot does not equate the pervasive social pathology with the indignities suffered at her stations by the chronicling protagonist, Celestine (subtle multitasker Léa Seydoux). Though they can’t help abutting at times, he more or less separates them. The consumer gets two books, or two films, for the price of one. The solution is…novel? Sorry ’bout the pun. The mutable present is indicated by sequences, a large portion of Celestine’s diary, which take place at the cheerless mansion of the miserable, childless Lanlaires (Hervé Pierre and a magnificent Clotilde Mollet), and in many of which the director’s M.O. is most apparent.

While surreptitiously inspecting the sleeping loft of Joseph (Vincent Lindon), the temporarily absent coachman, the chambermaid uncovers aggressively hateful publications about “Jewish vermin” and kikes. She does not bat an eye. Blasé and manipulative of proprietors with feigned politesse, she does not engage with anything vaguely political or cerebral. She refuses to dip her toes in such xenophobia, less from a moral position than from its plebeian association. No revolutionary, she.

Celestine is more taken with the accumulation of wealth and its trappings. She evaluates everything and everyone in economic terms. The woman is a relentless opportunist who sees herself as superior to her peers but has no intellectual or ideological understanding of the social matrix in which they and their bosses operate.

She is a chameleon, treading water during time served at the estates, failing to advance on the hierarchical ladder no matter how hard she climbs. Her feelings about small victories and defeats during encounters with her upper-class taskmasters remain internalized. The most visible commentaries, and the most acerbic, are the disdainful smirks and the smug sardonic smiles she displays when her exploiters are most ridiculous.

Her tongue, however, can be sharp, and she aims her defensive vindictiveness at those who attempt to curb her restless nature. In one contentious interview, she turns the tables on a haughty prospective employer. Celestine questions her habits (ironic, since almost all the women of the houses have asked her such tactless questions as “Are you clean?”), then offhandedly rates her, her lifestyle, and her residence unsuitable.

Joseph is the one person who intrigues her. He carries the full burden of the secondary narrative, which chillingly touches on the epidemic of bigotry. This grizzled man is an unapologetic peasant, and such a passionate anti-Dreyfusard he dreams of going to Paris to disembowel every Jew. Insistent in his vulgarity, he is comfortable with his status as a cipher in a rigid caste system he detests. The more obstacles Celestine faces, and they are as alike at all the estates as the privileged elite who dwell inside, the more rapidly she acquiesces to the demands of social stratification. He embraces what she has denied, but which ultimately surfaces: textbook return of the repressed.

Her interest in Joseph turns sexual. No matter that he has few communication skills. It’s of no importance that he reciprocates her attraction by sneaking intense stares in church, dining room, and garden. His vileness and transgressive activities become pheromones that fuel her attraction toward him and an attainable lifestyle by his side. No longer would she need to keep up a façade mimicking the higher-ups, a delusional ploy she had hoped would elevate her standing.

In book and movie, Liberté, égalité, fraternité proves to be an empty jingoistic abstraction. Jacquot translates the contradictions charted by Celestine, which she articulates directly or in voiceover, into appropriate cinematic form.

Example: In the film, Mme. Lanlaire’s sterile provincial home is inherently dull, static, its atmosphere deadly. After all, everything is locked up, or obsessively placed. The silver warrants more attention than her spouse. We usually see her in a chair, immobile and enervated, and we hear her communicating less with words than with a degrading tinkling bell.

Jacquot, however, keeps the film fluid and dynamic. He mounts scenes in which Celestine races up and down the stairs chore to chore, sweating, nearly fainting, trying to fulfill the sadistic orders of her gloating boss. Her loss, however, is the movie’s gain. She can barely breathe, but the film begins to. The movement unleashes an expansive energy, which he harnesses and channels.

There are no forced segues. The prime mover for transmitting the book’s rather avant-garde temporal fragmentation is montage, especially flashbacks and flash-forwards. Jacquot will end a sequence about one household with a slow fade to white, then follow it with scenes from a different location which had taken place earlier or would occur later. In spite of the zigzag structure, well calibrated ellipses uphold credible narrative order. 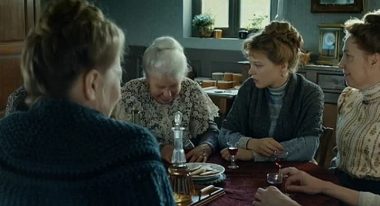 The soundtrack functions in similar fashion. It is comprised of a variety of musical styles and genres — atonal, grand classical — that are harmonious while at the same time subliminally evoking chaos. Take the composition over the end credits. The music swells, shifts into low-volume softness, then the pattern repeats itself. We’ve already seen such redundancy: the nondescript similarities of the egregious landowners, for example.

A series of adjustable tableaus, the film enables reversals (such as a major transformation in Celestine’s relationship with Mme. Lanlaire) and digressions, like the teary account by chubby colleague Marianne (Melodie Valemberg) of her sorrowful history of loss and humiliation.

Anchoring the peripatetic protagonist’s circuitous path is a significant structuring element: a small employment office in a mid-sized city to which she returns after each of her unsatisfying engagements. Celestine’s trips remind us that the story had begun there, the perceptive proprietress (Dominique Reymond) telling her straight out that a willingness to engage in misconduct is a prerequisite for a half-decent post (if any actually merit such a characterization).

Jacquot is a stylist par excellence. His mise-en-scene is rich and elegant. He creates marvelous effects with lighting, frequently sourced by gas lamps, candelabras, and single candles — hardly in abundance but sufficient to obliquely add to our knowledge of the characters and their behavior. There’s the zoom, which he has appropriated from the French New Wave after it made passe the screenwriter-oriented “Cinema of Quality,” blasted by Truffaut and others at Cahiers du Cinema in the early ’50s. In addition, he gracefully reframes within single shots, favoring spatially contiguous two-shots over the more conventional shot/reverse shot — a splendid balance for the non-linear editing. 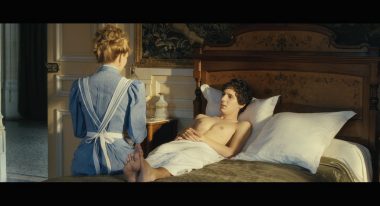 The wealthy ladies who toss off sadistic directives in their homes and the parasitic placement counselor are not the only women willing to gain from a sister’s misfortune. The matron who offers her choice domestic positions isn’t a madam, but Elvira Parsi (the great veteran Italian actress Adriana Asti) is. An ancient aggressor with heavy face paint on the prowl, she cozies up to Celestine on the street and invites her to a posh café to lure her into a profession guaranteed to line her own coffers.

Compared to these greedy matriarchs and faux-mentors, the immature, lecherous men who are willing to cheat freely on their wives with the young staffers are not seriously threatening. Terrified of his shrewish wife, sneaky M. Lanlaire makes cowardly overtures toward Celestine. The Captain (Patrick d’Assumçao, who munches the scenery shamelessly), his neighbor and nemesis, and one of many leeches on our heroine, is an extroverted buffoon whose bizarre comic persona masks his callousness toward Rose (Rosette), his devoted chambermaid and Celestine’s best friend. In this milieu, loyalty of any sort is as rare as marital fidelity.

Examining sexual practice was one of Mirbeau’s specialties. The topic of lovemaking has long been second nature to Jacquot, whose works feature the hottest French starlets. A perfect match. Icons Renoir and Bunuel directed earlier incarnations of Diary, but this most recent one holds its own in comparison. Truest of all to the novel, it benefits from extra kink the filmmaker slathers on.

All versions favor the powerless. The auteurs do not judge them for the nefarious means they sometimes deploy to make their wretched lot more bearable. And the masters? They are reduced to being unimaginative hypocrites who play just enough by some arbitrary rules to maintain places in an absurd social structure on the verge of collapse.