“Black Lives Have Always Mattered”: John Singleton on Boyz n the Hood at 25 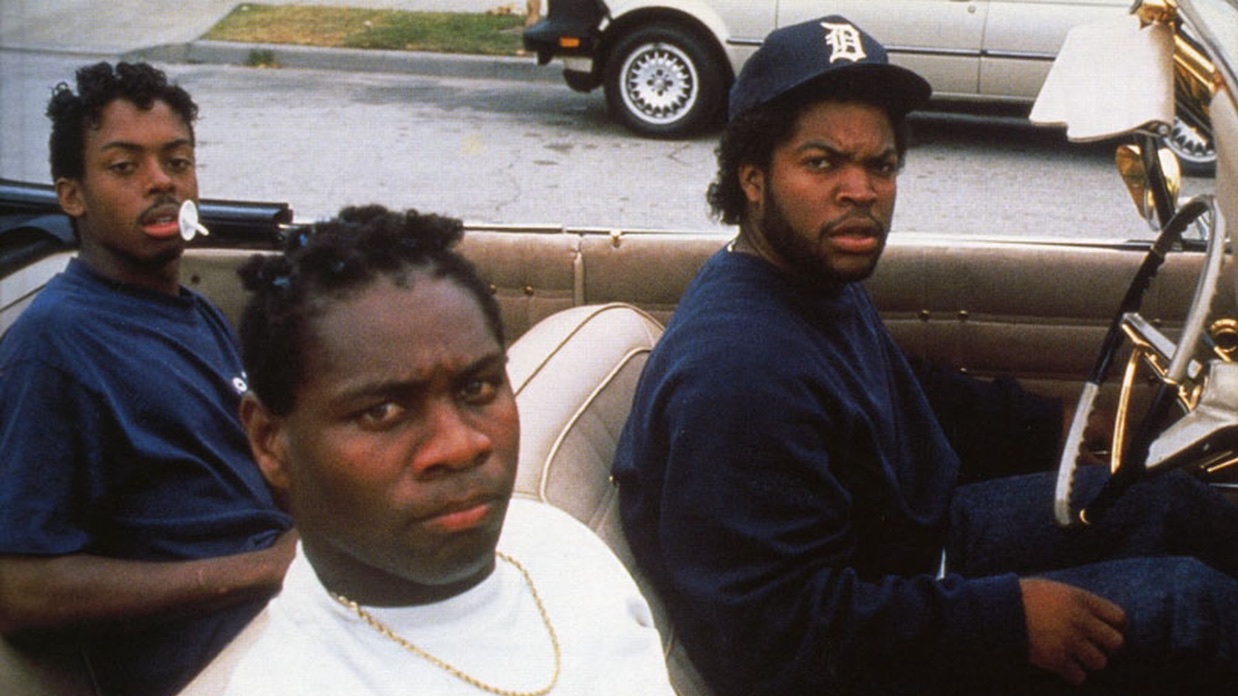 Originally published on June 13, 2016, the following report of John Singleton’s Q&A with Walter Mosley preceding the 25th anniversary release of the director’s Boyz in the Hood is being reposted today alongside the tremendously sad news that Singleton passed away in Los Angeles following a stroke. Made when he was only 24-years-old, Boyz in the Hood — tough, indelible, richly observed and disarmingly sensitive — was a landmark work that garnered Singleton a Best Director Oscar nomination. (As Ashley Clark notes in his intro below, he became the first African-American and youngest person to be nominated for this award.) What followed was a diverse career as both director and producer — in addition to his own films, such as Shaft, he produced Craig Brewer’s first two features, Hustle and Flow and Black Snake Moan and executive produced Thomas Allen Harris’s Through a Lens Darkly: Black Photographers and the Emergence of a People — and working across franchise blockbusters as well as independent documentaries. Singleton passed away far too young at 51, and we extend our condolences to his family, friends and colleagues. — Editor

July 12, 2016 marks the 25th anniversary of the American theatrical release of Boyz N The Hood, John Singleton’s debut as writer-director. This powerful drama, set in crime-riddled South Central L.A., became a benchmark for a new wave of black American cinema in the early 1990s and, in addition to boasting commanding turns from Laurence Fishburne and Angela Bassett, helped to launch the screen careers of a remarkable constellation of talent, including Cuba Gooding Jr., Ice Cube, Nia Long, Morris Chestnut, and Regina King.

The film was both a critical and commercial success, and 24-year-old Singleton became both the first African-American and the youngest person ever to be nominated for the Best Director Oscar. In 2002, the film was selected for preservation in the National Film Registry. Singleton, whose subsequent films include Poetic Justice, Rosewood and 2 Fast 2 Furious, has some tantalizing prospects on the horizon. They include the 1980s L.A. cocaine epidemic drama Snowfall (for FX), and the two-hour detective drama pilot, Rebel, which, in Singleton’s words, is like “Shaft with a sista — she’s a human tornado”.

Following a commemorative screening of the film at New York’s SVA Theater on Sunday 12 June as part of the Academy of Motion Picture Arts & Sciences 25th Anniversary celebration, Singleton sat for a Q&A with author Walter Mosley, whose latest Easy Rawlins novel, Charcoal Joe, is released imminently. Filmmaker Magazine was on hand to capture the highlights.

On writing Boyz N The Hood, and his days as a USC film student

“I look at it as a time-capsule of what I was thinking and feeling at the time. I wrote the script when I was 20 years old. I went and saw Do The Right Thing in the summer of 1989, I came of the theater, and I was so enamored of Spike Lee, he was like my cinematic big brother. I’d met him two weeks before I started USC film school, when he came out with She’s Gotta Have It in 1986. I saw him in L.A. He moved people out of the way and he shook my hand. I told him, ‘I’m going to USC in two weeks: watch out for me.’ I went to school for four years repping black cinema. I was one of the only black filmmaking students in a predominantly white film culture. There was continuing marginalization: ‘Oh, there’s only going to be one Spike Lee,’ and that kind of thing. But I was like, ‘I’m the next John Singleton, I’m not the next Spike Lee.’ My thing was, ‘I’m going to get out of school and be a first-round draft pick, just like in the NBA or NFL, but in film: I’m gonna come hard.’ So the question was how to do that? Coming after Do The Right Thing, something clicked. In any type of writing program, they say to write about what you know. When you’re a certain age you only have a limited amount of life experience. I only knew about what I saw growing up in the hood, so I went and hung out with my folks on Vermont Avenue and decided to figure out this story. That’s where this came from: me trying to make an identity for myself as a filmmaker repping Los Angeles, and using a certain part of L.A. as an identity.”

On the importance of cultural specificity

“If no one’s giving their voices, then it’s almost as if they’ve never existed. [Thinking] back to film school, when I was awake in my international cinema classes—watching The Bicycle Thieves, and Rome, Open City, those post-World War Two Italian films, and seeing how [later] filmmakers like Scorsese and Coppola were very influenced by those films, but were very culturally specific in their Italian-ness — that’s what I wanted: black cinema, where, as a viewer, if you weren’t part of a certain cultural thing, some of the jokes you might not get, but on a human level you will understand what these people are going through. That’s what I was trying to do with Boyz N The Hood, and that’s what I try to do with a lot of my work over the years. It’s very difficult to do that within a system that continually tries to marginalize artists of color. The whole idea is to get it out to as many people as possible. I always say: ‘If I was a musician, and I was making funk, or rap, or whatever, we wouldn’t be having this conversation, because everybody would dance to my shit.’ That’s what I try to do in terms of the media.”

On communicating with wide audiences

“I’ve always wanted to be the kind of storyteller that’s accessible to folks. My office in L.A. is on 43rd and Crenshaw, and I go out to Leimert Park, and there’s always people who’ve just been released, people who are schizophrenic. You got people going from halfway house to halfway house. But when you’re in and around folks, you get stories. Everybody has a story to tell, but not everybody has the wherewithal to tell it. Not everybody can sit down and write it, damn near write a movie about it. I feel like I’m a conduit for those folks. I’m not so visible that I’m inaccessible. I do the celebrity thing on occasion. But I look at it like Ernest Hemingway: he would travel to different places, and he would write about his experiences. I love being able to do that, and listen to people — just real talk. That’s why I get the cadence and the rhythm of language, and I store it away. When I’m trying to do a story I don’t over-intellectualize things. You gotta feel it.”

On the state of African-American film today

“It’s dismal, abysmal. It doesn’t matter how many hits and how much money the pictures are making, I don’t think they have any cultural consciousness — well, there are smatterings here and there. Not every movie has to make a statement — my movies don’t have to preach, they are entertainment first and foremost. But if the films have cultural weight, then they will be entertaining. I don’t want to denigrate anybody else. I still try to rep hard for what Spike was doing when he was starting: he was trying to say, ‘Listen, we can have our own idiom in film. We can have a black film aesthetic, a thing that is unique: black American cinema.’

On the state of contemporary American cinema in general

“American films are not like films that are made in international cinema, where you have various sources [of funding], or governments that give artists free rein to have dissenting views. Our film culture is all based on commerce. The film has to make money and deliver. So, you have a paucity of personal voices in film — a true paucity. Yes, you have a lot of independent films that are still being made, but they’re not what they were. You don’t have that many iconoclastic, true voices that are different from the norm. You have that at a lower level with people making films on their iPhones, but there used to be a time when you had a support network, not just in black cinema, but in different cultures for these iconoclastic, specific films in different genres. You really don’t have that with the studios right now. That’s why American film is really suffering, because it’s almost as if that stuff is the farm team for the big films. As an example: if George Lucas didn’t make American Graffiti, you wouldn’t have Star Wars. American Graffiti is very specific to a certain time and place that was changing and evolving: the late 1950s and early ’60s. You could never make that now. You could never make Boyz N The Hood now.”

On Tupac Shakur, who was slated to play the lead in Singleton’s Higher Learning, a part that was eventually played by Omar Epps

“The last conversation I had with ‘Pac, he was making the video for To Live and Die in L.A.. I hadn’t seen him since he got out [of jail]. We were supposed to have lunch before that, and I’d said to him, ‘Man, this script is gonna get you an Oscar,’ and then [he was jailed]. Then, I was so devastated when he passed [aged 25, in 1996] that I went to Africa. I went to Senegal. I hung out with this kid, he was like 16 or 17, and didn’t speak any French, he only spoke Wolof. We used to go swimming every day. He used to take a plank of wood [for a surfboard] and go out into the Atlantic Ocean. He’d dive down, but I wouldn’t go as far as him, and he’d spear fish. He was into Francophone hip-hop. I gave him the copy of Source magazine, and in broken Wolof, I asked him if he knew about Tupac, and that he had passed. As a testament to Tupac’s power, this kid was crying; he didn’t know. He was broken that Pac was gone.

“Tupac wasn’t totally aware of what gifts he had. Who knows if he was going to evolve and become a true leader, but he had that potential. I think that’s why he’s not with us anymore. He was a 21, 22-year-old kid who blasted on TV about everything that was going wrong in this country, socially and multi-ethnically. He was holding hard for black people and human rights. He’s from that generation that said, ‘We don’t want any type of Black Messiah, we got to quell that.'”


“It’s not even about a time-frame thing, it’s about how that ideology is propagated in the media. Hip-hop became prominent for people whose parents came up in the civil rights movement. You had Tupac but you also had Public Enemy, the Native Tongues movement. Then hip-hop was appropriated as a corporate thing and made lots of money. But music is a cathartic thing and hopefully [#BlackLivesMatter] will have a voice. Not just in music but in various forms, in film and TV. Images are so, so, so powerful. You can have an image that goes up on a certain thing and it will be more damaging than something in the physical world. I’m hoping that the #BlackLivesMatter thing is not a fad because black lives have always mattered.”

“A buddy of mine and I, we have a private joke. When we were making Higher Learning, he brought his six-year-old daughter to the set. He said, ‘She has a question to ask you.’ I said, ‘What is it honey?’ She said, ‘In your movie, do the black people win?’ I leaned down to her and said, ‘In my movies, the black people always win.’”