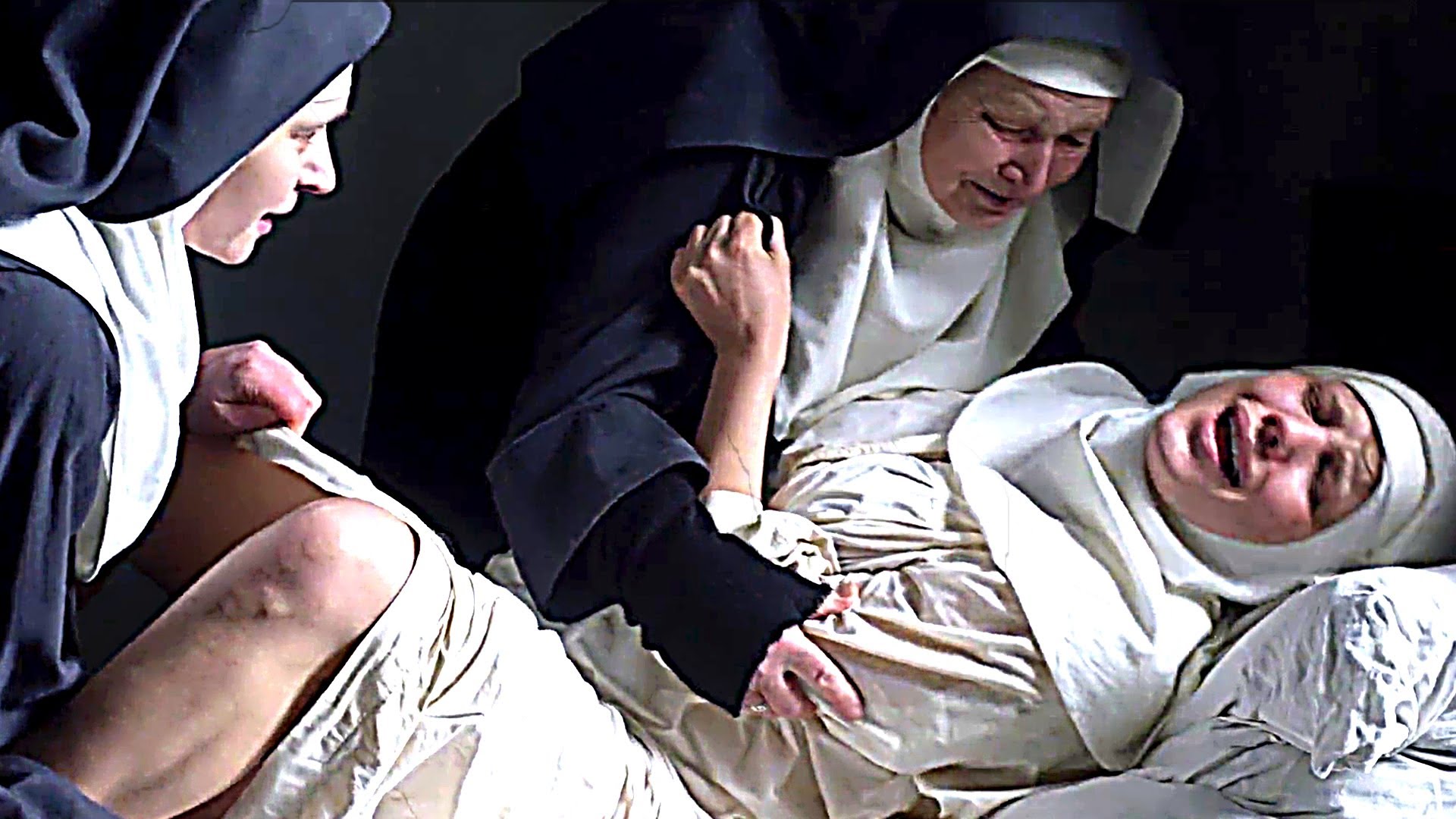 Determinism or free will? I’m flummoxed. This is my second successive review of a film about nuns. The first was Zach Clark’s Little Sister, in which meek ex-goth Colleen Lunsford (Addison Timlin) is a novice in a New York City convent whose mother superior, like the newcomer herself, doubts the young woman’s faith and commitment to the order of the Sisters of Mercy. During a trip to the family home in North Carolina — half therapy, half reunion with a brother mutilated from combat — she appropriates the flamboyance and kitsch that had been a substantial part of their youth.

A nun’s life choices and penguin-like clothing have often been the butt of camp humor. Halloween and costume parties often have several in attendance, some sporting facial hair. The real things are collective foils, their perceived commonality intrinsic to other, non-comic stereotypes — like the ones at play in French director Anne Fontaine’s superb The Innocents, the subject of this second critique. 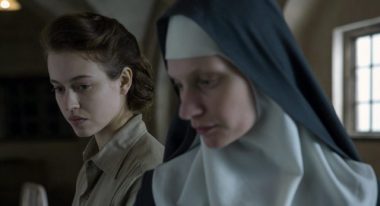 In this case, the nuns, osoby, in an isolated Polish Benedictine convent at the close of World War Two are unlikely objects of sacrilegious jokes. They are sober, obedient women desperately trying to hold on to their faith after enduring mass rapes and numerous impregnations by incoming Russian soldiers who quickly replaced the German occupiers. Fontaine probes, reaching beyond their nearly identical black habits and shared routines to uncover distinctive characteristics. For example, each of the women, who have vowed chastity but are in a family way against their will, reacts with marked difference to the condition, treatment, labor, and, ultimately, the child itself.

What sets these damaged women apart from the larger society outside their strict rule-bound world of devotion are unencouraged brushes with secularism, both vulgar, i.e., the bestial grunts who considered Polish women their prizes after their military victory, and innocuous, sometimes courageous. Among the latter are acts that raise the roadblock granting access on a two-way street of reciprocity. French Red Cross doctor Madeleine Pauliac fell into the latter category, in spades. The Innocents recounts only a small portion of her heroic life, tragically cut short in an accident right after the war. In Poland, she aided, often saved, all kinds of women who had suffered collective rape — in convents and maternity wards — as well as individual violation. 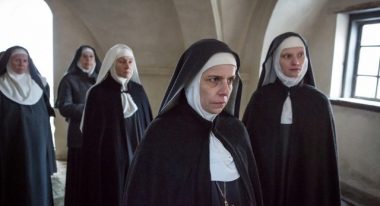 Illustrating the secular-versus-spiritual dynamic at its most original and creatively intricate is a scene in which the one nun with a past, French-speaking Sister Maria (Agata Buzek) — the gentle second-in-command to the order’s abbess, the siostra przelozona, whose rigid reign is frightening — gives the print dress she wore the day she entered the convent to a beautiful young French Red Cross doctor, Mathilde (an excellent Lou de Laage). Mathilde, based on Pauliac, needs a change of clothes to maintain her cover while she singlehandedly, against military regulations (her assignment is to aid only French victims of the war), attends daily to these so-called “brides of Christ.” Sister Maria’s nostalgia is palpable as she unpacks the lovely outfit and recalls her earlier life to the physician, with whom she forms a strong bond. The material item returns to the secular world after several years of incubation in a sacred place.

More is happening here than meets the eye. Mathilde has been decked out in drab military pants and jacket, her hair pulled back tightly. You get the feeling that Sister Maria is sharing a palatable femininity — less that which emerges when the order’s members walk in single file, white wimples snugly attached to shoulders and necks, black habits flowing effortlessly against the building’s crumbling, light-colored plaster façade; or sit in horizontal rows in the chapel, chanting chorales in perfect harmony — than a surprisingly secular expression of womanhood, an offering from a nun so appreciative of the outsider’s charitable work that she presents it in a way to which both can relate.

The dress’s transitional role in Sister Maria’s life adds both an intimacy and a recognition of overlapping values in spite of their opposing philosophical takes on life. The gift is heartfelt. Communist and atheist Mathilde’s decision to risk her career and her life for the well-being of the righteous Poles with whom she cannot even communicate — she subscribes to the secular Socialist ideal of a better world — echoes the leap of faith that Sister Maria completed when she committed herself to the insular spiritual domain. To be sure, this nun was no pushover. “24 hours of doubt and one minute of hope,” she says of her devotion.

Neither Fontaine nor DP Caroline Champetier tries to impose a design alien to the Benedictine belief system to circumscribe the deceptively complex lives of these women and the horrid acts that have provoked a questioning of faith. The artists respectfully let the nuns lead the way; the camera discreetly follows them with subtle tilts and pans. A graceful symmetry prevails.

Tracking shots of the sisters are smooth, the camera occasionally pausing for a two-shot of an iconographic bust and the face of pious Sister Maria or the more earthbound Mathilde, or at times just of the visages of the two. These profound still lives owe much to Bergmanesque arrangements in films like Persona but go further: They invite spectators to meditate upon their juxtapositions, to have at their disposal concrete images to use in tackling difficult, abstract metaphysical issues.

The shapes of the cross and the gothic arch are essential for translating the spiritual into something comprehensible to humans. Sculpted crucifixes outdoors, in the snowy forest that abuts the convent, end up being mixed-signal signifiers, while wooden ones adorning interior walls, like décor that has been blessed, are there to provide comfort.

At the end of the day, however, the cross exists more in the mind, a spatial entity realized verbally. “Behind all joy lies the cross,” Sister Maria tells Mathilde. “Help me bear this heavy cross,” says the abbess (Agata Kulesza, the Stalinist aunt in Ida and one of the finest actors working in cinema today), whose questionable actions during and after the impregnation crisis can’t help but gnaw at her conscience.

The arch is less burdened by dogma. As an architectural element — windows in two dimensions, vaulted ceilings in three — it surpasses the rounded Romanesque arch of an earlier time in height and capacity for structural support. Of course, it is a metaphor for aspiration. Increased verticality gets you closer to God.

Mathilde is at the center of the story; in fact, the film is presented entirely from her point of view. It is not easy to create, or in this case redefine, an ordinary mortal. But this nonbeliever from the working class with her own moral sensibility is special, a woman who alone services other females who have the same religion-based value system. They have taken the veil instead of Mathilde’s choices of the material and the male. A quick thinker, she comes up with imaginative false solutions to precarious situations, such as a potential follow-up attack by the Russians or what to do with unwanted babies. 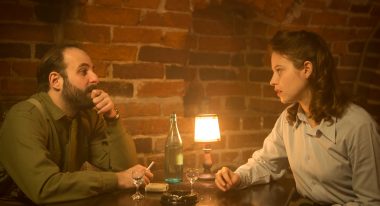 Like a devout Buddhist, Mathilde prizes the ethics of the day-to-day, especially regarding the treatment of others. She had become a doctor after volunteering to carry the wounded on stretchers in wartime Paris. She is the most sympathetic of her colleagues toward the homeless urchins who sleep at the entrance of the Red Cross office. And it is she who takes action when a distressed nun from the convent, who is also bypassing the rules to which she is bound, begs and prays for medical attention for a sister undergoing a cruel, hush-hush labor.

Mathilde is the only female who engages in any activity that could be considered playful, like trips to the local café for drinks and music, followed by casual sex, with Samuel (Vincent Macaigne, outstanding), the older Jewish doctor for whom she serves as an overqualified operating assistant. (Quick digression: She is in charge only when she begins to work the all-female convent.) The infrequent visits to the café, where tablecloths are checkered and polkas played on the accordion, do provide welcome relief from the surrounding grimness. These are among the few scenes in which Mathilde literally lets her hair down, the butch military style giving way to a sensuous ‘do, but they are also well timed ruptures in the narrative that help maintain a consistent rhythm.

The development of the characters of the anachronistic, middle-aged abbess and most of the seven expectant nuns is a study in authoritarianism versus empowerment, an exercise in extreme yin and yang that is as relevant today as it was in 1945. Fontaine views the girls on a case-by-case basis, documenting their different reactions to the dilemma at hand and the actions that follow. One girl is full of warmth and love, another in almost pathological denial. As a group, however, they are a three-dimensional construct.

The abbess, on the other hand, lacks depth. So literal is she in interpreting dogma, so overprotective of the order’s stature, that she thinks with the narrowest of templates, in the process lying and endangering the women in her charge. Their recent sojourn in hell does not factor in to her non-negotiable decisions. Such extreme behavior is not unlike some of the arrogant, selfish actions we associate today with fundamentalism at its most twisted.

Samuel occupies an important place in the narrative, especially in the elaboration of difference between Sister Maria and Mathilde. An intellectual born into privilege, he is by nature a sarcastic, funny cynic. His negativity has become so exacerbated by the loss of both his parents at Bergen-Belsen that he can not believe in anything. He functions as Point Zero in the friendly rivalry between the two women in matters of faith. Through the passive-aggressive Samuel and Macaigne’s extraordinary performance, the film finds a clever, unforced way to include the oft-addressed horrors suffered in Poland by the Jews.

Fontaine and veteran screenwriter Pascal Bonitzer have written a methodical script in which nothing is accidental; events are signaled by the slightest, most delicate images. For example, the placement of the street kids at the very beginning of the film plants the seed for the revelation of newborns at the convent. Or, on one of the evenings Samuel spends with Mathilde at the café, the self-pitying fellow cheapens their relationship when he asks if she thinks they will recall each other in the future only with post cards. The comment lays the groundwork for a conclusion–all right, a post card is one of many elements involved–that might point to a ray of light following all the grotesqueness, but could also be construed as yet another chapter of darkness. Such ambiguity is appropriate for a film set at the end of a world war, but at the beginning of another: the Cold War. The Innocents is that rare picture that captures the weight of history without losing sight of the individuals who live it.