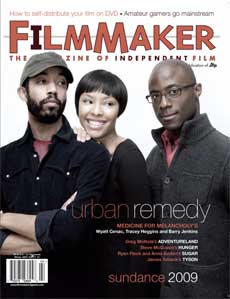 Just out from A24 is this trailer for one of our most highly anticipated films of the fall, Barry Jenkins’s Moonlight. Long time Filmmaker readers will remember that it’s been a while since Jenkins, a 2008 25 New Face and the cover of our Winter, 2009 issue for his debut feature, Medicine for Melancholy, has made a movie. He’s been among the most talented American independents to have such a long break before teeing up for his sophomore film, but it’s certainly not for lack of trying, as Jenkins has developed several powerful projects over the years. (Read this short interview with Jenkins by Esther Robinson about the jobs he took while trying to get his movies made.) That’s why it’s so thrilling to see this trailer; judged solely on the film’s emotionally-attuned storyline (an African-American youth’s journey to adulthood, traversing crime, family dysfunction and acceptance of his sexual identity) and the images herein, it’s clear that Jenkins is swinging for the fences with this ambitious picture. Three actors play the main character at different stages of his life, and cinematographer James Laxton’s images are suffused with beauty and longing. The film is due out this Fall.