Should Documentary Films Have Footnotes? 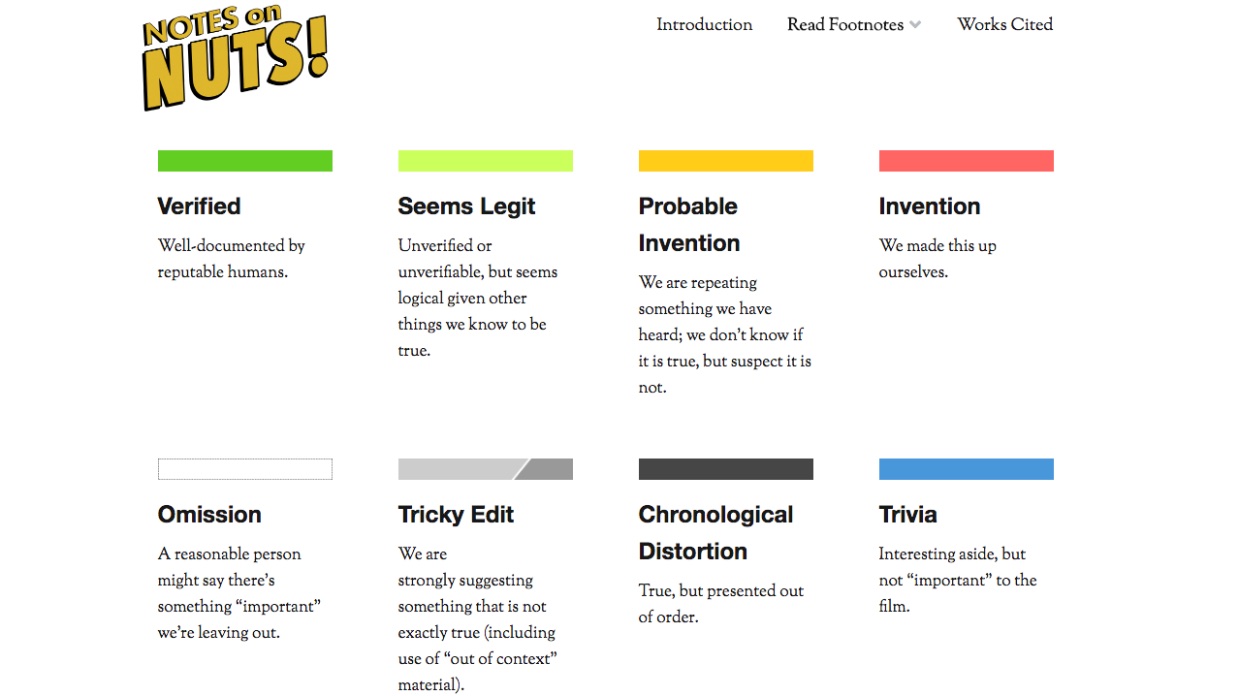 Part I: Notes on the Footnote

“Woe to details! Posterity neglects them all; they are a kind of vermin that undermines large works.” –Voltaire

About a year or so ago I began to think about footnotes.

First I wondered if I should write footnotes for the film (NUTS!) I was in the final stages of completing. Then I wondered if footnotes might be useful to the field of nonfiction cinema more generally. What purposes might such a practice serve?

This question excited me tremendously. It felt unmistakably like an idea whose time had come. I started blabbing ignorantly about footnotes to anyone who would listen. This is how I begin any new research project, because other people always have great ideas for how to proceed.

Dan Bouk, a brilliant historian and colleague of mine at Colgate University, suggested I read Anthony Grafton’s book The Footnote: A Curious History. In this ingenious little book of historiography, Grafton argues that the advent of modern citation practices — dating more or less to the Enlightenment — marks a pivotal point in the historian’s discipline. By providing readers with citations for various claims made, the historian now shows her work, so to speak. She invites the reader to engage in a critical conversation, not a monologue. Grafton believes it is the footnote which creates history as we know it today:

The radical nature of the shift from providing a continuous narrative to producing a text that one has annotated oneself seems clear. Once the historian writes with footnotes, historical narrative tells a distinctly modern, double story. Traditional political historians, in the ancient world and in the Renaissance, wrote from within a rhetorical tradition, as statesman or generals addressing their peers. The histories they produced reflected far more interest in virtue and vice then in sources and dating. Their works claimed universal validity; they eloquently described examples of good and evil, prudent and imprudent speech and action, that would provide moral and political lessons valid in all times and places.

Modern historians, by contrast, make clear the limitations of their own theses even as they try to back them up. The footnotes form a secondary story, which movies with but differs sharply from the primary one. In documenting the thought and research that underpin the narrative above them, footnotes prove that it is a historically contingent product, dependent on the forms of research, opportunities, and states of particular questions that existed when the historian went to work. Like an engineer’s diagram of a splendid building, the footnote reveals the occasionally crude braces, the unavoidable weak points, and the hidden stresses that an elevation of the façade would conceal.

So according to him, it’s the footnote — this lowly technical little thing — that transforms the historian’s craft from one centered on eloquence of narrative to a critical discipline. The best historians are still great storytellers, but the stories they tell are distinctively postmodern (if they’re annotated, anyway).

I thought if I could provide my viewers with footnotes, maybe I could make interesting headway in a significant ethical debate around truth and manipulation in documentary.

In “Honest Truths: Documentary Filmmakers on Ethical Challenges in Their Work,” an excellent report put out by the Center for Social Media, a sample of 45 filmmakers expressed daily frustration at the lack of standards and clarity on common ethical practices in documentary (outside of those that come from specific institutional frameworks). In the same report, filmmakers reported that they “accepted significant manipulation of the situation… without regarding it as a betrayal of viewer expectations.” This comes as no surprise to anyone who’s ever structured a nonfiction story.

Because, duh: I love stories and want to tell good ones. I don’t think we can live as human beings or understand the world without stories. Maybe footnotes would allow me to confess my documentary sins, to show the “occasionally crude braces,” “unavoidable weak points” and “hidden stresses” hiding behind the edifice of my story.

For various reasons I have explained in other places, NUTS! — which, just by the way, is available worldwide on iTunes, Amazon, Google Play, Vimeo On-Demand, Vudu and BitTorrent Now — is especially well-suited to footnotes. The reason, in brief, is that it is a lot… truthier than most docs. And so I did feel a special ethical tug to tell people what parts of the film are true, or false, or bullshit, and so on.

And anyway, I’ve always been more interested in historiography than history. Stories about stories, always.

“Having to read footnotes resembles having to go downstairs and answer the door whilst in the midst of making love.” –Noel Coward

As high-minded as my ambitions were, actually making the footnotes was a ridiculous effort. Documentary wizard and True/False co-founder Paul Sturtz invited me to present a live demonstration of the footnotes at Wind-Up Fest, an incredibly special weekend and a highlight of 2015. Without that deadline, and the concurrent fears of public humiliation and letting Paul down, I very well may have abandoned the whole idiotic idea.

The interface was a problem. I tried a lot of different things, most of them stupid. I tried to design something that would be embedded into a video player, but what I had in mind was too wordy for a video screen and I didn’t want the experience of reading the footnotes to be tied to the timeline structure. Various people said the words “second screen experience” to me — I think this means, like… an app? — but I did not want viewers of my film to be half-watching my film while they looked at their phone. They’ll do that anyway; I do not need to encourage it.

No, I wanted you to watch the film and then later revisit it by reading some or all of footnotes. I realized I wanted not an interactive art experience but an appendix. (Appendix, from the Latin: “an addition, continuation, something attached.”) Maybe it should just be a book? That might make a nice expanded DVD package. But I wanted the information to be readily available to anyone who wanted it — through a Google search, say.

This debate went on for months, with lots of very smart friends weighing in on various technologies I might want to use. In the end I went with a database: a standalone website available for free on the ol’ world wide web. It made it easy to allow others to add their own comments to the notes; maybe someone will take issue with my choices publicly, or add some background information I didn’t have myself. I really liked how the database structure asked me to think systematically, even taxonomically, about what I was doing: keywords, truth values, etc.

I eventually settled on eight “truth values” seen in the photo above; each footnote is tagged with at least one.

But beyond the technological and presentation issues, more than once I lost track of the purpose of the project. I meandered about various purposes footnotes might serve. Was I trying to:

Fact-check my own film?
Provide sources for archival imagery?
Confess choices I made in service of story over truth?
Tell a story about telling the story of the film?

In the end, I did a little bit of all of those things, and probably not quite enough of any of them. I am neither bragging nor complaining when I say this project took up hundreds upon hundreds of hours of my time, as well as the time of my research assistant Gin Moore, my producer Caitlin Mae Burke, and the website designer Dave Merson-Hess. All of whom are heroes who put up with things like me falling to the ground, dramatically wailing, “The footnotes… they’re just another way to tell a fucking story!”

This last bit — the dramatic wailing — was about me confronting the epistemic limitations of my Big Idea: writing the footnotes was actually just like writing any other nonfiction text, albeit a pretty po-mo one. The process of choosing which footnotes to write, which to not write, and what to actually write in them was at least as contingent, capricious and manipulative as any other story I have ever told. Goddamn it… I was making artistic choices.

At a certain point, I decided the footnotes were complete. Perhaps I was simply exhausted by this point and felt I had done a good enough job showing the various possibilities of the idea. This project was amazing, and I’m really proud of it, but I would never call it really complete or resolved.

Oh, by the way, here’s the link. I hope it will be inspiring to others. I hope some other filmmakers will take the parts of it that work for them and improve upon them for their own films. I hope that I’ve made a unique, and uniquely concrete, contribution to the field.

I would never impose prescriptions — or proscriptions — intended to apply to all documentary filmmakers. The dizzying variety of ways that filmmakers negotiate the ethical, epistemological and practical complexities of what I call the documentary promise — the promise to in some essential way tell the truth — is precisely what makes the field so exciting. I agree wholeheartedly with the brilliant writer John D’Agata when he said:

No one in this genre [literary nonfiction] is a lesser writer for choosing one set of restraints over another…. Why can’t we all just do our work, the way we want to, without accusing each other of being “hacks” for not writing exactly the same way? The only judgment any of us really ought to make about one another’s work is whether or not it’s good, whether or not it affects us, whether or not we are transported by it emotionally, intellectually, or perhaps even just technically.

So, whatever: let’s not get too excited.

Maybe you’ll be excited about footnotes, too, or maybe you think it will be the death of cinema. Maybe I won’t even footnote my next film — or maybe I will do it in a different format with different aims.

And let’s not forget that the footnote alone will not resolve every epistemological and ethical problem into a glorious documentary kumbaya. I can already see the denouement of the fictional remake: one year far in the future, the attendants of the Flaherty Seminar make a startling discovery — now that everyone uses footnotes, there’s nothing left to fight about! Fat chance of that ever happening — and that’s a good thing, I think.

Anthony Grafton’s book concludes much the same way; he reminds us that footnotes are only as ethical as the person writing them: “The enemies of truth — and the truth has enemies — can use them to deny the same facts that honest historians use them to assert.” Footnotes really are just another way to tell a fucking story.

Then there’s the fact that the vast majority of human experience — and what can documentary claim to aspire more to do than to reflect the human experience? — simply cannot be verified; how do you annotate a memory, a fleeting but deep impression, a feeling of certitude, the stories we tell to make sense of our lives?

At best, footnotes may provide the audience with two things: 1, a opportunity to evaluate whether the filmmaker has done an acceptable amount of work to honor a documentary code of ethics; and 2, a list of citations for the things that are verifiable (i.e., statistics, archival images, etc.).

We the audience decides whether we trust the storyteller and the story she is telling, based on the evidence we have. Footnotes are just one more kind of evidence we might offer. I simply submit that for some filmmakers, it may be useful evidence.