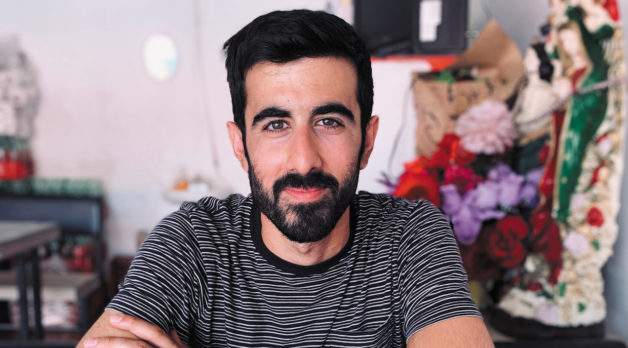 In 2015, Alex Morelli drove through Ely, Nevada, for the first time as part of a larger western road trip. “I’d been researching the history of the west and the extractive economies that have sustained some of these really small, isolated communities,” he recalls. Ely had gone from stagecoach town to copper mining boom and bust before the late 1980s, when a maximum security prison facility was built there, becoming the area’s primary employer. After passing through, Morelli “couldn’t get Ely out of my head” and, with grant money, continued making trips there. When Nevada decided to build an execution chamber in the town, he thought he should talk to someone on death row. After multiple people recommended he speak with convicted murderer Scott Dozier, Morelli sent him a letter and received a response saying that the inmate—sentenced to death in a state that hadn’t executed anyone since 2006—planned to end his appeals. As Morelli recalls, “That was a huge moment of, ‘This is not what I expected.’ I was interested in Ely as the hub of this network of travelers, but meanwhile, Scott was telling me that he’s possibly going to force Nevada to restart their execution machinery, and he wants someone to talk to during this process. The only thing I knew to do at that moment was to leave my phone line open and pick up the phone when he called.”

The correspondence between Dozier and Morelli birthed Untitled Death Row Memory Film, Morelli’s first feature, viewed in advanced rough cut. Shot by Morelli (who also acted as his own editor), Death Row begins at the end, after Dozier’s death in 2019, some time after the correspondence between filmmaker and subject had ceased. Flashing backwards and forwards, Morelli delves into his complicated relationship with Dozier (which, he mentions, had the inadvertent effect of making him a prison abolitionist). Correspondence between the two, along with three hours Morelli actually managed to film at the prison, structure a slow investigation into the facts of Dozier’s past, homicides and desire for death—but, with its thoughtful 16mm compositions, meditative pace and allergy to sensationalism, this is definitely not true crime streaming content, even though at one point Dozier urges Morelli to consider selling his story to Netflix or TruTV. “He was in conversation with some networks in the end,” Morelli notes. “But I think there’s a limit to what’s possible when you are framing it that way. The whole idea of advocating for someone’s innocence often goes hand in hand with throwing other people under the bus. Scott was arguing under his breath that he was innocent of one of these two murders, but he had no problem with people around him being killed, and even intimated that if it were up to him, he might do it himself. Some of the people had done things that, for him, were incredibly horrific.”

Growing up, Morelli was interested in making movies, but thought of documentary filmmaking as “the History Channel and Nova—educational, interview-driven television that I watched with my dad in the morning before I would go to school.” At Harvard, he had his outlook changed by two classes: an eye-opening course on nonfiction filmmaking taught by Robb Moss (who ended up becoming his advisor), then a 16mm class co-taught by Moss and Alfred Guzzetti. “We were shooting double-system 16mm, using magnetic sound and cutting by hand on the Steenbeck,” Morelli says. “It was a totally anachronistic way of making films, but I really enjoyed working with my hands and having to think about exposure and composition, first with the Bolex and then the Aaton camera. Eventually, I became a TA for that class and was doing that for three years. While I was doing that, I was falling for both experimental films and essay films, but also thinking about how I could make films with film. Around that time, I found a dirt cheap Bolex on eBay I snatched up, and right around then I made my first trip to Nevada for the project that would become this film.”

With Death Row (produced by 2021 New Face Daniel Garber) in post-production and preparing for a 2023 festival launch, Morelli continues to reflect on the film’s long and complicated path. “I spent more time on the phone with him during those years than some of my old friends,” Morelli says. “His death was definitely a huge rupture in the process of making the film. We’ve tried to embrace that sense of loss and confusion that accompanies an unexpected death, to try to pick up the pieces and make sense of his life and our friendship.”—VR/photo by Barbara Sostaita