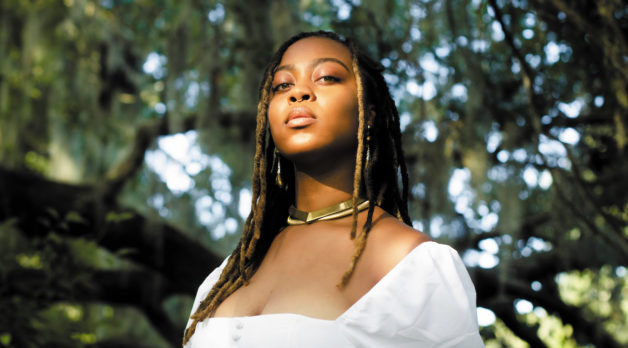 Southern Louisiana–based filmmaker Zandashé Brown’s 2018 gothic horror short, Blood Runs Down, opens innocently. The night before a young girl’s birthday, as her mother brushes her hair for the next day’s party, she asks her mother what she’ll be allowed to do once she’s a year older. It’s a sweet moment of bonding—one Brown severs moments later when the child, remaining awake to try on her new dress, suddenly is struck by some form of possession that both enrages her parent and causes her eyes to bleed.

Acknowledging the complex and at times contrasting traits of a mother-daughter relationship is crucial to Brown’s work, and her films reflect the personal nature of her family’s experience. Raised in the small community of Rosedale, LA., Brown’s earliest adventures in storytelling came from sharing myths, urban legends and ghost stories central to her history-laden surroundings. At a young age, Brown found comfort in the horror genre, admitting that she “grew up on horror. I knew [the genre] better than I did Disney. I didn’t see The Lion King until I was in my late teens. By that point, I was already well acquainted with the films of John Carpenter and Wes Craven.” Joining a high school film club, Brown collaborated on students’ projects and credits much of her filmmaking education—in addition to her time receiving an undergraduate degree at Louisiana State University—to the New Orleans Video Access Center (NOVAC) and New Orleans Film Society (NOFS).

Although productive, this moment in Brown’s life proved tumultuous. “My late high school/early college years were a really difficult time for my family,” Brown admits. “I had to take on more responsibilities to keep my siblings together after my mom had a health crisis.” This experience in part led Brown to writing and directing Blood Runs Down. “It had been six years since I had spoken to my mother, who had had a bit of a mental breakdown,” Brown says. “I spent that time thinking about her and missing her a lot. I was confused by how I was mourning someone who was still alive. Blood Runs Down was my way of making sense of that time in my life, of what generational trauma and memory could look like. I had even started to question my memory of our encounters and how I saw her, and that [made me] realize how delicate of an act it is to remember something.”

The film was awarded Best Louisiana Short at the New Orleans Film Festival in 2018.  Her just-completed short, Benediction, currently being submitted to festivals, stars Ma Belle, My Beauty’s Idella Johnson as another woman seeking comfort from a familiar source only for it to turn sinister—in this case, during her visit to an unfamiliar church. Brown is eager to follow those interests into production on her first feature, The Matriarch, selected for the Sundance Screenwriters Lab and awarded the Institute’s Horror Fellowship. She also recently pitched the project at The Gotham’s Project Market, where the logline read: “When the death of an estranged matriarch summons a fractured family back to their rural Louisiana hometown, a forlorn teen attempts to forge a relationship with her late grandmother through ancestral veneration and unlocks instead a deceptive world of spirits, secrecy and hysteria.”

Brown recently stepped down from her role as the Artist Engagement and Programming Manager of New Orleans Film Society after, in 2020, one career highlight was achieved: moderating the cast and crew reunion of one of Brown’s favorite films, Kasi Lemmons’s Louisiana-set drama, Eve’s Bayou. (Available on YouTube, the conversation will be included as a special feature on the film’s new Criterion release this year.) As her career continues to garner attention, Brown isn’t sure she’ll ever be tempted to leave her home state. “The weather and the people will humble you,” Brown says about southern Louisiana, “but in the sweetest, most nurturing of ways. You’re reminded that there are greater beings and bigger powers in control, whether forces of nature or of spirits or ancestors. I find a lot of comfort in that, and it’s not something I find in most places.”—EL/photo by Lee Laa Ray Guillory