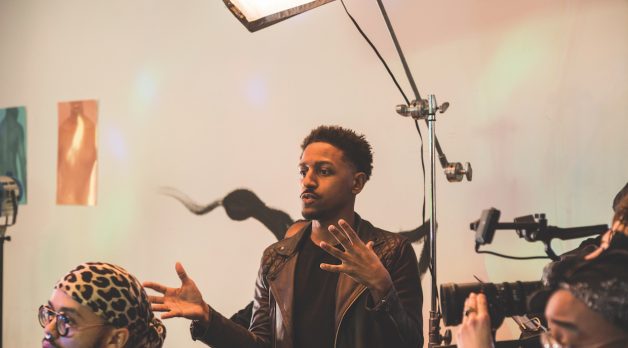 Dr. Aymar Jean Christian is the Midwest’s great connector for a diverse generation of web series innovators. He began the Open TV (OTV) platform in 2015 to define “what queer and intersectional TV looks like” and remains its head of development. In his 2018 book, Open TV: Innovation Beyond Hollywood and the Rise of Web Television, Christian writes that the web “allows for smaller-scale productions to appear, and at times thrive. It embraces difference for its relevance to diverse lives…. The pursuit of big scale haunts legacy television, instilling a fear of cultural difference in executives.”

Christian had been researching web series for years and discovered a need for networks of support. “Indie creators were innovating, developing shows differently, but I saw the need for an organization to provide structure, disseminate knowledge,” he says. “OTV doesn’t produce, just distributes and exhibits. Ultimately, every project is artist driven. My most useful function is introducing artists to producers and production companies and to members of our community who can assist with crowd-funding.”

Open TV’s highest profile production so far has come from Brown Girls, Fatimah Asghar’s collaboration with Sam Bailey, released in 2017 before its HBO pickup and Creative Arts Emmy nomination. This year, 16 projects have been released, with many more slated for 2019. “I’ve been blown away by the creativity coming from Chicago’s intersectional artists,” Christian says. “I truly believe OTV is releasing the best indie TV in the country. Not ‘the best indie TV by diverse artists,’ but the best. Period. The quality of our programs exceeds those of much better funded short-form distributors that take artists’ intellectual property, lock them into exclusive contracts and don’t have even our Emmy nomination or track record of sales and exhibitions.”

“I started OTV to innovate the development process,” Christian continues. “TV shows in Hollywood sell because they have the ‘right’ people attached: celebrities with large social media followings and national brands. But, ultimately, TV shows live or die on character and story. That’s our focus: quality storytelling that’s sincere, authentic, real. And, as a research project currently at Northwestern University” — where Christian is assistant professor of communication studies — “our development pipeline could be backed by data and research, not just buzz.”

Christian directed and produced Hair Story, his first pilot since 2015, this year. Residents of a co-op tell their stories while a drag queen, Gia, does their hair. “Their tales are represented as music videos or Drunk History–style narrated scenes,” Christian says. “The pilot focuses on characters Curtis and Gia. Gia talks about how she struggles to perform drag after a homophobic and transphobic attack; her ‘hair story’ is a music video by Chicago MC Roy Kinsey, whose music video, BSAYF, I produced with queer hip-hop label Futurehood. My TV projects are always highly collaborative. I don’t make art for myself but for my community. I produce what I want to see in the world. I love to push the boundaries of representation. I get frustrated that so much of black media is heteronormative and feel the need to direct my own work in the hope of opening people’s eyes to the richness of the black American experience.” — Ray Pride/Photo: Jackie Christian