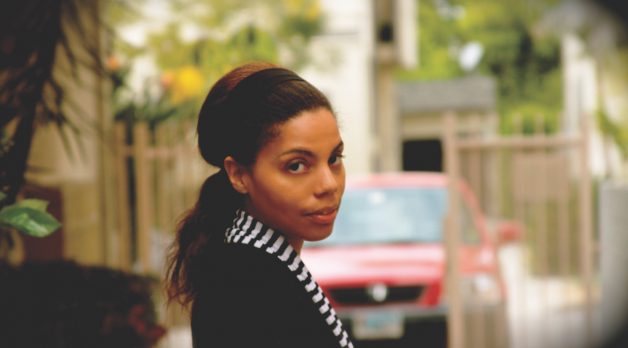 In half a page, we meet 17-year-old Turquoise Jones, the titular character of Channing Godfrey People’s feature script, Miss Juneteenth. It’s June 19, 1999, and Turquoise has won Fort Worth, Texas’s annual “Miss Juneteenth” pageant, which commemorates the day in 1865 when slaves were emancipated in Texas—more than two years after Abraham Lincoln signed the Emancipation Proclamation. Riding on the back of a convertible, waving to the crowds, Turquoise is “young, happy and hopeful.”

Hard cut. It’s present day, and Turquoise is scrubbing toilets in the women’s room of the ramshackle Wayman’s Bar & BBQ. Whatever dreams may have existed in the breathless moments after her pageant coronation 20 years ago are ones Turquoise now hopes to pass on to her defiant 14-year-old daughter, Kai. As Turquoise explains, it’s not just a pageant—the winner also receives a full college scholarship. “I still don’t understand having a pageant to celebrate slaves gettin’ they freedom late,” Kai replies.

Getting ready for a 2019 shoot, Miss Turquoise will be Fort Worth–native Peoples’ feature debut. About the origins of the project, Peoples explains, “I was never a ‘Miss Juneteenth,’ but I wanted to be one–I went to the pageant every year.” Growing up, Peoples hoped to become a singer or actress and studied theater at Baylor University. But, she says, “I didn’t see the more complex roles as an African American woman, the roles that reflected the worlds I knew.” Enrolling in USC’s School of Cinematic Arts and getting on a writing and directing track was the way she empowered herself. “I could create the worlds that I was seeing.”

Peoples, along with producer and fellow USC grad Neil Creque Williams (“He has been a force for the film,” she says), started developing Miss Juneteenth right out of film school. “I’m always fascinated by stories of people whose dreams are deferred, whose lives don’t turn out as planned,” she says, noting her script’s thematic linking of personal and political history. As Miss Juneteenth went through various drafts, Peoples honed her voice, realizing that one of her strengths was writing arrestingly good vernacular dialogue. She and Williams submitted the script to a string of screenwriting competitions, reasoning that each submission would result in more feedback. The script wound up a Nicholl semifinalist, an American Zoetrope finalist, a Sundance Creative Producing Summit selection, an IFP Film Week pick, and it recently received an Austin Film Society grant and the inaugural SFFILM Westridge Foundation development grant. Peoples was also an Austin screenwriting fellow, where Charles Burnett mentored her. And Texas production company Sailor Bear (A Ghost Story) has joined Williams to produce.

Director and showrunner Kat Candler read the script and hired Peoples as a staff writer on Queen Sugar. (Peoples wrote two episodes on in season three.) For now, though, Peoples is excited to jump from her home in L.A. back to “Cowtown”–the affectionate nickname for her Fort Worth, Texas neighborhood–for the prep and shoot. “I believe specificity is what sets stories apart,” she says, “and there’s a richness here—juke joints, funeral homes, an African American cowboy culture and a community that wants to see themselves represented on screen.” — SM/Photo: Neil Creque Williams