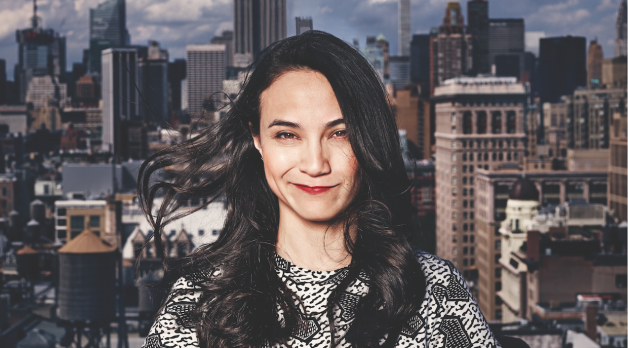 Who was that back-up zombie dancer, Jimmy Fallon asked after a talent showcase at the Upright Citizens Brigade (UCB) in New York. And, he wanted to know, could she submit a writing sample to his show?

Cirocco Dunlap began her performing career in high school musicals in her hometown of San Francisco and joined improv and comedy teams in college at UC Santa Cruz. After graduating, moving to New York and pursuing sketch comedy classes at UCB, she proved she could write as well as she danced and landed herself a job in the writer’s room on Late Night with Jimmy Fallon.

Now a staff writer for TBS’s upcoming Miracle Workers, Dunlap says, “I love 80% of the professional writing process, but when it comes to acting, I cannot stand auditioning. And I hate memorizing lines.” However, when Topic — First Look Media’s new digital platform — commissioned five of her short films as a series called Everything Is Okay, her agent pitched her as part of the project, assuming she planned to perform.

Directed by Adam Sacks, each episode is its own self-contained story starring Dunlap as your everyday NYC millennial navigating dating issues, dystopian nightmares and post-apocalyptic alternate realities. It’s a web series in which small, oddball moments of recognizable behavior coexist with grand sci-fi concepts — like a moment in “Robot: Episode 1” where Dunlap’s character, after sending her robot simulation to a party in her place, refuses to leave her couch and uses a fork to drag her iPad closer across the floor. (“It’s very disgusting, and it’s something I really did,” she says.)

Dunlap’s prose has been published in The New Yorker and McSweeney’s, and she’s written two picture books for Random House. It was her popular New Yorker piece, “N.Y.C. to L.A. to N.Y.C. to L.A., Ad Infinitum,” that piqued Topic’s interest. She didn’t adapt this particular story for the series, but translation from prose to screen is generally her process.

Dunlap says she’d like to write a feature or book but instead gravitates toward short essays and films because they’re economical. “I always want to know how I feel about an idea before I start talking about it,” she says, noting that her best ideas come from painful or strong personal experiences. Dunlap is patient while developing story ideas, but she also doesn’t wait around for inspiration to strike: “In creative professions, it’s really just about learning to be effective as a business person and scheduling your time efficiently.” She’ll dedicate three two-hour sessions per week to meet deadlines but “sometimes ignore the deadline completely and end up eating a taco and staying up until 4 a.m. to finish. But I like having the goal in place.”

About larger career goals, Dunlap says, “Five years ago, they were, ‘Please god, tell me what to do.’ Right now, the goal is only to take a job if I learn from it or if I love it.” — TH