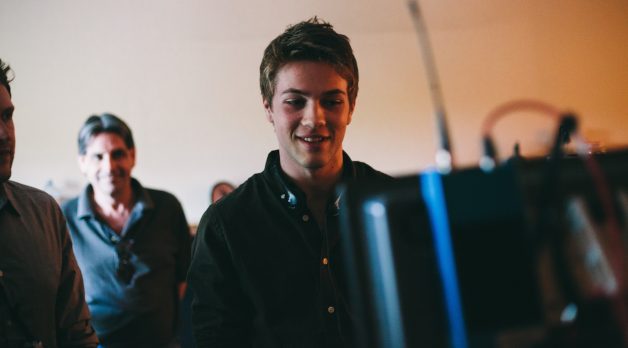 At press time, Connor Jessup is generating Emmy buzz for his heartbreakingly intense work as Taylor, a collegiate victim of sexual assault on the second season of John Ridley’s ABC series, American Crime. And he’s the lead in Closet Monster, Stephen Dunn’s uncanny coming-of-age tale due out this summer from Strand. But, on the phone from Toronto, we’re talking about Asian cinema. Apichatpong Weerasethakul, Hayao Miyazaki, Hirokazu Kore-eda, Yasujirō Ozu — when the 22-year-old tells me about the filmmakers who are influencing his young directing career, they are all great directors from Japan, Thailand, Korea and elsewhere in the East.

“There’s a specific feeling of movie that almost only exists there,” he explains. “Movies concerned with small gestures, gentle rhythms. The closest [English-language] comparisons might be Ira Sachs or Andrew Haigh.” Jessup is also drawn to the way certain Asian filmmakers deal with the supernatural. “In the West, we associate horror with jump scares and some sort of heightened emotion, whereas in Asia, and in Japan in particular, there’s a vast mythology around ghosts. Ghosts can be benevolent and live side by side with humans. It’s a much more mundane conception of the supernatural. I want to make [films] that exist at the intersection of the fantastic and the ordinary — the place where those things meet is curious to me.”

Jessup’s second short film, Boy, which premiered at the 2015 Toronto Film Festival, exists precisely in that liminal space. It’s an elegantly directed and beautifully modulated tale of a boy who dies in a freak bicycle accident and whose after-life presence follows a school friend home, quietly observing the patterns of his family’s grief. Jessup’s next short, Lira’s Forest, will again tackle a supernatural theme with the following interconnected work, Simon’s Forest, which he plans to shoot next summer, expanding the story world even further. “It’s about a boy who is quite sick who goes to stay with his grandmother in her house by the sea and who meets a strange boy living in a nearby forest. He has white hair, yellow eyes and a smooth, white fox mask. It’s like low-key Miyazaki meets Kore-eda.”

Jessup is fluent with his references, but he’s also aware of the dangers of drawing upon them too much. “It’s a big worry of mine,” he says. “If you took the jungles of Thailand in Uncle Boonmee Who Can Recall His Past Lives or Tropical Malady and replaced them with the forests of northern Vancouver, would it have the same impact or be received the same way? Seems doubtful, right?” But, he continues, “You can enjoy Uncle Boonmee without knowing the intricacies of Thai mythology and politics because the imagery and detail is so strong. My hope is that if I use my own personal mythology — a weird mishmash of Western European foundational myths, fairy tales and cinema — and keep strong imagery and an attention to detail my films will achieve a similar effect and feel.”

And when it comes to his acting, Jessup says he’s tries to focus away from cinema references. “One of the hard things about acting is you realize that most of the choices you are making are not because they are in any way truthful to your experience but because you’ve seen other people in movies make them,” he explains. “If you’re playing a funeral scene, you think, ‘these are the seven choices.’ But, no, those are just the seven ways you’ve seen people act in funeral scenes. Performances beget performances beget performances, and they become divorced from reality.” He credits American Crime co-star Lili Taylor with helping him toward this realization. “She’s phenomenal,” he says. “She makes choices that are simultaneously surprising and, at the same time, totally obvious. You know, if you go to a funeral in real life, people are weird. They react in unexpected ways. They don’t follow a paint-by-numbers guide to emotion. To tap into that — that’s the challenge.” — S.M./Photo by Calvin Thomas